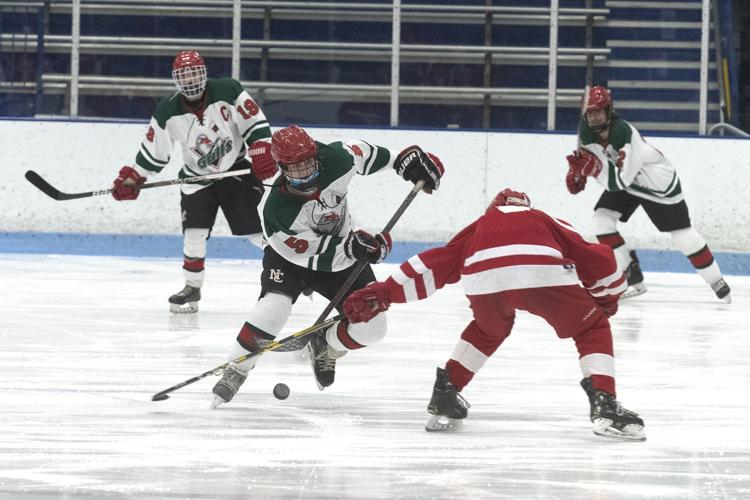 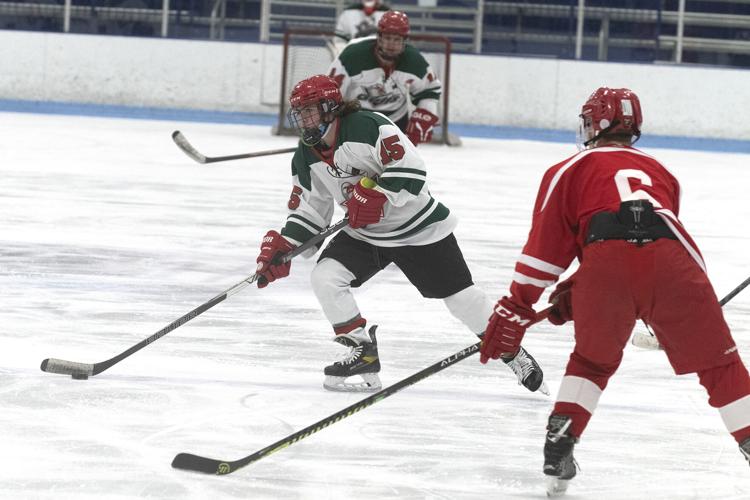 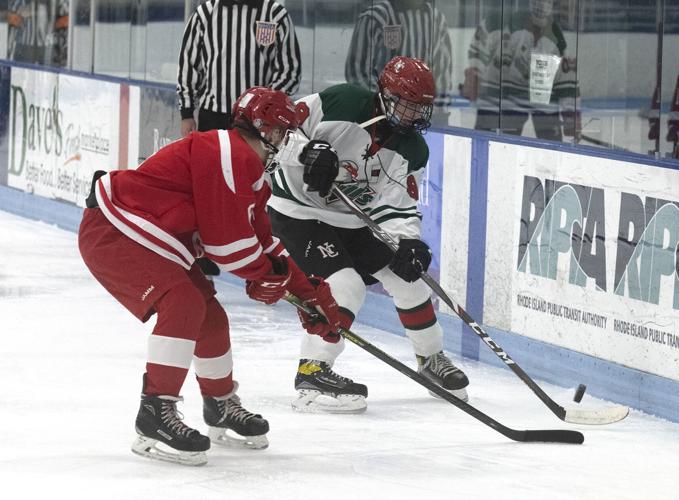 SOUTH KINGSTOWN — The Narragansett/Chariho co-op hockey team set a new program record for victories in a season on Saturday night.

That it came in the first half of the year, against first-place Coventry in impressive fashion, is a sign that the Gulls aren’t going to stop there. The co-op squad beat the Oakers 3-0 at Boss Arena to move to 4-3 in league play as its hopes for a breakthrough season continued to materialize.

“It’s been a long journey, with a lot of improvement over the years. A lot of losses,” senior Nicolas Keegan said. “This is the first time I think we’ve ever won four games in a season. I remember since freshman year, we always thought, ‘We might have a chance this year,’ and then we’d end up with like two wins. But we stuck with it, just getting better and better. A lot of it came with changing the culture. This senior class, we have a lot of hard-working guys. We’re all really close. We kind of changed the culture. We want to win. It’s a different attitude in the locker room.”

Saturday’s win was part of a perfect weekend for Nariho, which beat West Warwick/EWG 5-2 on Friday night. The division is looking more and more wide open with every passing week, and after years of struggles, Nariho is firmly in the mix.

“All these games are going to be tight,” Nariho head coach Ryan Meade said. “The top five right now are all right there. It seems like anyone can win. It’s going to be a fun end of the year. Things are starting to come together for us. We’re finally starting to click.”

It’s happening despite constantly changing lineups. Rolling COVID issues have kept the Gulls from playing at full strength, but they’ve made it work.

“We’re still down a few key players every game,” Meade said. “We haven’t played with a full varsity roster, but we’re making the best of everything, getting the lines right, getting the game plan together and executing. It’s working.”

Rob McHugh starred in Friday’s game, netting four goals and an assist. The win snapped a two-game slide and had the Gulls feeling good about Saturday’s matchup with Coventry.

Two first-period goals set the tone for Nariho, which had lost to Coventry in the season opener and in a holiday tournament matchup. Keegan had a goal and two assists for the Gulls, while Mason Campbell made 31 saves en route to the shutout. It was the first time all season that the Oakers were kept off the scoreboard.

“First game of the year, you don’t know who the top guys are going to be,” Meade said. “Having a better understanding of who their best players are, getting the right guys on the ice to match them. And obviously, playing a team for the third time, you have a better idea of what they’re going to do and do what you can do to counter that. It’s tough to beat a team three times in a row. We felt like we could have an advantage coming in and we did. We were able to cash in.”

Jacob Correira staked the Gulls to an early lead with a goal less than three minutes into the game. Keegan and Sean Lyons assisted. The action was fairly even from there, but the Gulls also scored the next goal on a strange sequence. Off a scramble on the right post, with players on both sides seeming to assume that the puck was covered, it instead slipped into the net. Keegan was credited with the goal.

“I told the guys before the game that Nariho is a different team from the last time we played them,” Coventry coach Ray Lamont said. “We had watched them play last night before our game. We knew they were going to be prepared and ready and they were.”

Coventry managed to kill off a five-minute major penalty in the second period to keep it a 2-0 game but couldn’t get that score to the locker room. Keegan made a quick pass from behind the net to Lyons in front for Nariho’s third goal of the game, with 1:18 left in the period.

“Coventry, for us, was the team to beat,” Keegan said. “We lost to them twice. Season opener, we came out flat. Played them in a tournament and it was close. Overall, this is the closest game we’ve had against them. I think this is one of the best games we’ve ever played in terms of grinding it out and doing what we needed to do.”

The Oakers put 13 shots on net in the third period but couldn’t get one past Campbell, who finished off the shutout.

On the other side, the Gulls peppered Coventry with 41 shots. Good things tend to happen when they get that many pucks to the net.

“We had two games we lost where we had under 25 shots,” Meade said. “If we get more than 30 shots, we’re going to be in pretty good position to win. That’s what we want to see. That’s our goal.”

And it yielded a significant win.

“It’s a big push for all of us,” Keegan said. “We came into this game confident. We’re still short a few guys but we knew we had what we needed. We have a lot of heart. I think after this, it shows the whole league that we’re one of the top teams in the league.”