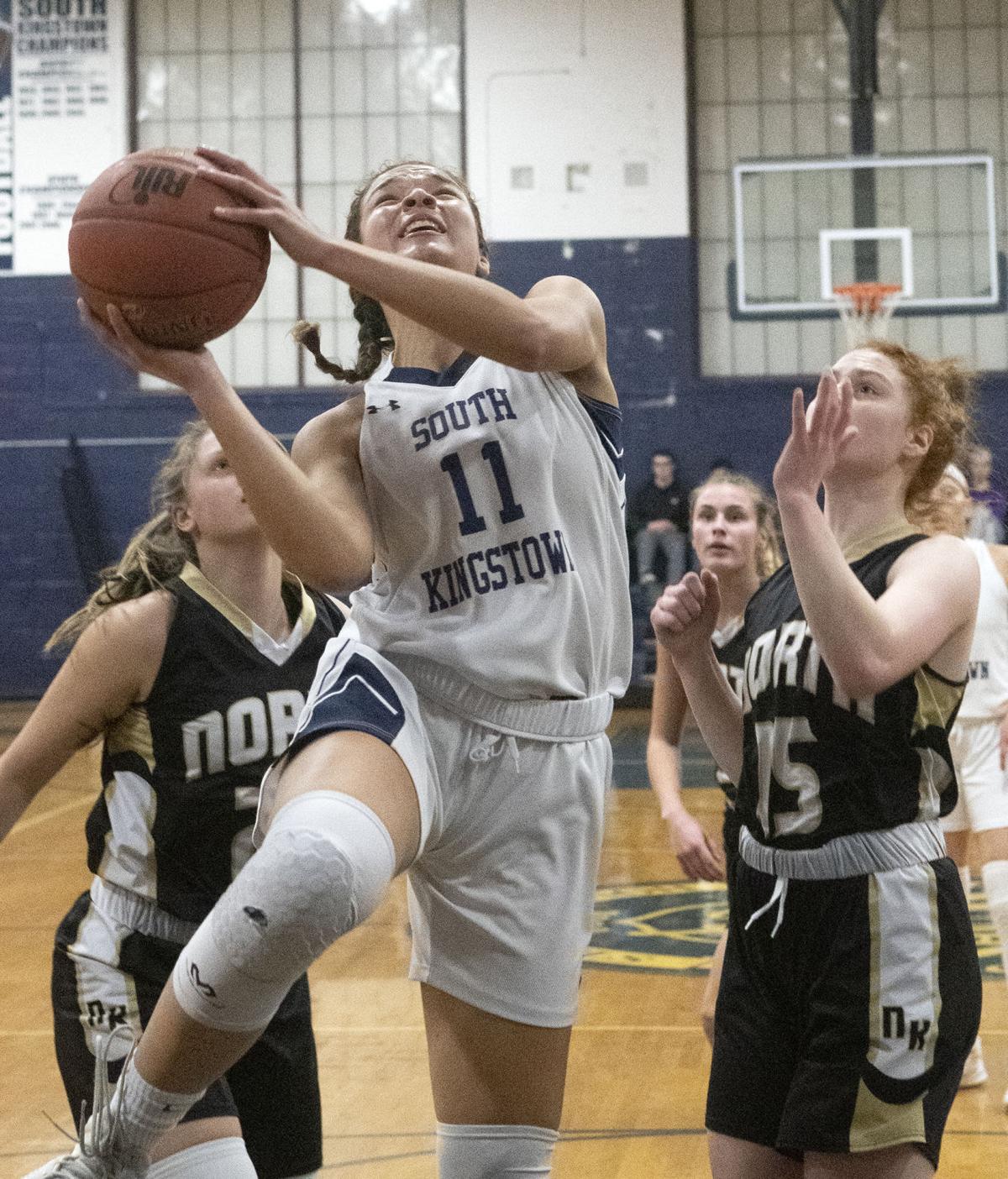 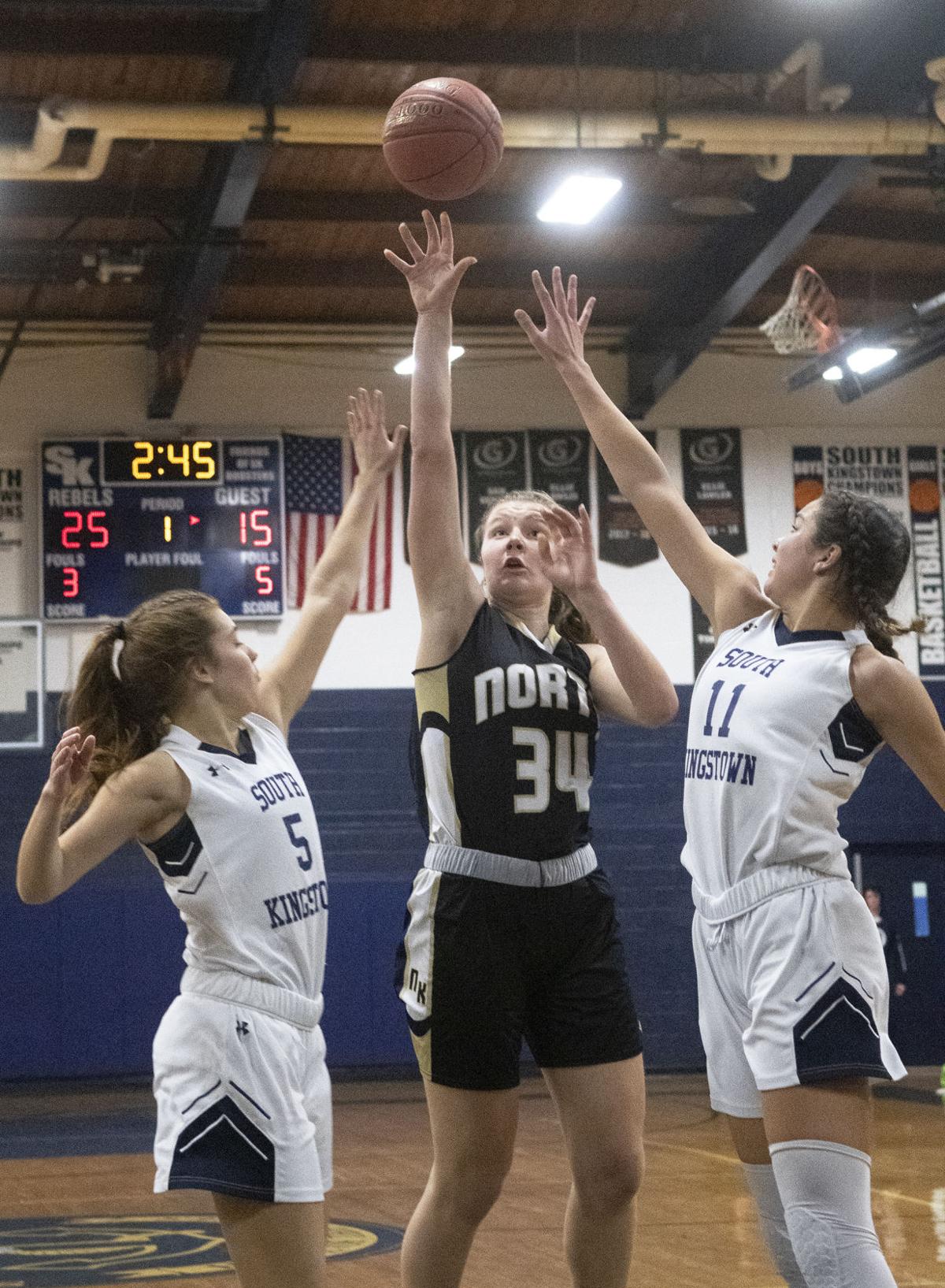 SOUTH KINGSTOWN — The second showdown with a fellow Division I contender went better than the first for the South Kingstown High School girls basketball team.

Two weeks after falling to St. Raphael for their first defeat, the Rebels welcomed rival North Kingstown to town on Tuesday night in a matchup of one-loss teams and reasserted themselves as perhaps the top challenger to reigning state champion La Salle. On the strength of a big run late in the first half and another early in the second, the Rebels beat North Kingstown 53-36.

The Rebels ran their league record to 12-1 ahead of another significant game Saturday at La Salle. They’ve won four in a row since the loss to the Saints on Jan. 29.

The Skippers slipped to 12-2. They had been unbeaten until a trip to La Salle on Jan. 31. They also lost a non-league game to Bishop Feehan before coming back to D-I play with wins over Smithfield and Moses Brown. Having beaten St. Raphael earlier in the season, the Skippers were hoping for another signature win, but saw South Kingstown flex its muscle.

Tuesday’s win continued South Kingstown’s strong response to its first defeat. The roots of it can be traced back to a matchup with East Greenwich just two days after the loss. Three starters were sidelined by the flu, leaving Sydni Vesterholm and Jami Hill as the only typical starters in uniform. Those two led the way and Taylor Martin stepped up with 17 points as the Rebels weathered the storm for a 63-39 win.

“I thought we responded with a lot of heart and a lot of grit and a lot of composure,” Herbermann said. “The game we played right after that, at East Greenwich, three starters out with the flu. Sydni and Jami were the only regular starters playing and I thought they had great leadership that day. We had Taylor Martin come in and go for 17 points, so that helped. That kind of steadied the season for us.”

Mostly back to full health, the Rebels bided their time early in Tuesday’s game, then turned on the afterburners. Leading 19-15, they broke the game open with a 12-0 run. Ten of the points came on the fast break, either off steals or quick outlets after rebounds. Faith Hutchins scored six of the points in the run and Hill had four.

“What killed us in the first half was the transition baskets,” Simeone said.

The Rebels had been leery of North Kingstown’s ability to run, but countered with their own.

“As a coach, you love seeing that kind of basketball. When it’s three-on-two, the girls are very unselfish. They make good bounce passes. They finish,” Herbermann said. “I was worried about their break because I know they like to run. But it was our break that really did the damage tonight.”

It was a 33-21 lead at the start of the second half when the South Kingstown defense took over. The Skippers didn’t make a field goal and scored just a lone free throw in the first 8:53 of the second half. In the meantime, the Rebels went on a 13-1 run for a 46-22 lead.

“Our defense was awesome,” Herbermann said. “I thought we did a great job of getting deflections, getting hands in the passing lanes.”

The Skippers didn’t make their first field goal of the second half until the 5:55 mark, but the jumper by Jordan Moreau that stopped the drought also sparked a run. With Moreau and fellow freshman Jillian Rogers leading the way, the Skippers pushed to a 12-0 stretch to get back to the halftime deficit of 12. It was a good sign for the team, given how the matchup with La Salle slipped away in the second half.

“I looked up when it was 46-26 and I said to the coaches, ‘Are they going to give up or are they going to fight?’” Simeone said. “Then we hit a couple of shots, got some stops, made some free throws. Twelve-point game. It was good to see them fight back. I think that proved to the kids that they could play with them.”

South Kingstown held strong down the stretch, scoring the last five points of the game to stop the Skippers’ comeback attempts.

Hutchins scored a game-high 19 points, a welcome sight for the Rebels. Hutchins was a first-team all-stater last year but opened this year nursing an injury and had been in a slump at the offensive end. She made her first six shots from the field on Tuesday to break out.

“To see Faith scoring the basketball was great,” Herbermann said. “She’s been putting in extra work to get her shot back and it came back tonight.”

Vesterholm and Hill added 15 points each. Carley Fewlass had eight rebounds to go with four points. Hill, a sophomore, is averaging 14.8 points per game since the loss to St. Raphael.

The Skippers were led by Moreau with 14 points and Rogers with 10. They’ll try to bounce back tonight against Cranston West. After that, they draw Rogers and Bay View before closing the season with a rematch against St. Raphael.

South Kingstown is turning its attention to La Salle. Saturday’s game, set for 2 p.m. in Providence, is a rematch of last year’s state finals.

“I’m looking forward to it and I’m sure the girls are too,” Herbermann said. “They’re really good. We have a ton of respect for them. They’re undefeated. I think we’re kind of similar teams. They share the ball, they’re very unselfish. They’ve got four or five girls all averaging more than nine points a game – a lot like us. I’m excited after the way we played tonight.”