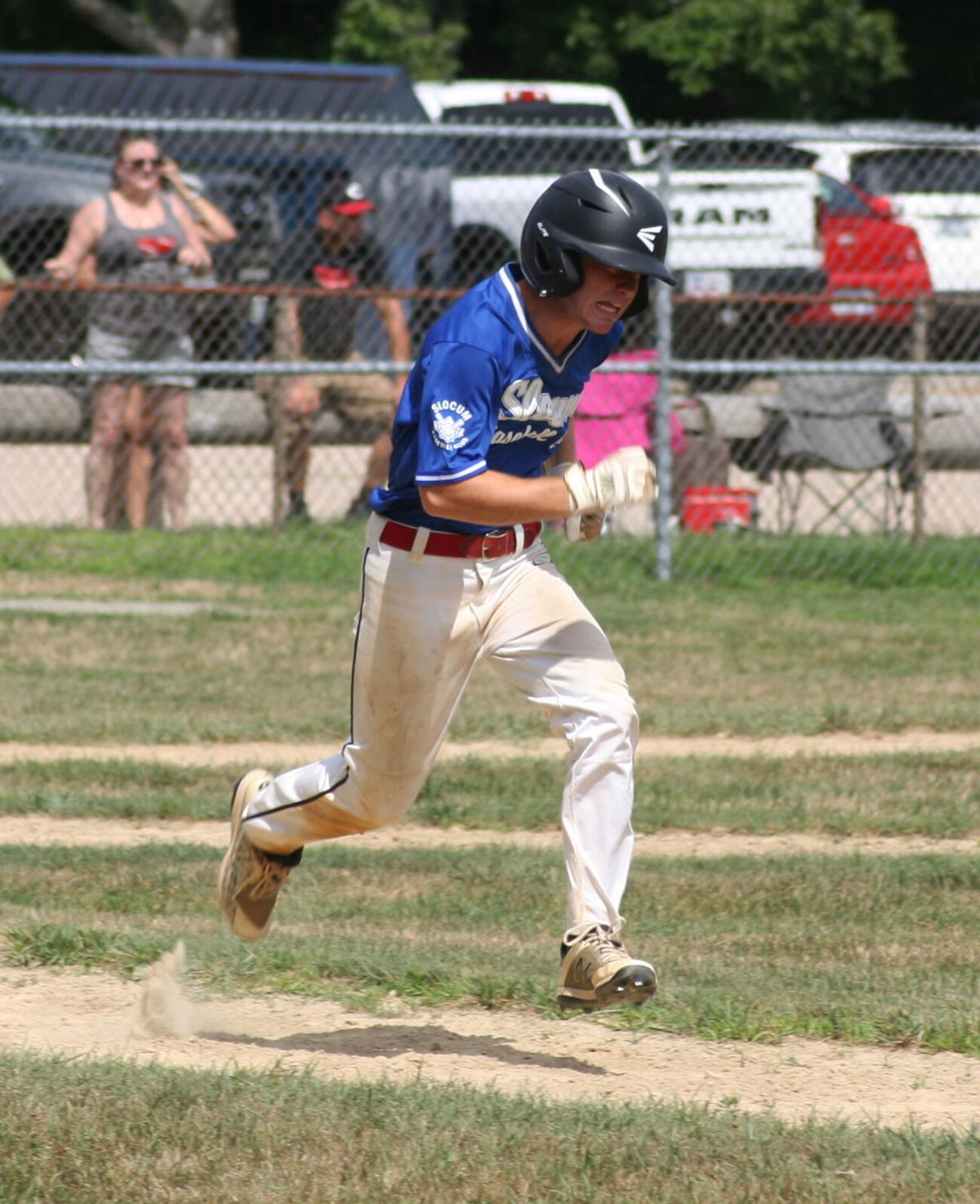 Danny McNeil hustles down the line 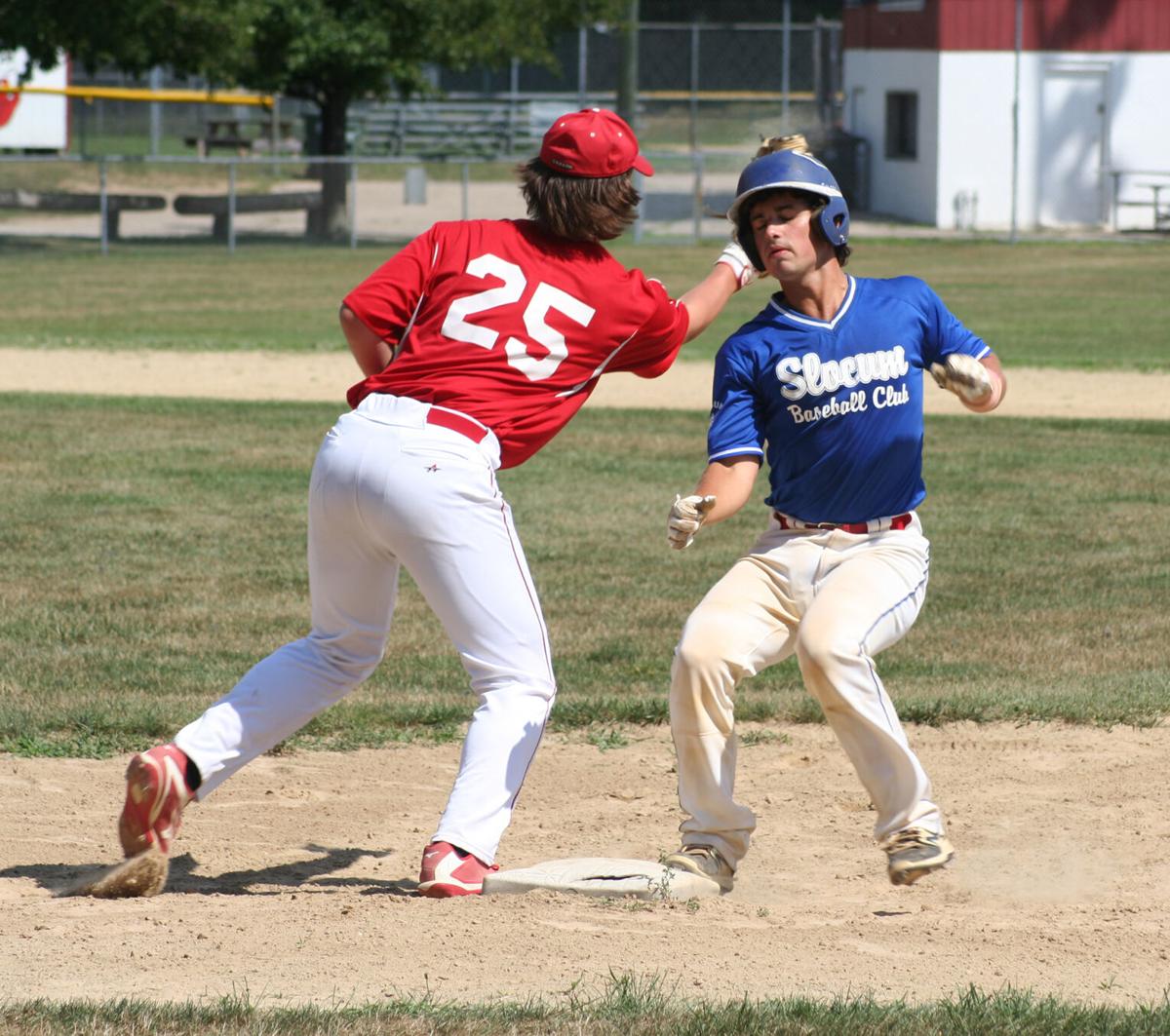 Brendan Kearns gets back to first on a pickoff attempt

Danny McNeil hustles down the line

Brendan Kearns gets back to first on a pickoff attempt

COVENTRY — Owen Caldwell focuses mostly on pitching when he’s playing travel ball, but when he’s moonlighting for the Slocum Baseball Club, he takes some swings.

And he had some big swings on Saturday.

Caldwell drove in the go-ahead run in the fifth inning then cranked a grand slam in the sixth as Slocum pulled away from Coventry for a 13-6 win in Connie Mack action at Paine Field.

“He’s not just a PO – pitcher-only,” Slocum manager Arnie Sarazen said. “With these showcase teams, if they’re pitching, they just pitch. But if you think about it, in Little League, the best pitchers are usually the best hitters, too. They don’t just forget how to hit. So our philosophy is there’s no such thing as a PO. If you’re going to play, you’re going to hit. It’s fun for the guys.”

It certainly was for Caldwell. A rising senior at South Kingstown High School, he lives in the summer with his father in North Kingstown and has hooked on with Slocum this year, in addition to playing for the Merc Elite Rays. Fresh off a strong pitching performance in a tournament a few days prior, Caldwell manned first base on Saturday and delivered at the plate, helping Slocum break through after it fell behind in the middle innings.

“We just won a tournament in Connecticut, which I pitched in. I felt really good,” Caldwell said. “It felt good to come back today and put a bat in my hands.”

Slocum improved to 5-3 heading into the final week of the regular season.

After a win last Monday against East Providence, Slocum gave up a late rally against East Greenwich on Wednesday in a 4-3 defeat. On Saturday, Slocum took a 2-0 lead in the first inning thanks to hits by Brendan Kearns and Aidan Lafferty, a wild pitch and an RBI groundout by Wyatt Daft before Coventry came back with a vengeance, touching up Slocum ace Braeden Perry for five runs in the fourth.

Slocum started its comeback immediately in the next half-inning. Danny McNeil led off with a single, Perry lined a base hit and the rally was on.

“Danny is the sparkplug,” Sarazen said.

Jake Morton followed with an RBI single to score McNeil. After Perry was forced out at home, Morton scored on a wild pitch and Caldwell came through with a two-run single that turned a 5-4 deficit into a 6-5 lead.

“We went up early and it seemed like we were kind of wilting in the sun,” Sarazen said. “Got down 5-2 but we came right back.”

Morton and Caldwell were a tag team again in the sixth. The slim lead grew substantially when Morton stepped in with the bases loaded and promptly cleared them on a double to deep right-center field. Walks to Kearns and Lafferty loaded the bases again for Caldwell, who crushed an exclamation point home run over the fence in right field.

“It felt really good, especially because I don’t really hit much,” Caldwell said. “I was really just trying to make contact and score a run. Luckily, it just went out.”

The seven-run inning put Slocum in control, and Daft kept them there with 3.1 strong innings of relief. Coventry managed a run in the sixth but Daft retired six in a row to finish out the win for Slocum.

The club was set to face West Warwick on Wednesday before the season finale against the defending champion Cranston Bulldogs on Saturday at Lischio Field, with first pitch at 10 a.m. Slocum will likely finish in the top five of the standings, which will result in a bye to the quarterfinals of the playoffs.

Do you believe Rhode Island schools should cancel the fall sports season to slow the spread of the coronavirus?

The Rhode Island Interscholastic League has a blueprint of possibilities and a start date for sports in the 2020-21 academic year, but no final decisions have been made about what the upcoming fall season will look like on fields and courts around the Ocean State. The league shared its thinking on Wednesday in a virtual press conference and in a presentation titled “The Safe Return of Education-Based Athletics” that was sent to member schools. The Principals’ Committee on Athletics – the league’s governing body – has voted to delay the start of fall sports practices from Aug. 17 to Sept. 14. While the league unveiled a model for fall sports and beyond that could be implemented under current state guidelines, no decision will be made until after Aug. 17. With that in mind, do you believe the RIIL should vote to cancel the fall sports season given the current state of the coronavirus pandemic in Rhode Island?