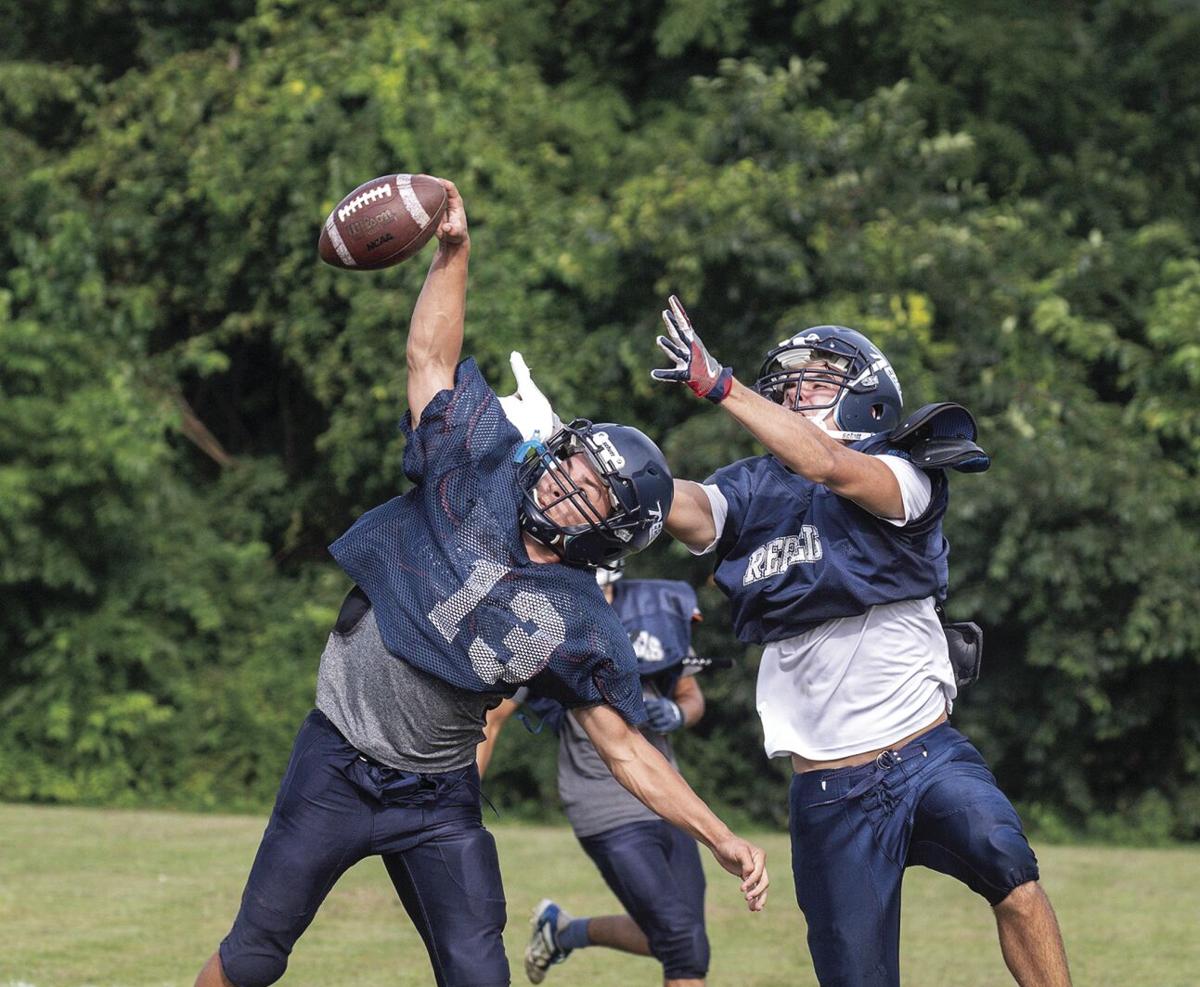 South Kingstown's Isiah Carter, left, breaks up a pass intended for teammate ? during a practice held Tuesday at Hazard Field. 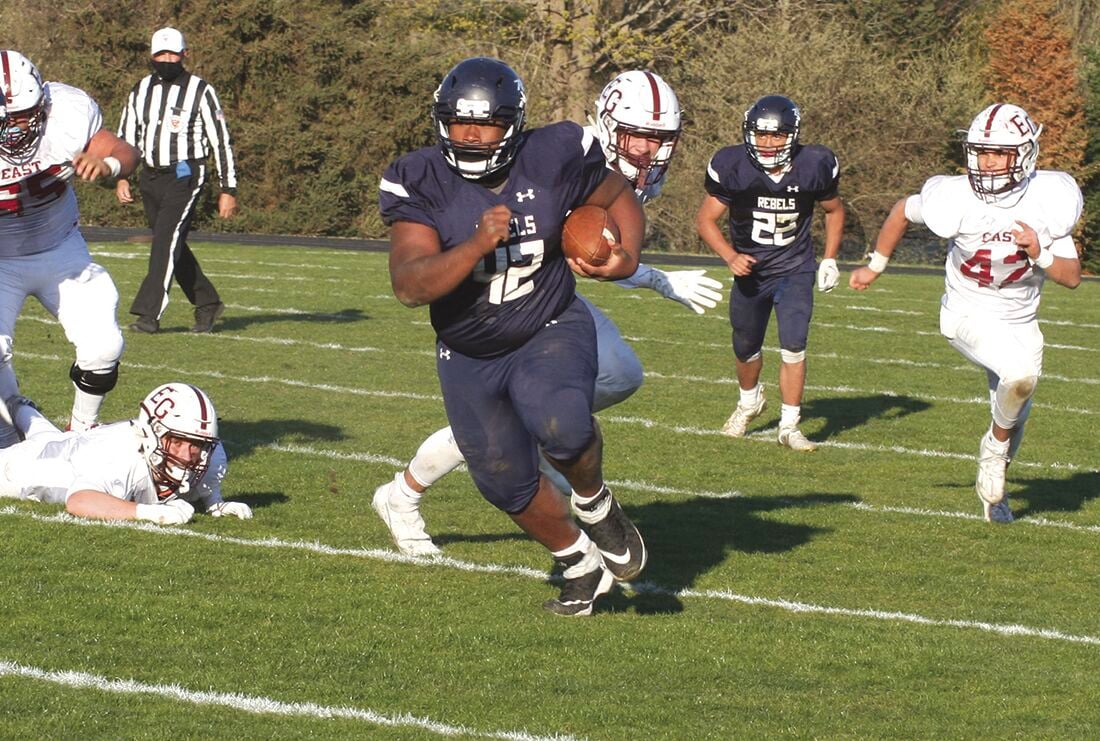 South Kingstown's Isiah Carter, left, breaks up a pass intended for teammate ? during a practice held Tuesday at Hazard Field.

The Rebels didn’t have to wait long.

With the fall season set to begin, the team is eager to get right back onto the field, both to build on its success and to erase the sting of two tough losses that defined its spring campaign.

“I think we had about a month off and now it’s time to get ready,” head coach Gerry Zannella said. “For us, that’s a good thing.”

The Rebels went 2-3 in the spring season, with narrow losses to Central and East Greenwich keeping them out of the playoff field. Central beat the Rebels 25-20 and East Greenwich broke a tie in the fourth quarter en route to a 35-21 win. Those two teams went on to meet in the Division I Super Bowl.

“It was frustrating to say the least,” Zannella said. “We go play Central without one of our key defensive players and we lost in the last three minutes of the game on a long touchdown run. And then in the last game, we go out there without our quarterback and it’s 21-21 against East Greenwich at the end of the third quarter. We were right there against those two teams, who go into the playoffs and play in the Super Bowl.”

For the purposes of this season, those performances provide both confidence and motivation.

“I think it’s very positive because we’ve proved we could be successful,” Zannella said. “We beat Cranston East and Cranston West. We proved we could put points on the board. From a defensive perspective, we proved that we could get after those teams. The way the season ended, I would hope left a bitter taste in our mouths. We could have been at the table for the playoffs. I hope it makes the appetite of the players that much stronger to want another chance. I think they understand what’s in front of them and they know what they need to do to prepare because they did it last spring. I’m optimistic for this group moving forward.”

“The guys that we lost from last year’s group were talented,” Zannella said. “But the number of guys wasn’t overly devastating. A lot of our younger guys have some experience. They have a lot of snaps under their belt.”

Defense may be South Kingstown’s strength. The front seven features five returning starters in Ryan Hazard, Nate Ambrad, Noah Brunelli, Josh Pelletier and Aidan Jones. In the secondary, the Rebels bring back Cade Birrell, Isiah Carter, Lavell Shepard and Kerkor Kassabian. The biggest holes are in the linebacking corps, where the Rebels lost Luke Palazzetti and Rory Hazard to graduation.

“From a defensive perspective, we’re very optimistic that we’re going to be solid,” Zannella said.

The same foundation will lead the offense, with Ambrad, Pelletier and Brunelli up front, along with Jacob Darsch. Rory Hazard will be tough to replace in the backfield after a terrific senior season, but younger brother Ryan had several big runs last spring. Carter and Birrell are also set for carries.

Holland started under center as a freshman and a sophomore, flashing big potential. He transferred to the Hotchkiss School over the summer. In his absence, junior Rian O’Rourke is set to take the reins.

“I think he’s going to be successful,” Zannella said. “He did everything we asked over the summer. He takes the job very seriously and he wants to play well. He wants to put the team in the best position to be successful, and he understands what he needs to do.”

After years of utilizing one of the most run-heavy attacks in the state, the Rebels shifted to a more wide open approach in the spring season. Even with Holland gone, that style will remain.

“You’re not going to get the athletes coming out if you’re not doing those things. We want the best athletes in the building to play football in the fall at South Kingstown. Those athletes that play those other spots, they want the ball in the air, they want to run and go get it and make big plays in the air.

“From years of running the ball and banging it up in there, to be a very good running team you have to play flawlessly. You can’t afford to go offsides. You can’t afford a holding penalty. Whereas, when you’re 50-50, you can make some big plays in the air. You’re never out of first down range when you’re throwing the ball well, especially when you’re getting it into the hands of some of the people we have. They can take a five-yard completion and take it to the house. You put those guys in one-on-one situations and you’ve got a chance to make big plays.”

“I think our schedule is as tough as anybody’s in the state,” Zannella said. “We’re going to play three of the power four teams. Our guys are going to see the best of the best in Rhode Island week in and week out. We’re trying to prepare as best as we can and pray that we stay injury free so that we can keep our best players on the field.”

The Rebels will work to develop depth with their younger players, while hoping their top group can carry the load and build on their spring showing.