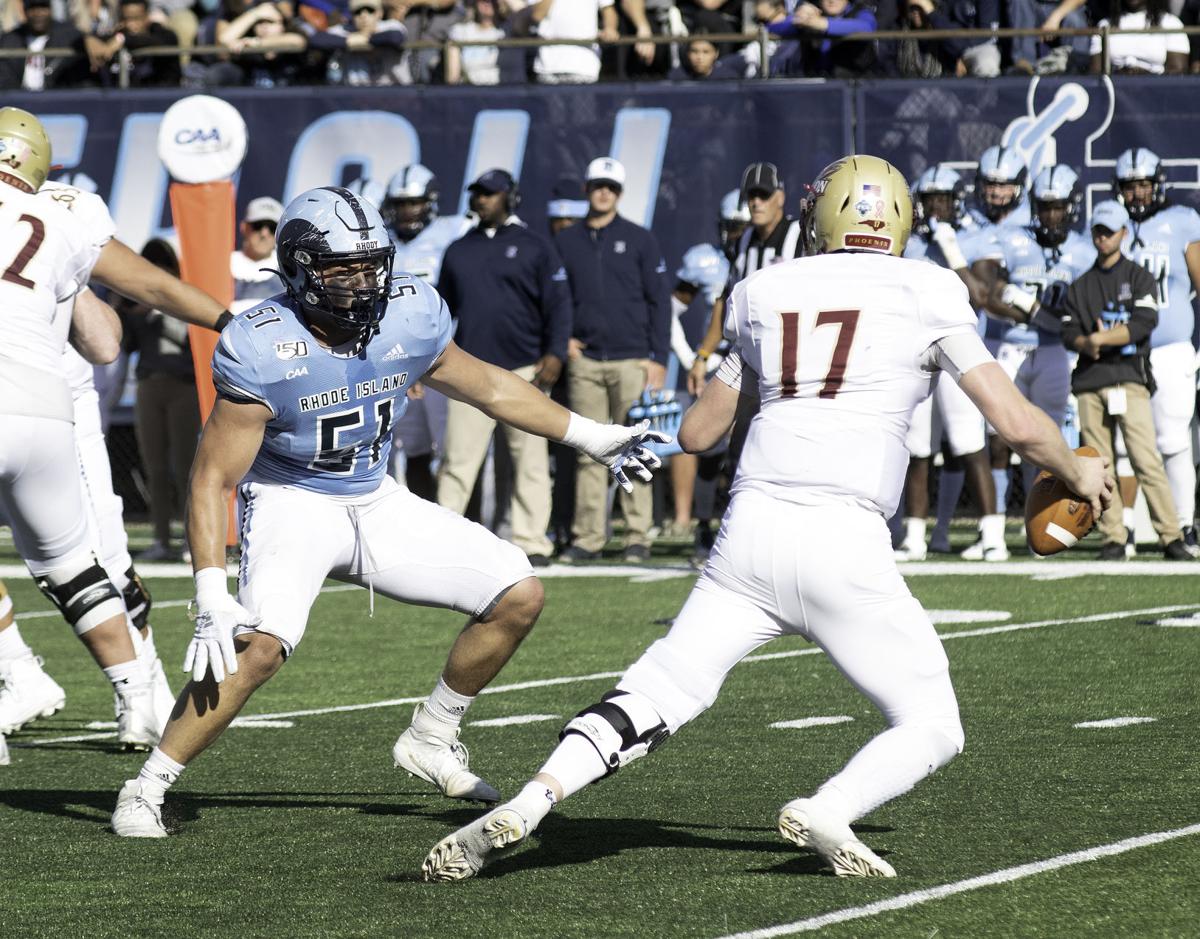 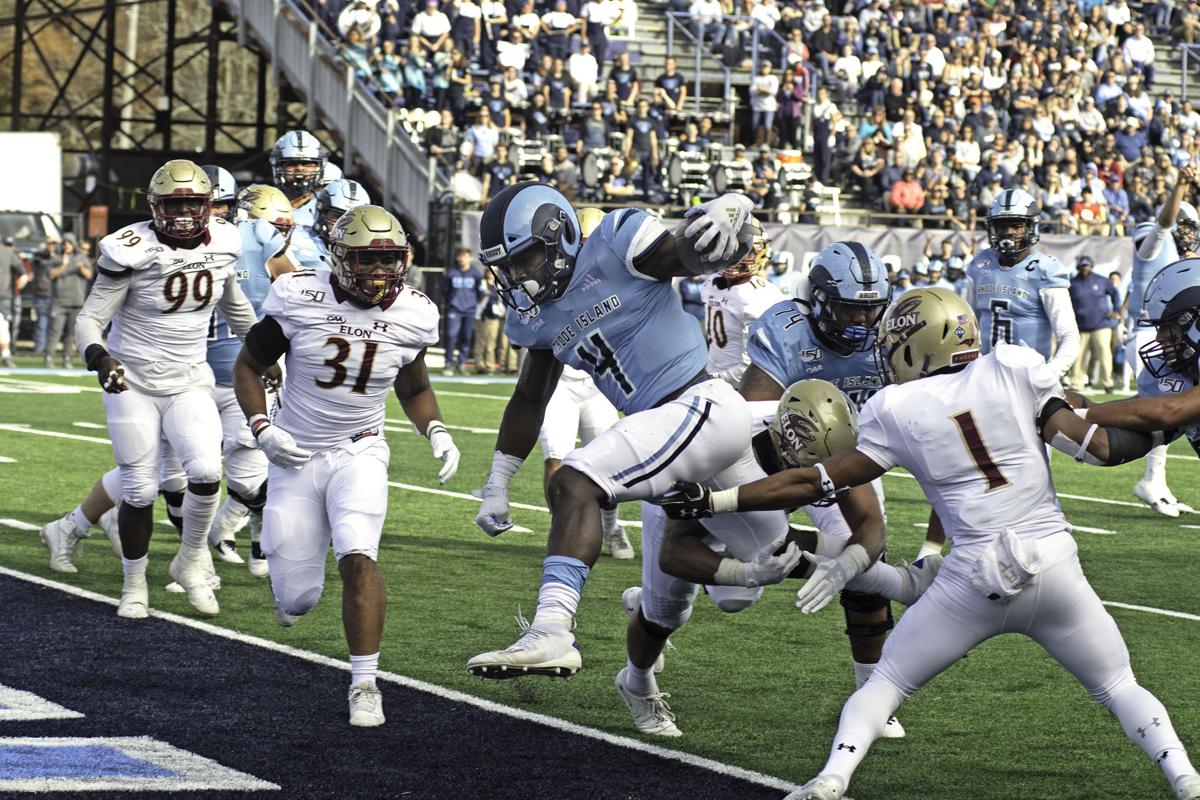 URI's Zoe Bryant Jr. leaps into the end zone for a touchdown during Saturday's game against Elon at Meade Stadium.

URI's Zoe Bryant Jr. leaps into the end zone for a touchdown during Saturday's game against Elon at Meade Stadium.

Things got better for the home team as those fans settled into their seats, but an emphatic turnaround by the Phoenix in the second half eventually sent a lot of supporters home early.

After URI took its first lead early in the third quarter, Elon scored 28 unanswered points and cruised to a 38-13 victory. The defeat spoiled URI’s homecoming festivities and dropped the Rams to 1-7 and 0-5 in Colonial Athletic Association play.

“We were playing on hope today, just trying to get this thing started and go win out,” URI head coach Jim Fleming said. “But it was a bad performance . . . You always credit the opponent, but we played our worst football game. That’s pretty evident.”

Five turnovers put the Rams behind the eight ball, including a fumble on their second play from scrimmage that set up Elon’s first score. One additional fumble and three interceptions by Vito Priore also proved costly, with the second pick accelerating URI’s unraveling. Elon was up 17-13 when it picked off the pass, returned it to the 3-yard line and immediately scored. It was the second time that Elon scored one play after a URI giveaway.

“You’re just not going to win a game with the amount of turnovers we committed,” Fleming said.

The lopsided margin represented new territory in conference play for the Rams, whose four previous CAA losses had all been by eight points or less. The season continued to slip away from the Rams all the same, with a losing record now guaranteed.

“We had great expectations coming into this year, and we’ve had some incredible heartbreaks,” Fleming said. “The missed opportunity today was disappointing, to not continue to play well enough to be in a position to win.”

Priore fumbled the snap on URI’s second play, and the Phoenix recovered it. On the very next play, Davis Cheek found Avery Jones for a 25-yard touchdown and a 7-0 Elon lead.

URI’s defense pitched a shutout over the rest of the first half, but its offense struggled to take full advantage. Several drives stalled, while an interception and a muffed punt also hurt the cause. The Rams settled for two C.J. Carrick field goals as Elon took a 7-6 lead into halftime.

The Phoenix added to their cushion with a field goal before URI took off with a 75-yard scoring drive. A 37-yard pass from Priore to tight end Hunter Gorgas set up a 2-yard touchdown run by Zoe Bryant that made it 13-10.

After a URI punt, Elon went to Baughman again. A change-of-pace quarterback who subbed in at times for Cheek, he busted a 67-yard touchdown run to make it 31-13. Brelynd Cyphers ran it in from a yard out for Elon’s final score with 8:24 left.

The 28 unanswered points went on the board in 10 minutes, 38 seconds.

“It was really anybody’s ballgame,” Fleming said. “Give up the turnover and the score. No flinch, kept on playing. Battled into the second half. Then all of a sudden, the same kind of stuff that happened last week against Albany kind of blew up on us. Those things are hard to figure out, and we have to get it corrected.”

Priore had thrown for at least 286 yards and at least one touchdown in every game this season, but was held to 211 yards and no scores by Elon. He completed 23 of 47 passes. Star receiver Aaron Parker was also quiet, catching three passes for 52 yards, both season-lows.

Four games remain for the Rams, beginning with a non-conference matchup against Merrimack on Saturday.

“We’ve been on a brand new football field that we haven’t won on yet. There’s some disgust there on everybody’s part,” Fleming said. “We’ve got a good Merrimack team coming in here next week. We’re going to have to line up and find a way to beat them, and then try to get a couple of conference victories.”

Have you or a loved one been laid off from work due to the coronavirus pandemic?