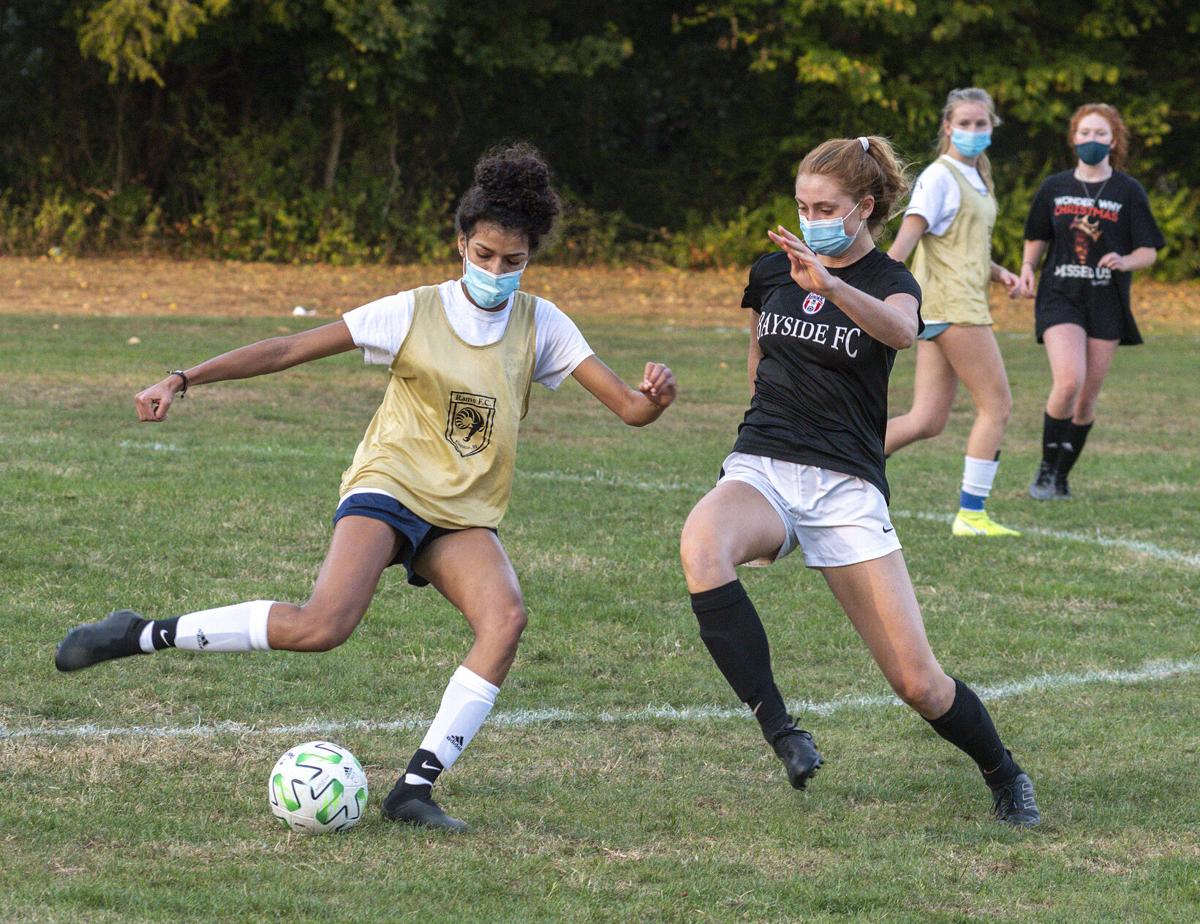 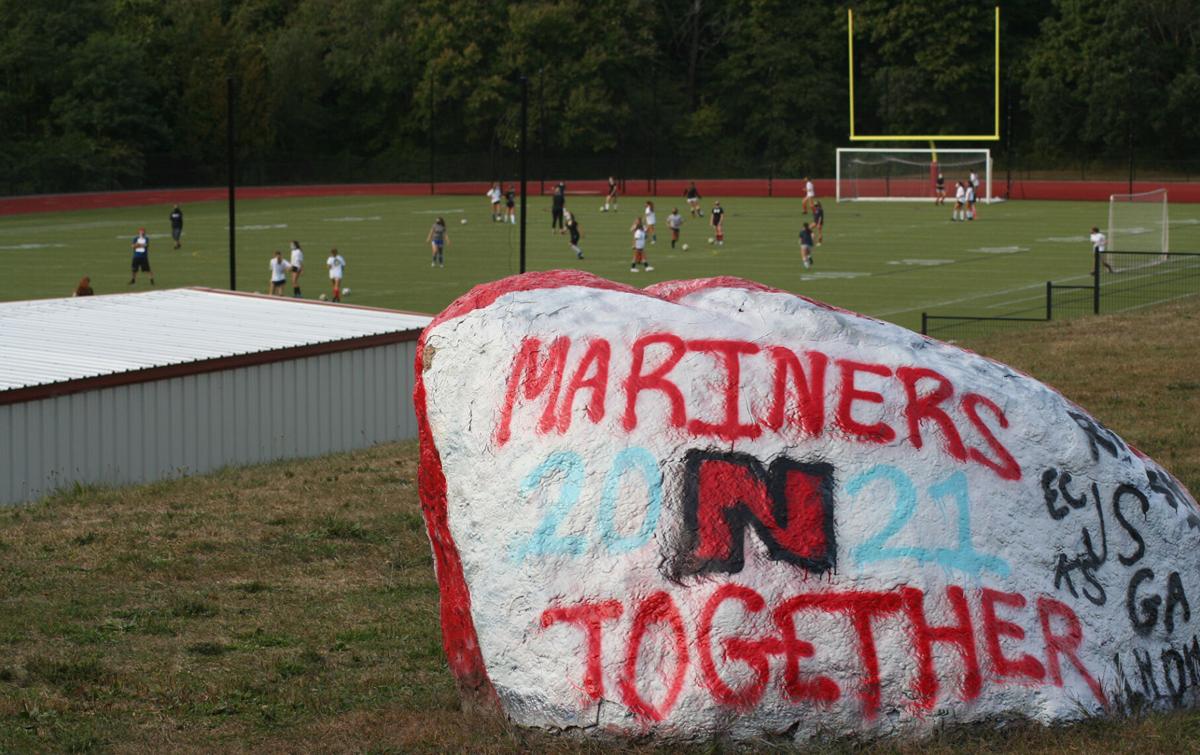 A rock with the slogan Mariners Together. Behind, the Narragansett girls soccer team practices. 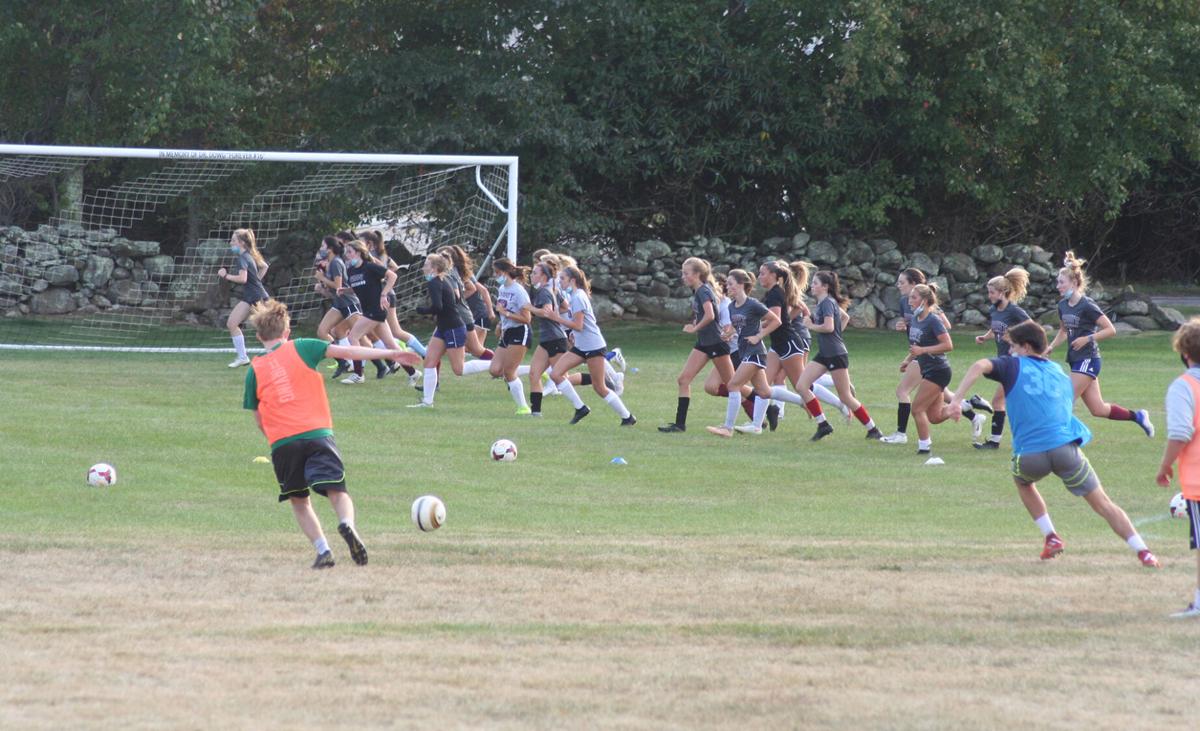 The Prout boys and girls soccer teams practice on Tuesday

A rock with the slogan Mariners Together. Behind, the Narragansett girls soccer team practices.

The Prout boys and girls soccer teams practice on Tuesday

It was unseasonably cool, far different from the hot weather that typically accompanies the start of practice. Backpacks and gear sat in a grid on the sideline, six feet apart. Water breaks included pumps of hand sanitizer. Every player wore a mask.

And they were ready to play.

“For me and I’m sure for all of us, we’ve been waiting for so long,” said senior captain Jane Carr. “We were supposed to start August 17. Obviously, we knew something was going to change. Just being out here today and seeing everyone, even though we do have the masks, is a sign of hope with everything going on in school and everything that’s happened. It’s really exciting.”

Monday marked the start of official practices for the Rhode Island Interscholastic League’s modified fall season as soccer teams, cross country squads and girls tennis teams around the state began prepping for a season amid the coronavirus pandemic. Games due to begin in early October will be the first high school athletic events in Rhode Island since March 12.

Fields that sat empty all spring were suddenly back to full use when school bells sounded this week. At North Kingstown, soccer and field hockey teams took the turf for tryouts and practices, while cross country runners jogged through nearby neighborhoods. At Prout, the soccer field was split in half for the girls and boys teams, while tennis players filled the newly-renovated courts. The Narragansett Community Athletic Complex – with an entrance once covered by caution tape – had girls soccer on the field and boys soccer players waiting in the stands for their turn.

It was in many ways back to normal, even if it’s not the same.

“It’s great,” South Kingstown head coach Scott Rollins said. “It’s obviously colder than usual to start our season, but it’s awesome for the kids, seeing them out here running and getting back to – I hate the phrase new normal – but to some kind of normal.”

Some of the Rebels got together for once-a-week summer sessions. As that offseason work trickled into August – and the original start date for fall sports – players and coaches could only wait and hope. Soccer teams, in particular, weren’t sure what would happen. Preliminary plans for fall sports included the possibility of only tennis and cross country getting the green light, with soccer and field hockey moving to the spring.

Gov. Gina Raimondo and the RIIL on Sept. 4 announced a plan that included soccer and field hockey, while volleyball and football were pushed to the spring.

“They just want to play,” Rollins said. “I think there was a little bit of frustration seeing their younger siblings playing youth soccer and then there was back-and-forth about whether we were playing. Now, I think everyone is just excited.”

“For us, it’s our senior year,” said senior captain Anna Kelly. “The thought of losing it was heartbreaking. I think we’re all just excited. Even though we may only have five or six games, we get those games and we get some type of competition and something to look forward to.”

The mandate to wear masks while playing hasn’t put a damper on things for the Rebels. It’s not ideal, but they’re making it work.

“It’s a little bit challenging, but it’s just something different you have to get used to,” Kelly said. “I’ve been doing fine with it.”

One benefit of the mask rule is that gameplay will remain essentially the same, something not every soccer player in the region can enjoy. When Rhode Island’s status was still up in the air, Massachusetts announced rule modifications that prohibit headers, slide tackles and intentional physical contact between players. Rhode Island will have no such limits.

“Without the mask, it would be a whole different game – new rules and everything,” Carr said. “With the mask, it’s not great, but the game is still the same.”

And players know what they’re doing is helping their own cause when it comes to having a season.

“We told them today, ‘Let’s stay safe and healthy and not be the team that causes this to fall apart,’” Rollins said.

About 40 players were on the field for the Rebels on Monday, divided into groups that largely stayed together. Rollins and his staff have opted not to make cuts this season, so they’ll keep the full allotment of players.

“These kids have already taken enough bumps and bruises, so it didn’t seem like the right thing to do,” Rollins said. “We’re going to have some larger teams, some kids who might get put on JV who normally wouldn’t, but the alternative was to give these kids another round of bad news and I didn’t feel comfortable doing that.”

It was instead mostly good news on Monday.

“It’s really great to be back out here,” senior captain Carley Fewlass said. “Obviously, we’ve all missed it so much. With the restrictions, it’s been tough. And not having the social interaction at school, it feels good to be able to come here and see everyone again, get some energy out.”

The Rebels are also looking forward to some competition. It’s been a while.

“We have a title to defend,” Kelly said.