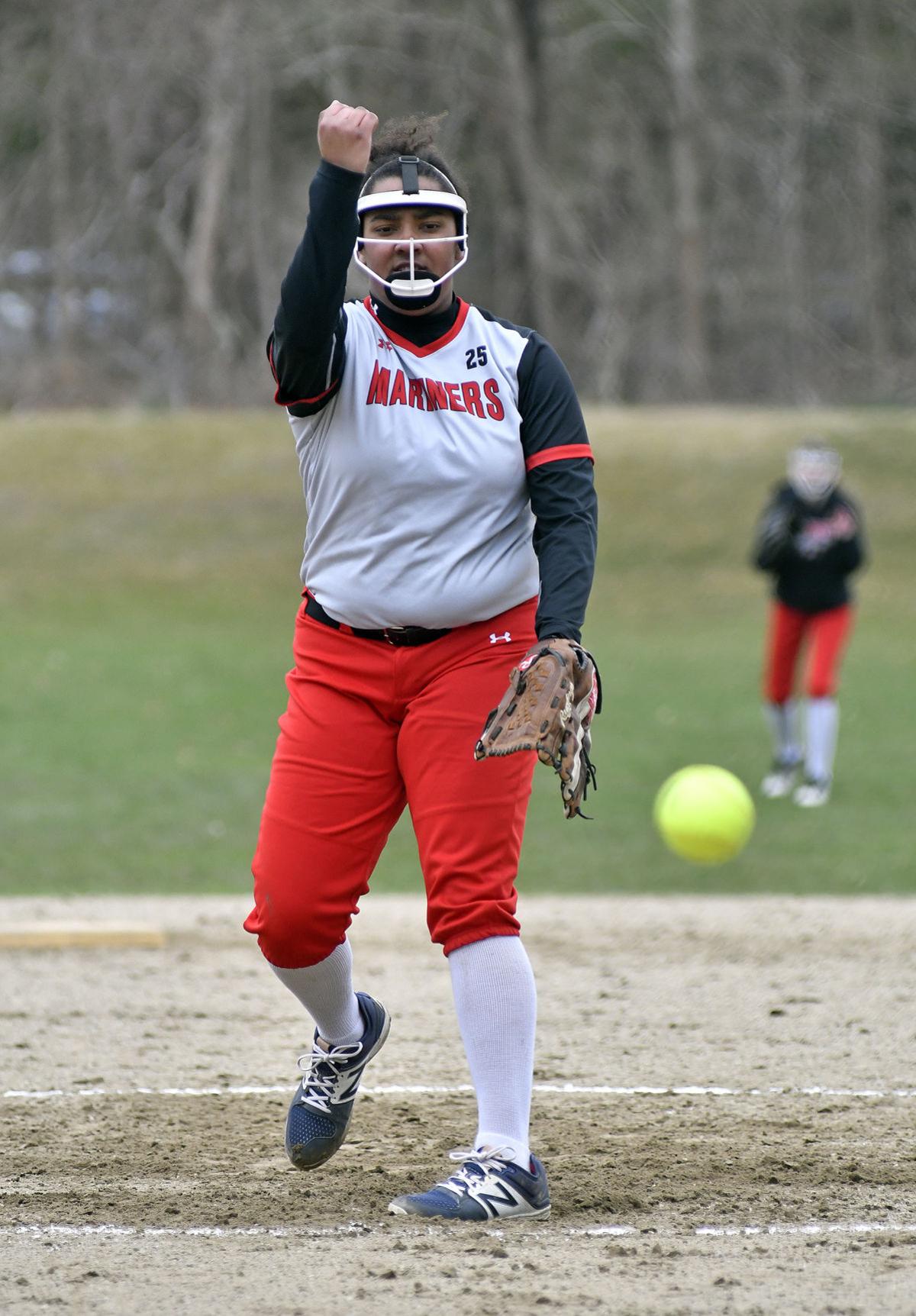 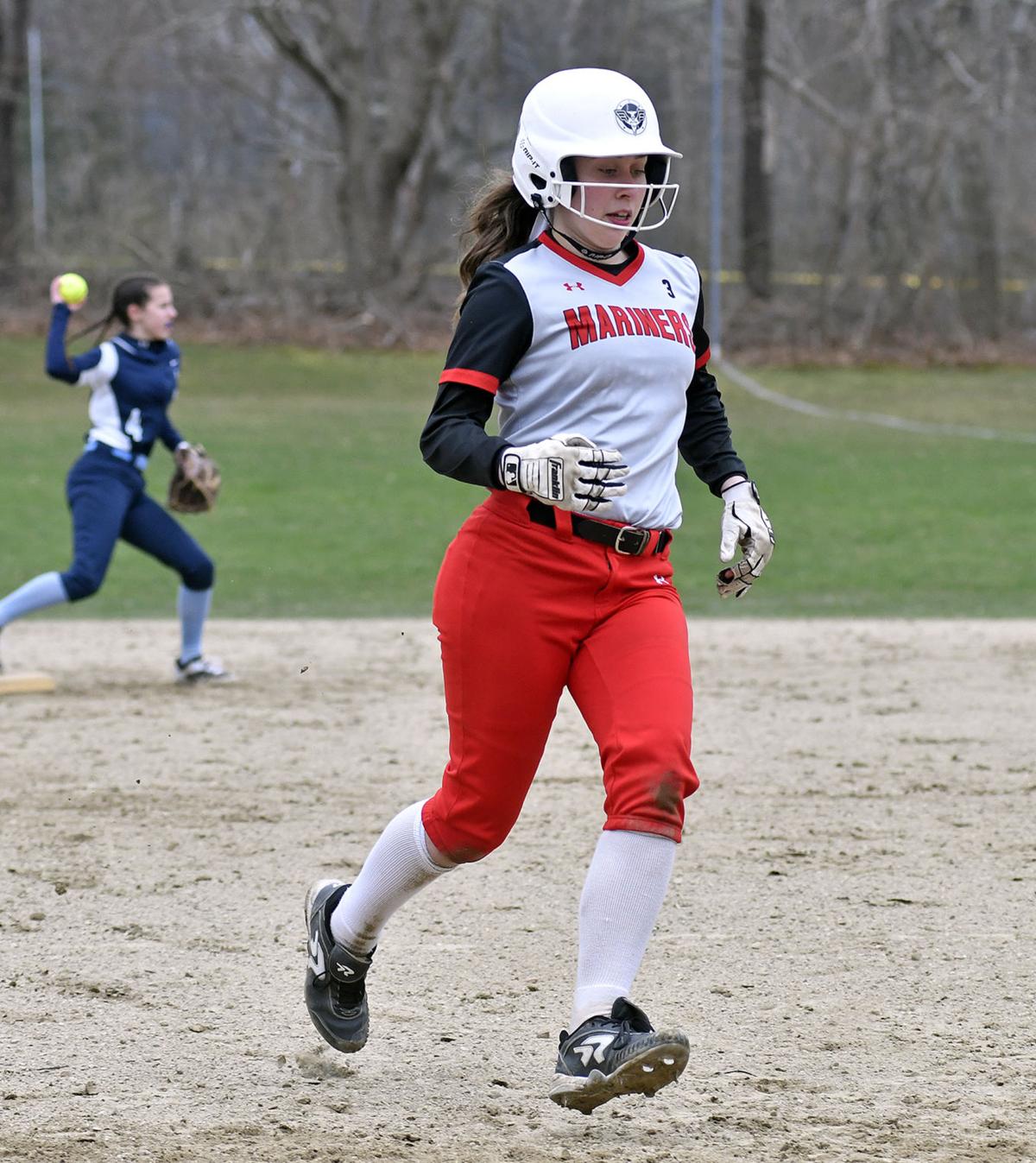 Narragansett's Hannah Foster races to third base during a game last season.

Narragansett's Hannah Foster races to third base during a game last season.

Some games last season, Hannah Foster was in the pitching circle for the Narragansett softball team, throwing to her twin sister Abby behind the plate. Kianna Fanning might have played third base that game, then taken over pitching duties the next game. She played catcher plenty of times, too. Abby Foster even pitched once.

“And I am not a pitcher,” she said with a laugh.

But it was what the team needed, and the most talented and experienced players on the Mariner roster were also willing to use their versatility for that purpose.

“I’ll play wherever they need me,” Fanning said.

The trio of flexible and multi-talented seniors helped get the Mariners moving in the right direction the last few years. After a 4-13 campaign in 2017, Narragansett went 8-9 in 2018 and made additional headway last year with a 9-7 season. They made the playoffs in both 2018 and 2019 and were hoping for more this year, before the cancellation of the spring sports season.

“We had players that were committed,” Hannah Foster said. “They were willing to try their hardest and they were dedicated. For me, my personal goal was to win a playoff game. We’ve made it but we’ve never won a game. I was definitely super hopeful for that.”

This season would have been a milestone in long and successful softball careers. Fanning started playing T-Ball at Narragansett Little League, then switched to softball. A few years in, when she was trying out for another season in the minor league division, she was told it might be time to move up.

“They said if I stayed in minors, I was going to hurt somebody,” Fanning remembered. “I was a lot more experienced than the other girls my age, so I moved up to majors a year early.”

Every step of the way, from her Little League days to the travel ranks, Fanning loved it. She was encouraged to play basketball and volleyball because of her height, but nothing compared to her favorite sport.

“It just came really easy and natural to me,” Fanning said. “I could see it and so could my whole family. I stuck with it because I did enjoy it and a lot of my friends played, too.”

She made an immediate impact at Narragansett, with her Little League experience helping the transition. Head coach Mark Paliotti, who took over the program in 2017, had a talented young player starting at the same time.

“When I got to high school, I was playing with all the girls I played with in Little League, so it wasn’t too different,” Fanning said. “It was scary at first, but my coach believed in me. I listened to whatever he said because he knows the game pretty well and he knew what I could do.”

Fanning was a freshman on the team that went 4-13. The Foster twins provided reinforcement the next year. They had spent their freshman year at South Kingstown High School before transferring in order to join Narragansett’s Agriculture Science and Technology Program. The program was a good fit for the twins, who have shown cows for many years, are 4H members and plan to study animal science and veterinary medicine in college.

The softball team was also a good fit, providing increased opportunity for two experienced and talented players. The Fosters have been playing since they were 6 years old, starting in T-Ball, then moving into slow pitch and transitioning to fast pitch. They followed in the footsteps of their mother, who was a standout softball player at Mount St. Charles.

From an early age, the sport was a big part of life.

“Just the competition and cheering everyone on, working together,” Hannah Foster said. “Winning feels so good. The hardest teams you don’t think you can beat, you’re so proud of yourself. The hard work pays off.”

The Fosters always had a connection on the diamond, with Hannah often pitching to Abby.

“Other coaches took a while to notice, but when we pitch and catch together, we read each other’s minds,” Abby Foster said. “Coaches learn that after they put in a different catcher for my sister. We communicate well.”

Along with Fanning, they anchored a potent lineup that could put a lot of runs on the board. The seniors were expecting more of the same this year.

“I feel like we were going to do pretty well,” Fanning said. “We’re not the best, but we’re not terrible either. We’ve got some good players. We had a lot of freshmen that were going to try out, so we were pretty excited for that.”

The cancellation was tough to handle.

“I was so bummed out and sad because I love softball,” Fanning said. “It’s my life. It’s been hard because normally, I’m always doing it. I play year-round, I practice year-round. It’s weird not to play.”

The team was able to be together briefly, for off-season captain’s practices before the effects of the pandemic took hold.

“We were lucky enough that we were able to host captains practices,” Abby Foster said. “We were thankful we could at least come together as a team for that.”

Softball careers may continue. Fanning is planning to play at CCRI. Abby is set to attend LSU and Hannah is planning to go to Iowa State, but they may also end up at CCRI to start their college careers if in-person classes aren’t happening in the fall. And they would try to play softball in that case, a silver lining.

They’ll also be cheering on their alma mater, a program they left in a better place than they found it.

“At first, it was a little bit of a rocky start,” Hannah Foster said. “It definitely moved forward. We definitely had some players before who would approach it like, ‘Oh, we’re going to lose.’ They’re all looking at it in a better sense, looking at it in a positive way instead of a negative way. It’s definitely a lot better.”