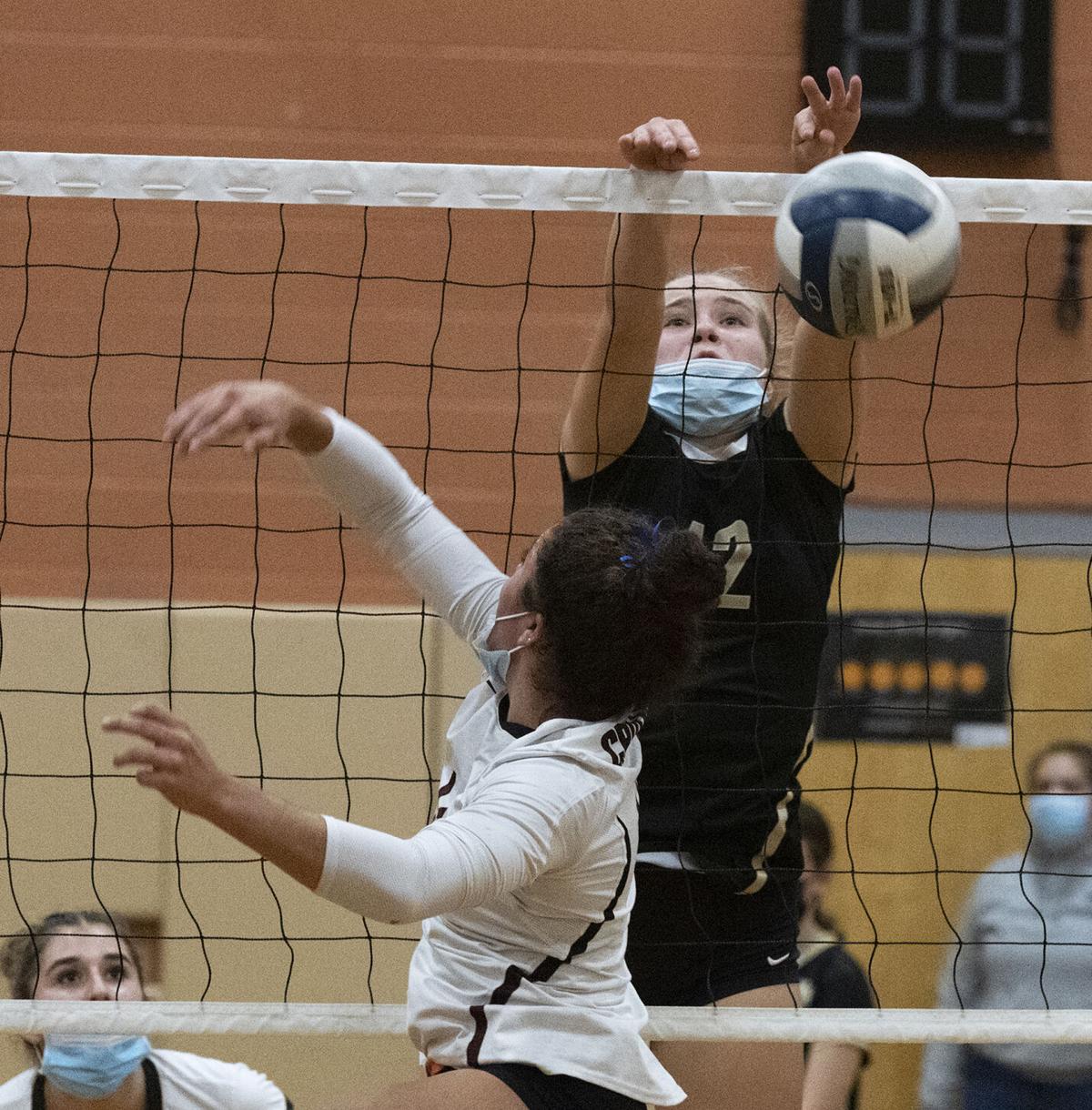 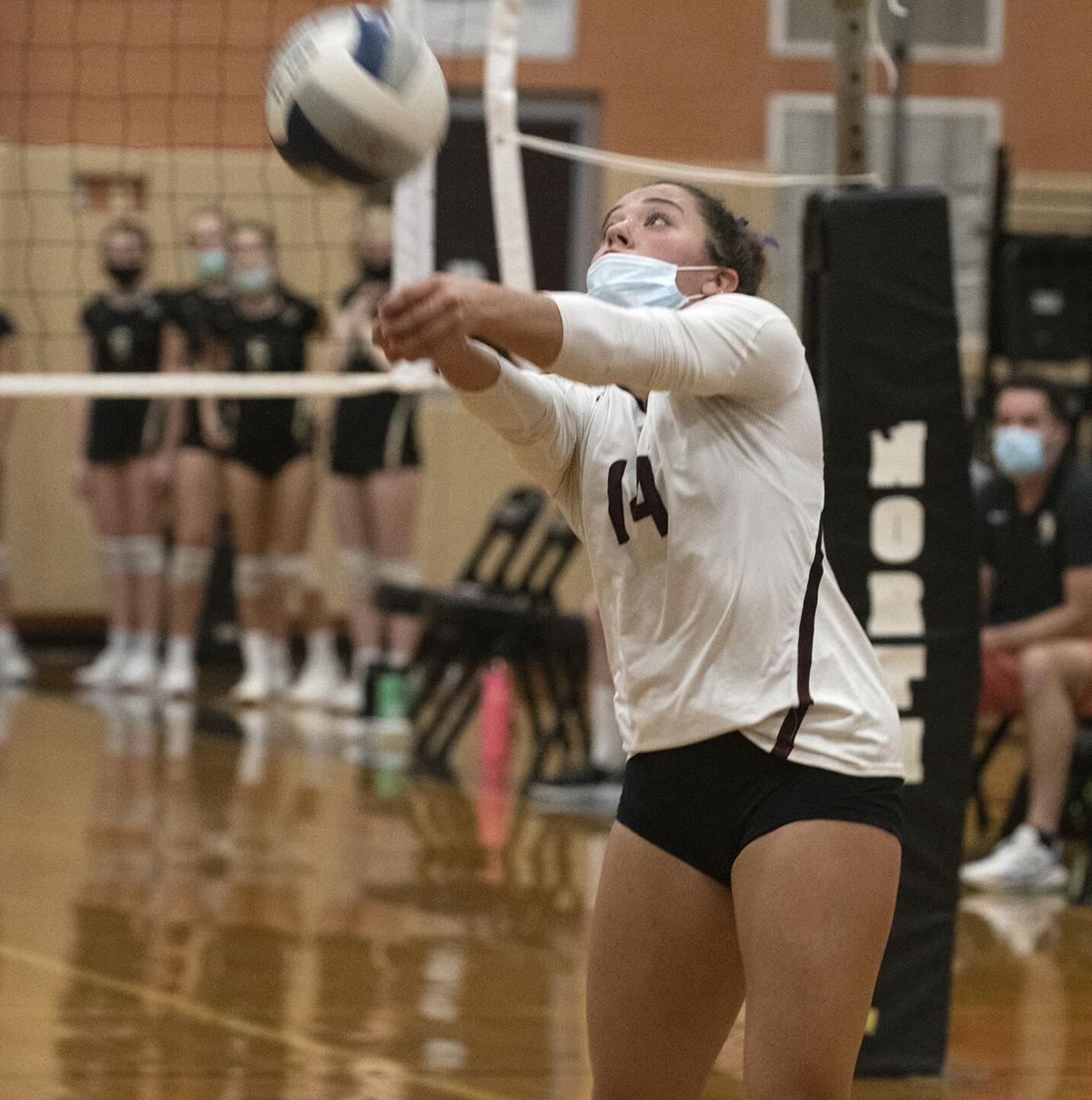 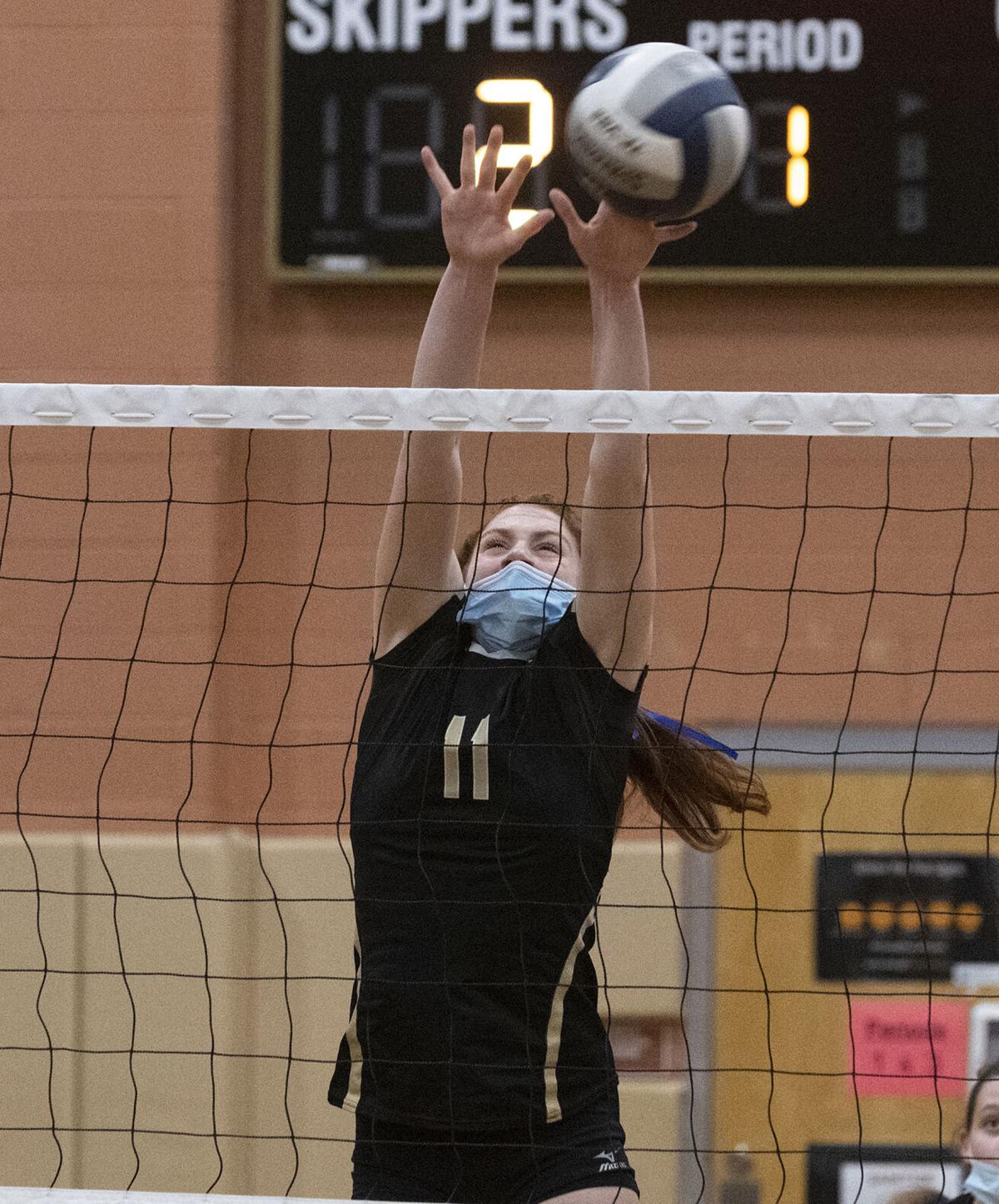 NORTH KINGSTOWN — Keeping up with the North Kingstown High School girls volleyball team is getting more difficult by the day.

A month after getting pushed to the brink by Prout in the season opener, the young Skippers showcased their improvements on Tuesday night, sucking the drama out of the rematch in a 25-21, 25-20, 25-11 sweep of the Crusaders.

“We just wanted to play better than we did last time,” sophomore setter Ella Maack said. “We wanted to use what we learned and just improve our game.”

Plenty of chances remain for the opposition, but it may turn out that Prout’s opportunity in the opener was the best anyone was going to get. That first match had all the makings of an ambush – the Skippers returned only two starters from last season, their Injury Fund tuneup had been canceled, the crowd at Prout was raucous and the Crusaders were flying high. With that extra degree of difficulty now lessened, the four-time reigning champions have stayed the course and taken big strides since then, all while keeping their unbeaten streak intact.

“First time we played, it was the first time we saw another team,” Garrepy said. “We didn’t get a chance to scrimmage. That gym is really tight. I think you put a lot of players who hadn’t played at 6:30 into a tightly packed gym on a hot night with a raucous crowd, you’re going to get some things that don’t look as rhythmic as they might in the middle of October.”

The Crusaders entered the rematch riding a streak of seven consecutive wins, their own improvements also ready to be put on display. But a tough serving night and an attack that seemed a little off made it an uphill battle. North Kingstown’s development did the rest.

“I thought we struggled serving tonight. That’s not like us,” Prout coach Andrew Bevilacqua said. “If we do miss serves, we usually tend to balance it out with aces. Someone like NK, with great serve-receive, you just can’t miss serves like that. And our serve receive was not very good. A lot of over passes where we were just setting them up to pound the ball back at us. That’s not the way we’ve been playing the last couple of weeks.”

Prout led on several occasions in the first set, including at 20-19. The Skippers came back from there to win six of the next seven points for the 25-21 victory. A kill by Cassidy Cole started the run, and a block by Abby Ryno kept it going. After a hitting error on Prout, the Skippers got a kill from Jillian Rogers for a 23-20 lead. A setting error made it 24-20. Prout stayed alive on a kill by Ava Grace Dresback before Morgan Cheney sealed the win for the Skippers with a block.

The opening set performance affirmed to the Skippers that they’ve become a different team over the last month.

“From being in practice and learning what each of us can do, relying on each other more, we just use that to come out and just win,” Maack said.

It was a similar story in the second set except that North Kingstown’s run came a little earlier. Prout was up 14-11 when the Skippers won six straight points to grab the lead. Maack served up a pair of aces and Rogers had a kill to power the burst. The Skippers stayed in front from there, closing out the 25-19 win with a Ryno kill.

The third set was all North Kingstown. Leading 4-3, the Skippers reeled off nine points in a row for their longest run of the night, going up 13-3. Rogers had a block and Cole had two kills. Later, Cole had a kill and an ace and Carly Lafferty had a block to power a run of six straight points that made it 22-8. Prout made a brief stand before the Skippers clinched the sweep with a kill by Ryno and an ace by Maack.

“From day one to now, they’ve really improved,” Bevilacqua said of the Skippers. “We’ve improved, but their serve-receive was really solid tonight and defensively, we pounded a few balls and they’re sprawling out, making digs, keeping balls alive. Huge improvement on that side, which we knew was going to happen.”

Cole led the Skipper attack with 12 kills, and Ryno added eight. Players like Rogers, Lafferty and Cheney who were getting their first taste of varsity action in the season opener chipped in key points. Libero London Kearney also played well.

Where the Skippers might have been a little thrown off by the crowd in the first meeting with Prout, they thrived on a similar atmosphere Tuesday.

“This is as good a crowd as we’ve had for a regular season match in our seven years here. For a Tuesday night in October, I couldn’t ask for a better environment. What a fun atmosphere for the kids and the coaching staff,” Garrepy said. “I was really excited to see the emotions going back and forth between the players and the fans and hopeful that our kids could handle the pendulum swinging with that emotion. Early on, I thought we struggled with that a little bit and then kind of sorted it out. We made some key plays in some key moments. London had a few key digs that really helped us. Maybe that first match out, she doesn’t make those plays.”

Prout will try to regroup as it heads into the second half of the season and will eye another shot at North Kingstown.

“Hopefully we see them again in the playoffs,” Bevilacqua said.

The Skippers will try to keep getting better.

“I think if we watch some of that film and look at where we were in August to now, and understanding we have a lot of inexperience, they’re doing a lot of little things better,” Garrepy said. “As coaches, we’re the hardest critics on them in a positive way because we always feel like there’s more. That’s the desire going forward, to keep progressing.”