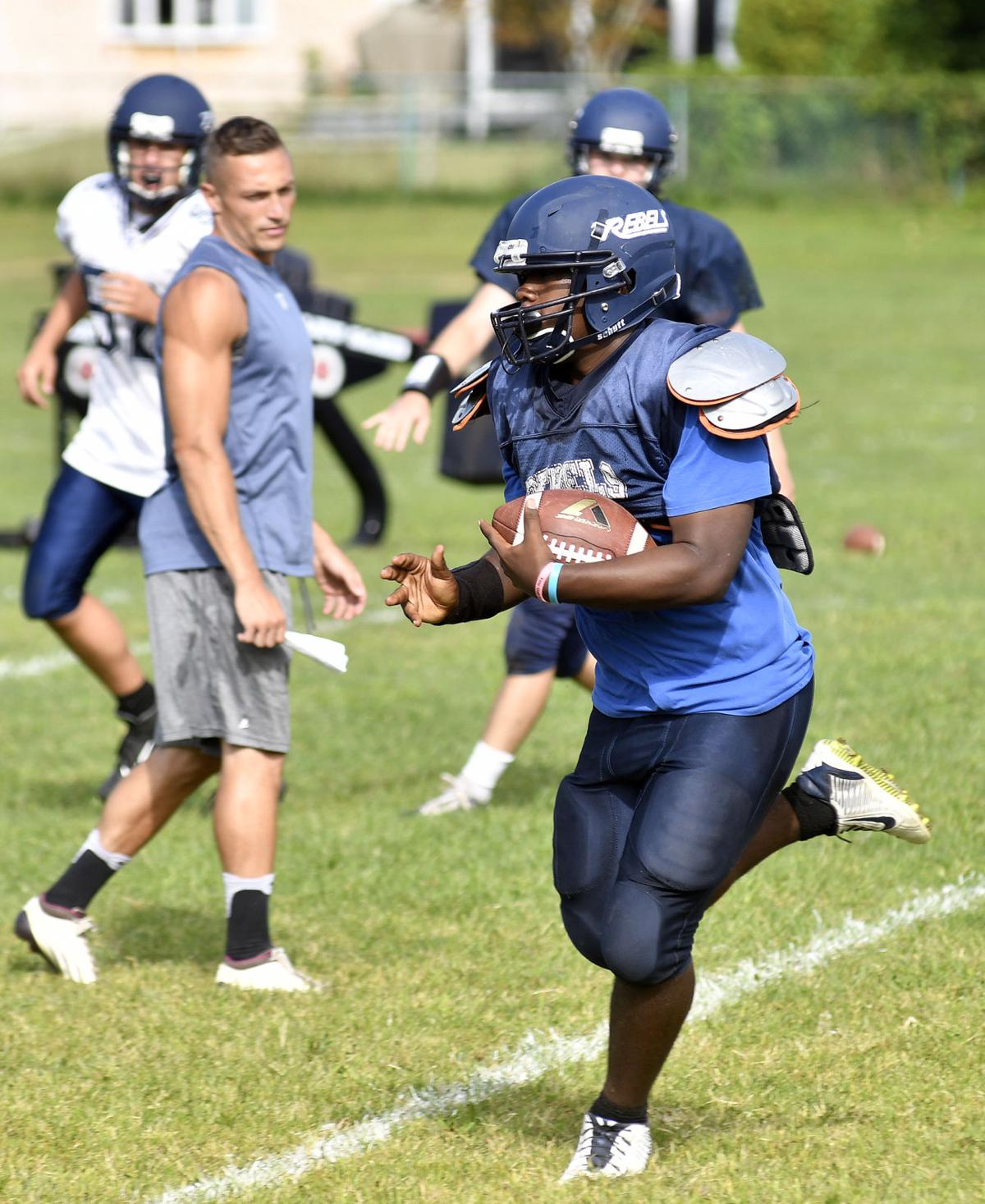 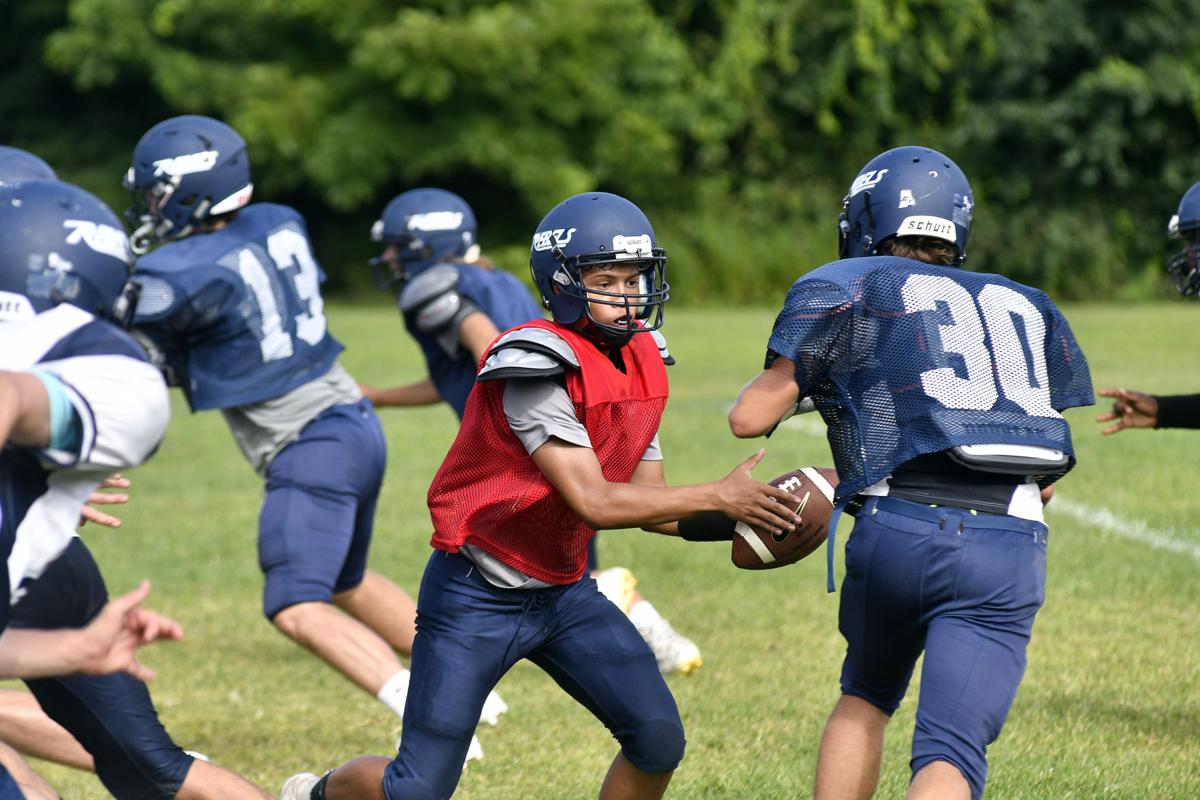 South Kingstown's Trey Young works on a hand-off drill during practice on Tuesday at Hazard Field. 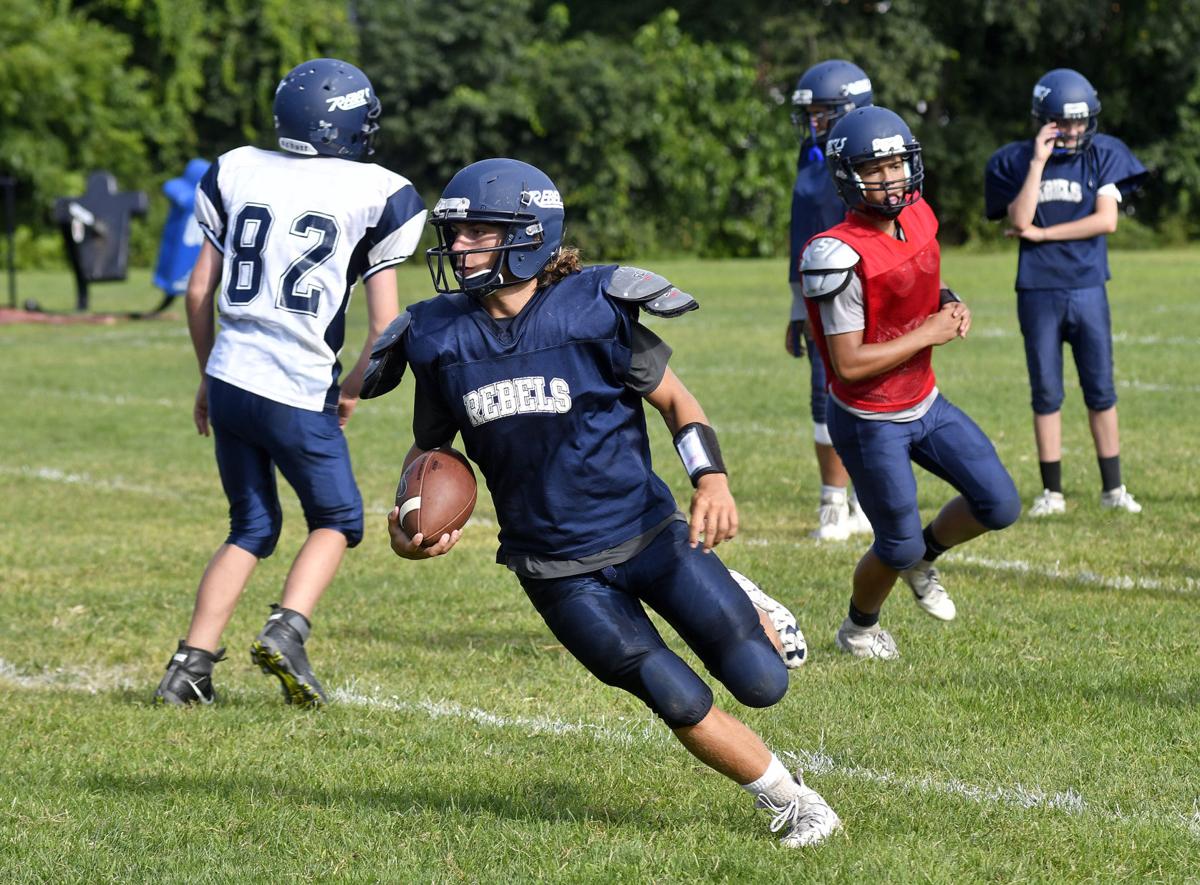 South Kingstown's Trey Young works on a hand-off drill during practice on Tuesday at Hazard Field.

But not too different.

That sentiment could apply to a lot for the Rebels this season.

Zannella is replacing longtime coach Eric Anderson but has experience with the Rebels thanks to his year spent as an assistant coach last season. And while the team lost standout players to graduation, last year’s squad was young in most spots.

“It’s been good,” Zannella said of training camp. “We’re blessed with a lot of guys who have come back with varsity experience. God knows the seniors that graduated last year, they’re sorely missed, but we did have a lot of underclassmen who saw varsity time last year. Even though some of our offensive and defensive philosophies have changed a little bit, those guys understand what it takes to be a varsity player. They’ve been great role models for the younger guys. They know what it’s going to take to be ready for Division I play.”

Zannella is a former head coach at Coventry and Cumberland. After leaving Coventry, he joined the Rebels staff last season. When Anderson stepped down, it was a natural fit for Zannella to take over. Longtime assistant Tucker Brierty has remained on staff. Former Cranston West head coach Steve Stoehr is also on board, along with former Coventry assistant Andy Bean.

Zannella and company inherit a team that has largely held its own in the state’s top division since moving up from Division II in 2010. The Rebels qualified for the old four-team playoff bracket twice and have been every year since the postseason expanded to eight teams. Last year, South Kingstown went 2-5 with several close losses but still found its way into the playoffs thanks to a late-season win over Portsmouth. They bowed out to North Kingstown in the opening round.

While there aren’t a lot of shoes to fill from last year, there are some big ones. Linemen Montaner Fresilli and Robbie Marshall were tone-setters and anchors in the running game. Quarterback Brycen Maloney, running back Denzel Perry, linebacker Colin Egan and tight end Max Brzoza were also key players.

“The seniors we’ve asked to get things done, they’ve stepped up. They’ve worked hard over the course of the summer and their off-season conditioning. It’s translating into good things here,” Zannella said. “We do wish we had a few more numbers. We’ve got sophomores who are going to be thrown in and we’re asking them to perform. But we’re trying to put them into situations in practice where they are tested. So they’re not surprised the first time they see an opposite color jersey coming at them full speed.”

Junior Trey Young is the frontrunner to start at quarterback. He filled in late last season when Maloney was injured, and the offense is now being tailored to suit him.

“It was hard for the last two games to develop something that would work to Trey’s strengths,” Zannella said. “That’s what we’ve been working on. There are core things we need to do, but also, what are we going to do to make sure the quarterback is a weapon? Trey’s still young, but I’m very happy with what I see.”

Sprague rushed for nearly 200 yards in the playoff-clinching win late last year and returns to the backfield. Rory Hazard, who rushed for 159 yards the week before and had several other big games, is also back. Ryan Hazard, Colin McNamara, Cade Birrell and Isaiah Carter are among the young players providing depth.

With a good front line led by Schold and junior Nolan Parchesky, the Rebels’ running attack should roll on. It will look similar, if not identical.

“There’s a lot of carryover,” Zannella said. “But I think we’ve expanded. There are certain elements within the Wing-T that you have to run. And then you’ve got to come up with some other things. That’s what we’re doing. We’re trying to be eclectic.”

The defense will feature a lot of the same players, with most of the Rebels set to play on both sides of the ball. Parchesky and Ryan Hazard will anchor the defensive line. Sprague will lead the linebacking corps, along with Schold, Nate Ambrad and Tyler Pearce. Birrell, McNamara and Chris Nhem saw a lot of time in the secondary last season.

At every spot, Zannella has been impressed by the Rebels’ ability to learn.

“The kids are great because they’re so smart,” he said. “You don’t have to tell them 15 times what to do. The stuff we’re asking them to do is pretty complex. Some of the stuff that we’re doing, I’ve wanted to do, but I’ve never had the players who had the ability to absorb it. These kids, we started day one and they thrived in it.”

Challenges await, of course. The Rebels open against Division II power Burrillville before diving into Division I play against La Salle and Cranston West, who should be two of the top teams in the state.

“I’m really happy and really excited about the season,” Zannella said. “I know we’ve got some early games that are monumental tasks, but I think with what we’re teaching them, hopefully it puts them into an advantageous position.”