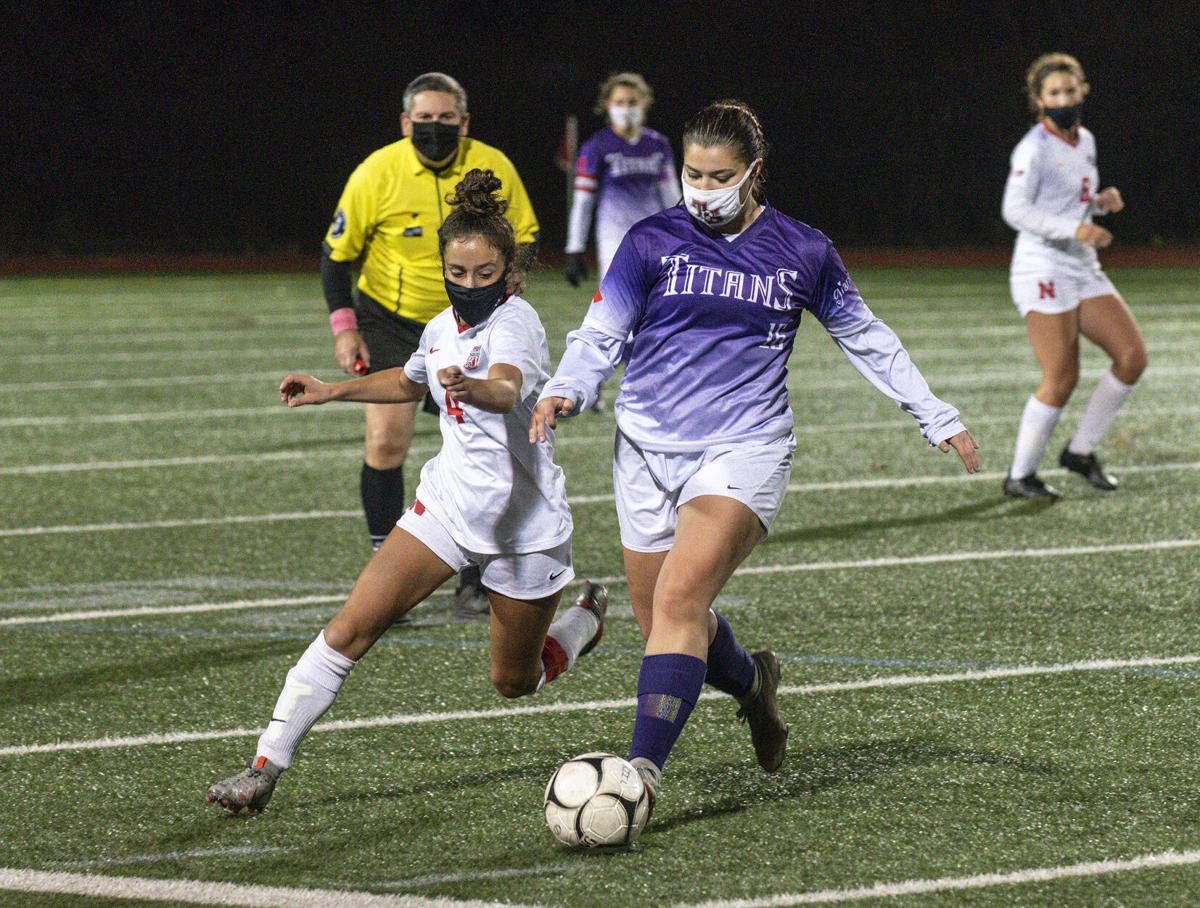 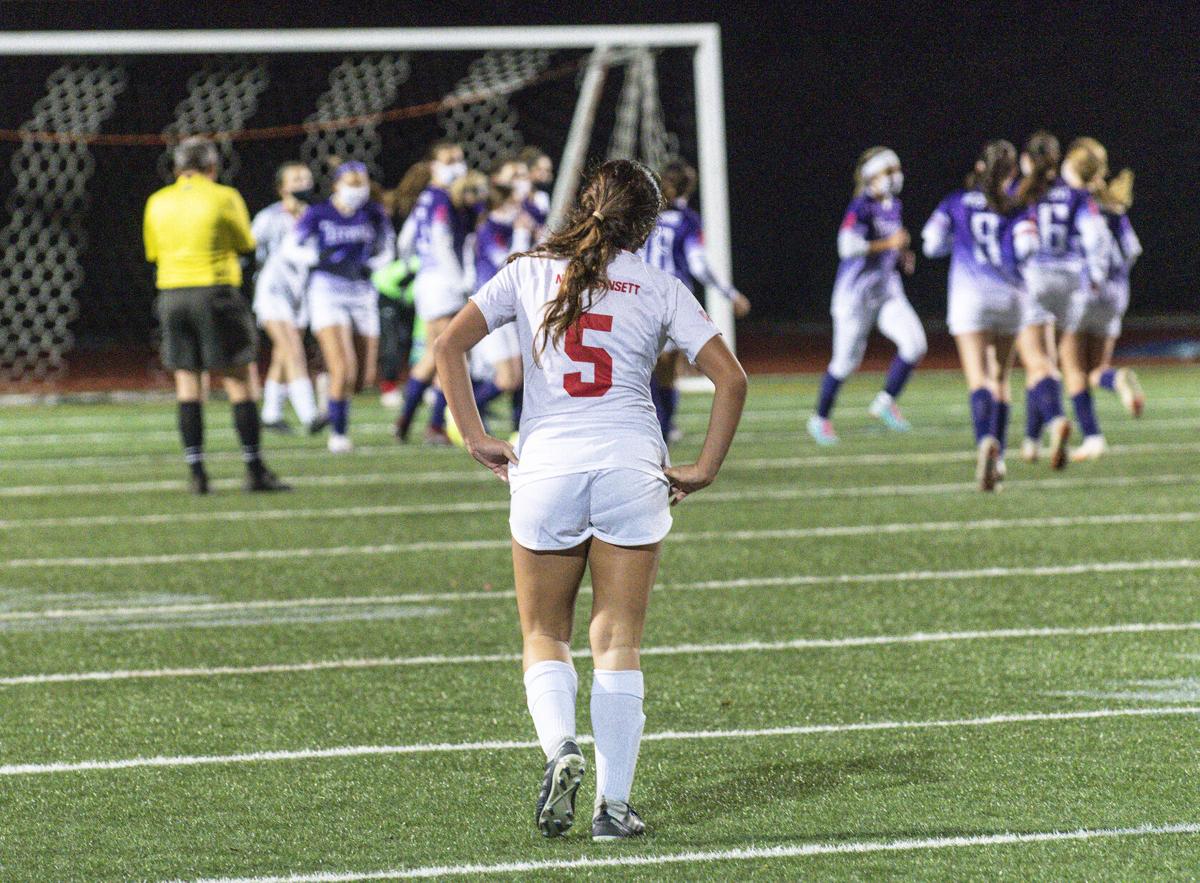 In between was a remarkable ride.

The first loss to the Titans came in the opener of a season filled with uncertainty. The result was evidence that a young Mariner team had a ways to go, especially in a more challenging Division III. It was part of an 0-2 start to league play and an 0-5 start overall.

The second defeat came in the Division III championship game Sunday night at Johnston High School. It was the same score but a very different game, and in a place that was a long way from that 0-5 start.

“It’s really an unbelievable story and you would only know if you were on this team,” Narragansett head coach Kathryn Mahoney said. “At one point this season, we were just looking for a win. We’ve been here before with teams you knew at the beginning of the season, this could be the year. This year, it was, ‘Let’s see if we can get a couple of wins.’ This team consists of three seniors and three juniors and the rest are underclassmen. It’s a testament to their efforts. Most teams, when you lose so many times early, they give up. Not only did we not give up, we persevered to the finals.”

That perspective remained even after the final whistle. With a chance at a title, the Mariners certainly wanted to win, but the journey to the opportunity was at the forefront of everyone’s mind.

“Nobody would have thought we would make it here,” senior captain Rylie Mitchell said. “The past few years have been growing years. Two years ago, we lost half of our team. This year and last year, it’s been four or five upperclassmen and then a lot of underclassmen. They really stepped up.”

It was a sudden rise after the tough start. The Mariners didn’t earn their first win until Nov. 7. They lost their next game before winning two straight to close out the season, which allowed them to snag a playoff berth.

“We started the season off a little rough, but we were playing above our level, and I think that made us stronger,” Mitchell said.

Seeded third in D-III-South, the Mariners edged North No. 2 seed St. Raphael 2-1 in the quarterfinals, then were the beneficiaries of a stroke of bad luck for a title contender. Two-time reigning champion Tiverton was forced to start quarantine just before the playoffs and forfeited its quarterfinal matchup to Woonsocket. Narragansett handled the Villa Novans 3-1 in the semifinals to earn the title berth, their second in the last three years.

While they looked a step behind Toll Gate in the season opener, they were fully up to speed this time. The first half was scoreless, with the teams each generating quality opportunities. Narragansett had its best chances in a flurry over the final seven minutes of the first half. Anna Hart played Sara Sylvestre through on the right side for a chip shot over goalie Madison Clark. A Toll Gate defender managed to clear it. The ensuing corner kick set up another look for Sylvestre, who fired a shot just over the cross bar. A minute later, Bridget Blessing put a free kick on net that Clark knocked over the bar.

At the other end, Toll Gate had several breakaway chances but was turned away by goalie Jenna Silvestri.

“We improved significantly,” Mahoney said. “I watched it back because we had it on film. The improvement was remarkable, to see where we were then to where we are now.”

Things shifted early in the second half. Olivia Dutra broke the deadlock less than three minutes in with a free kick from 20 yards out that snuck just inside the near post. Then, in the 56th minute, Cassie Cirella made it a 2-0 lead when she finished a Dutra cross.

The burst put the Titans in control but also seemed to be a spark for the Mariners, who pushed for two corner kicks and two more chances in the next 10 minutes. In the 74th minute, they got on the board with a goal by Mitchell off a scramble by the left post, following a free kick by Blessing. Mitchell, typically the team’s sweeper, was playing up front as the Mariners tried to put the pressure on.

“We don’t let anything bring us down,” Mitchell said. “If anything, it makes us work harder. We kept our heads up, kept encouraging.”

The Mariners had another look soon after the goal, as a pretty cross by Sylvestre was intercepted by Clark just before it got to an open teammate.

With the big push forward continuing, the Mariners ended up chasing on a counter-attack. Cirella scored her second goal of the game on a breakaway to put the finishing touches on the win for the Titans.

“It’s tough. When you get here, you want to win, of course,” Mahoney said. “It’s hard to get here and lose. But I think we did an amazing job of competing. They have nothing to be disappointed about. This is amazing.”

And it may be just the beginning. The title game appearance represented an early arrival for the Mariners and their young nucleus. At one point, this season was shaping up as a chance to gain experience, if nothing else. Instead, it’s experience with quite a bit more.

“I think that they’re going to dominate,” Mitchell said of her younger teammates. “I have so much faith in all of them. They work so hard. They have amazing skills and so much talent. For them to make it this far at this age, they’re going to be unstoppable for the next few years. I can’t wait to see how far they go.”

Do you believe the state has handled the initial roll out of the COVID-19 vaccine in a satisfactory way?

Dr. Nicole Alexander-Scott, director of the Rhode Island Department of Health, cited a short supply of COVID-19 vaccines in the state while arguing that despite those limitations the state is still doing well in doses per capita administered. “Right now, the biggest challenge facing Rhode Island’s vaccine program — like most other states throughout the country — is that we are not receiving a lot of vaccine,” Alexander-Scott stated in her update. Do you believe the state of Rhode Island has, so far, handled the distribution of the COVID-19 vaccine in a satisfactory way? Let us know in this week's poll question below.