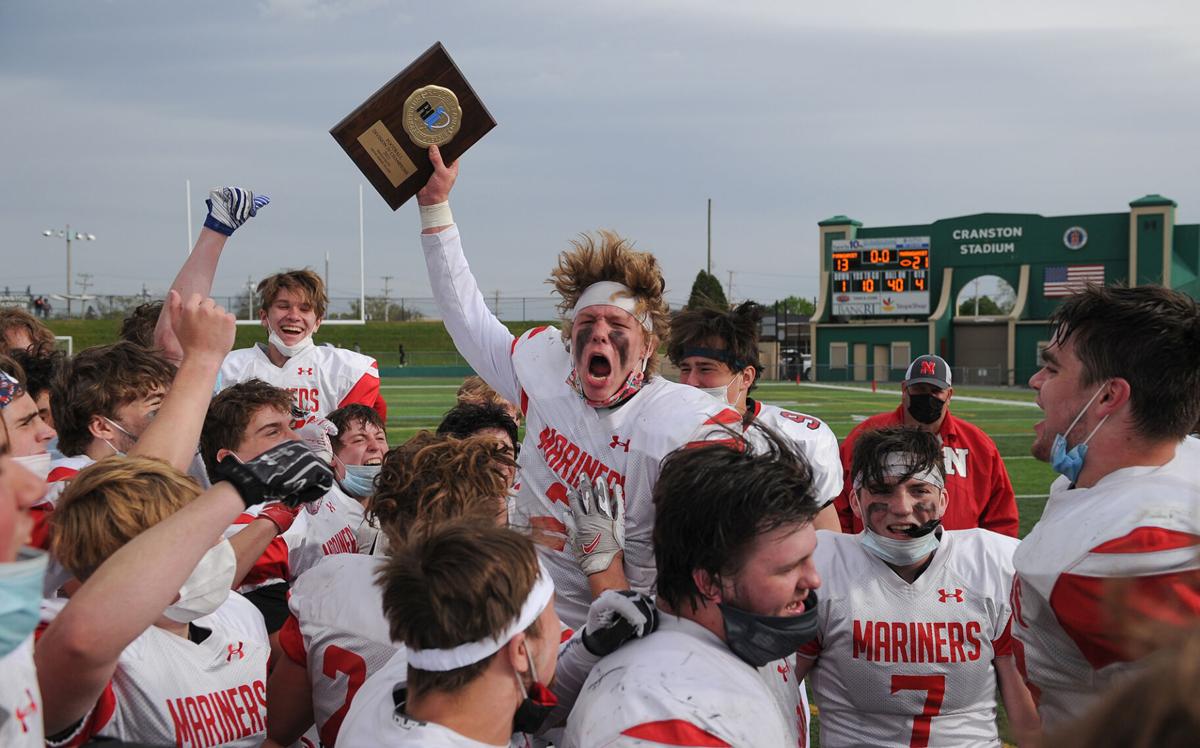 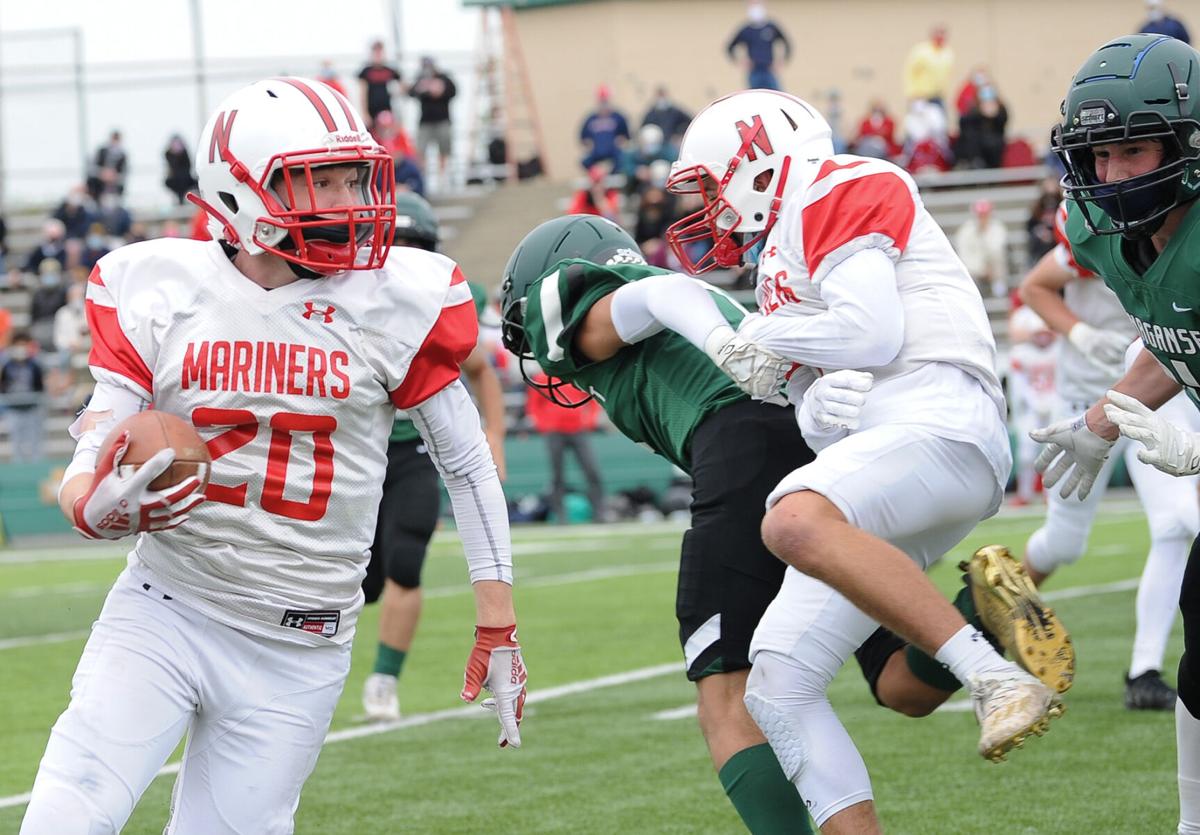 Narragansett senior Brady Butler runs the ball in the first quarter of the Mariner's 21-13 victory over Ponaganset in the RIIL Division IV Super Bowl Sunday afternoon at Cranston Stadium. 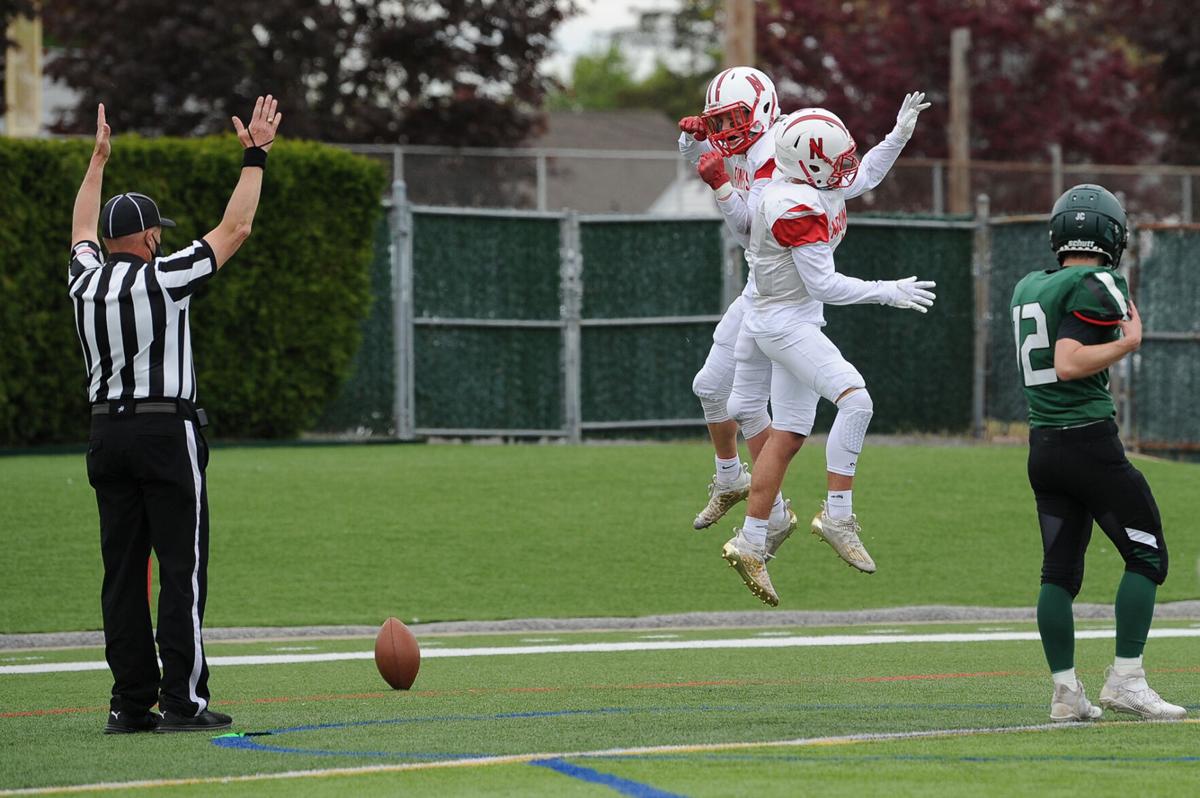 Narragansett’s Tyler Poirier and Peanut Chaloux celebrate after scoring a touchdown in the second quarter of the Mariner's 21-13 victory over Ponaganset in the RIIL Division IV Super Bowl Sunday afternoon at Cranston Stadium. 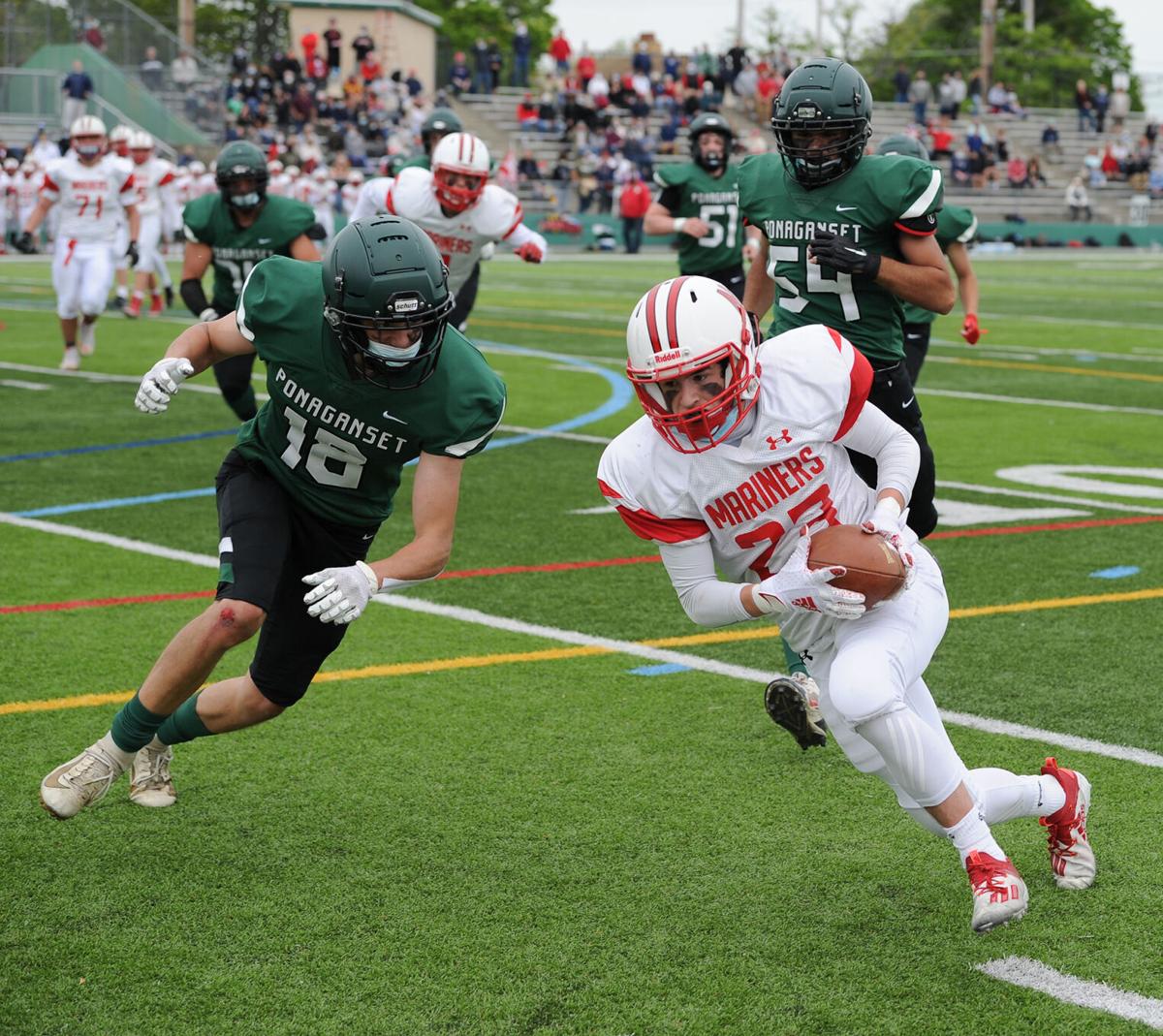 Narragansett junior Zach Bianco, right, outruns a slew of Ponaganset defenders en route to a touchdown in the second quarter of the Mariner's 21-13 victory over the Chieftains in the RIIL Division IV Super Bowl Sunday afternoon at Cranston Stadium. 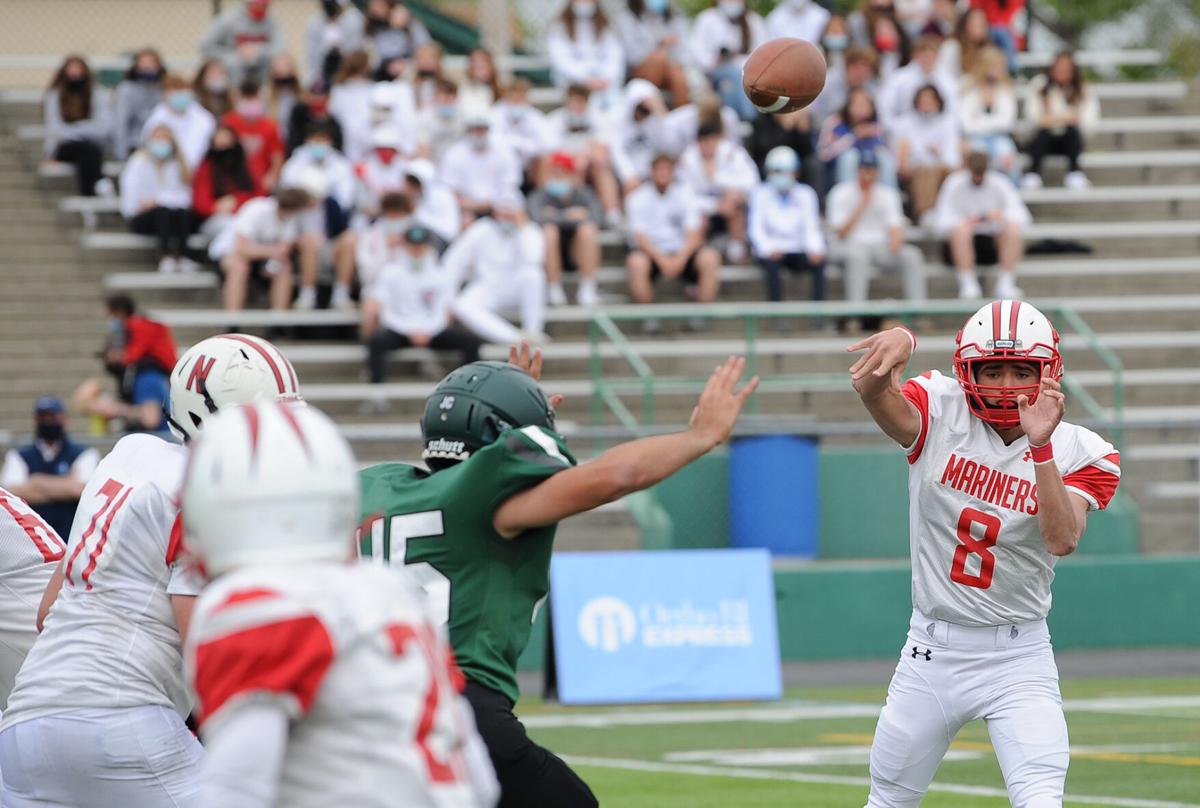 Narragansett junior Phil Theroux throws the ball in the second quarter of the Mariner's 21-13 victory over Ponaganset in the RIIL Division IV Super Bowl Sunday afternoon at Cranston Stadium. 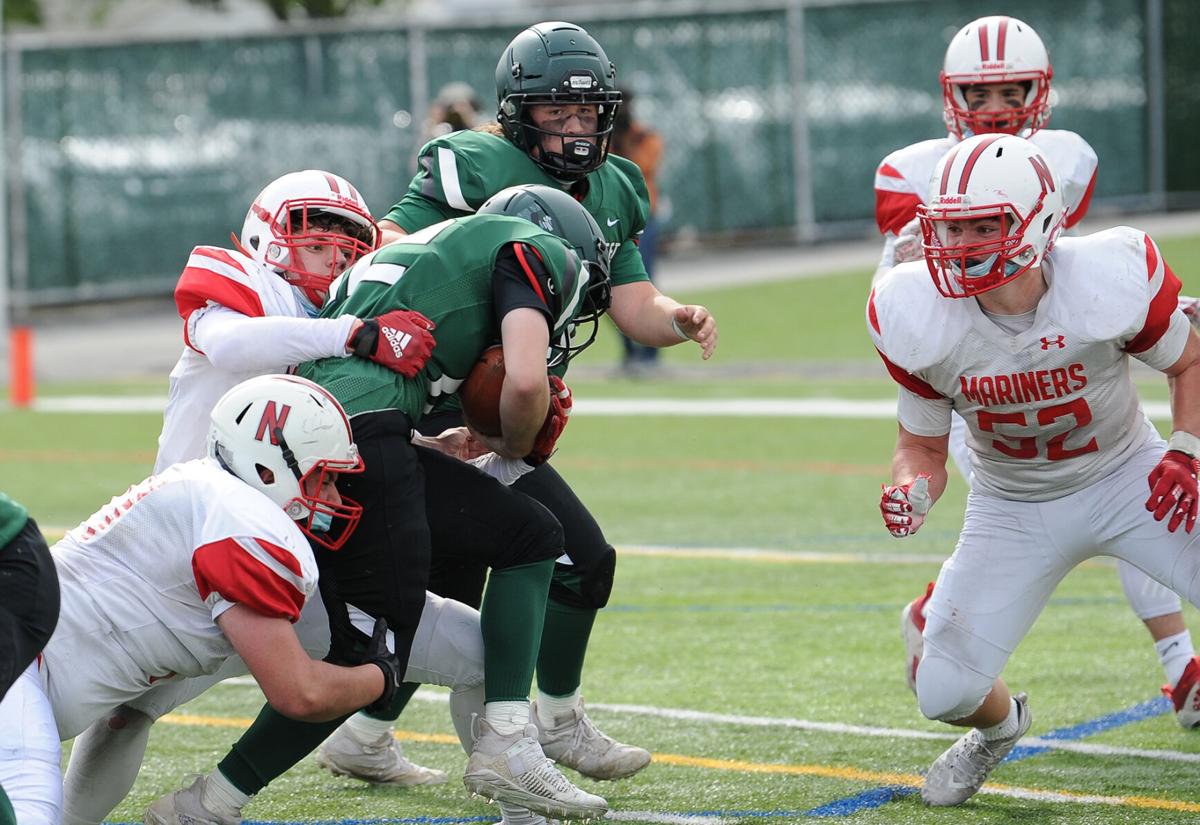 Narragansett defender Colin Flynn, right, and a slew of teammates tackle a Ponagansett running back in the third quarter of the Mariner's 21-13 victory over Ponaganset in the RIIL Division IV Super Bowl Sunday afternoon at Cranston Stadium.

Narragansett senior Brady Butler runs the ball in the first quarter of the Mariner's 21-13 victory over Ponaganset in the RIIL Division IV Super Bowl Sunday afternoon at Cranston Stadium.

Narragansett’s Tyler Poirier and Peanut Chaloux celebrate after scoring a touchdown in the second quarter of the Mariner's 21-13 victory over Ponaganset in the RIIL Division IV Super Bowl Sunday afternoon at Cranston Stadium.

Narragansett junior Zach Bianco, right, outruns a slew of Ponaganset defenders en route to a touchdown in the second quarter of the Mariner's 21-13 victory over the Chieftains in the RIIL Division IV Super Bowl Sunday afternoon at Cranston Stadium.

Narragansett junior Phil Theroux throws the ball in the second quarter of the Mariner's 21-13 victory over Ponaganset in the RIIL Division IV Super Bowl Sunday afternoon at Cranston Stadium.

Narragansett defender Colin Flynn, right, and a slew of teammates tackle a Ponagansett running back in the third quarter of the Mariner's 21-13 victory over Ponaganset in the RIIL Division IV Super Bowl Sunday afternoon at Cranston Stadium.

CRANSTON — The pomp and circumstance of football tradition had been replaced by a quiet scene. Weather pushed the game two days back from Thanksgiving. The field was muddy, the sky gray. It was the end of a disappointing 2018 season, and less than two dozen players were in uniform for the Narragansett High School football team.

A rebuild that had gone surprisingly well the year before had hit bottom.

“Two years back, I just remember the look on their faces when we had 17 kids on the sideline to finish up the season,” head coach Matt Blessing said. “But they fought and they battled. The next summer, we got into a passing league and it really clicked. We had success out of the gate last year and built some excitement around the program. That gave us a huge boost. To see them turn this corner is pretty special.”

The Mariners won the game that day despite being shorthanded. It was the first step on a path forward, one that took them to off-season success, growing numbers and a playoff berth in 2019. The trajectory remained the same this season.

Sunday, they reached the top.

The Mariners beat Ponaganset 21-13 in the Division IV Super Bowl at Cranston Stadium to capture the school’s first championship since 2003.

“It just feels great,” junior Tyler Poirier said. “All the work we put in, everything we did since the start of the season – this was our goal. This is what we worked for. Having this feeling is amazing.”

It’s the sixth championship in school history and a new cornerstone for a proud program. There were good years amid the 18-year title drought but some tough ones, too. When Blessing took over in 2017, the Mariners were a playoff team. Then came the brutal 2018 season. They got out from under it thanks to better numbers, an influx of athleticism and an attitude adjustment. With a move to D-IV and an embrace of a “We not me,” mindset in this spring season, the Mariners recaptured the program’s glory.

“We weren’t championship ready week one. We did a lot of good things. But it just comes from the hard work in practice,” junior captain Colin Flynn said. “The big difference for a team winning a championship is getting better throughout the season and working hard and not stopping. We didn’t stop. Even though it was hard and we’re in a pandemic, it doesn’t matter. We worked hard and I’m proud of that.”

The final step was not easy. Perfect in the regular season, the Mariners matched up with a Ponaganset team that also entered with an unblemished record. The Chieftains took an early lead and dominated time of possession in the first quarter as they tried to make it their kind of game. Instead, the Mariners suddenly made it theirs, using lightning strike plays to get the lead. Brady Butler returned the opening kickoff of the second half for a touchdown, and the defense delivered a shutout after halftime to secure the top prize.

“Just like the semifinals, the other team scored first,” Poirier said. “But we’re good at playing through adversity. We just did what we needed to do.”

Ponaganset took a 7-0 lead with 5:17 left in the first quarter on a Nick Baccala touchdown. Narragansett had run only three offensive plays after getting pinned deep in its own end by a great punt. The team’s second drive ended in a turnover on downs and it looked like the third might meet a similar fate. But on fourth-and-long, Phil Theroux lofted a pass to the end zone and Poirier ran under it for a touchdown. Lucas Masson’s PAT tied the game.

After a defensive stop, the Mariners needed just three plays to jump in front. Butler broke a 43-yard run and Zach Bianco hauled in a 16-yard touchdown pass from Theroux.

Ponaganset answered with a score, but Poirier blocked the extra point to keep the Mariners in front 14-13.

The lead grew in a flash.

Butler caught the second-half kickoff at the 21-yard line and took off toward the left sideline. He got the edge, slipped one defender and sprinted the rest of the way to the end zone, picking up speed with every step.

“I saw a hole on the outside, Tyler got me a couple of nice blocks, everybody on the field made nice blocks,” Butler said. “I just had to run and find the hole. It was good momentum for us.”

A soccer and baseball player, Butler had never played football before this season. The move of football to the spring created an opportunity that he jumped at. He finished with 202 all-purpose yards and earned MVP honors.

The defense did the rest. Ponaganset’s backfield was banged up, with standout Marcus Carpenter limited by an injury and playing sparingly on the offensive side. Baccala stepped up to rush for over 100 yards but his longest run went for 12 yards as the Mariner defense limited big plays.

The defense also made some big plays of its own. With Ponaganset threatening to answer Butler’s kickoff return score in the third quarter, Bianco intercepted a fourth-down pass in the end zone.

In the fourth quarter, the Chieftains drove into Narragansett territory, but sophomore Harry Lague forced a fumble on a run by Baccala, and Reider Fry recovered it for the Mariners. They took over with 3:47 left. Butler – of course – picked up a crucial first down, allowing the Mariners to run out the clock on the championship win.

The defense had also logged a second-half shutout in the semifinals.

“Our coaches help us to make really good adjustments and our players have just made plays,” Flynn said. “As the game goes on, we get better.”

There had been a celebration in that 2018 post-Thanksgiving win, but it was small and muted. As the Mariners bounced around with their championship plaque and planted a Narragansett flag at midfield, this party was big and loud.

“This is everything,” Butler said. “The amount of work we put in, practice every single day, to finally get this means so much.”