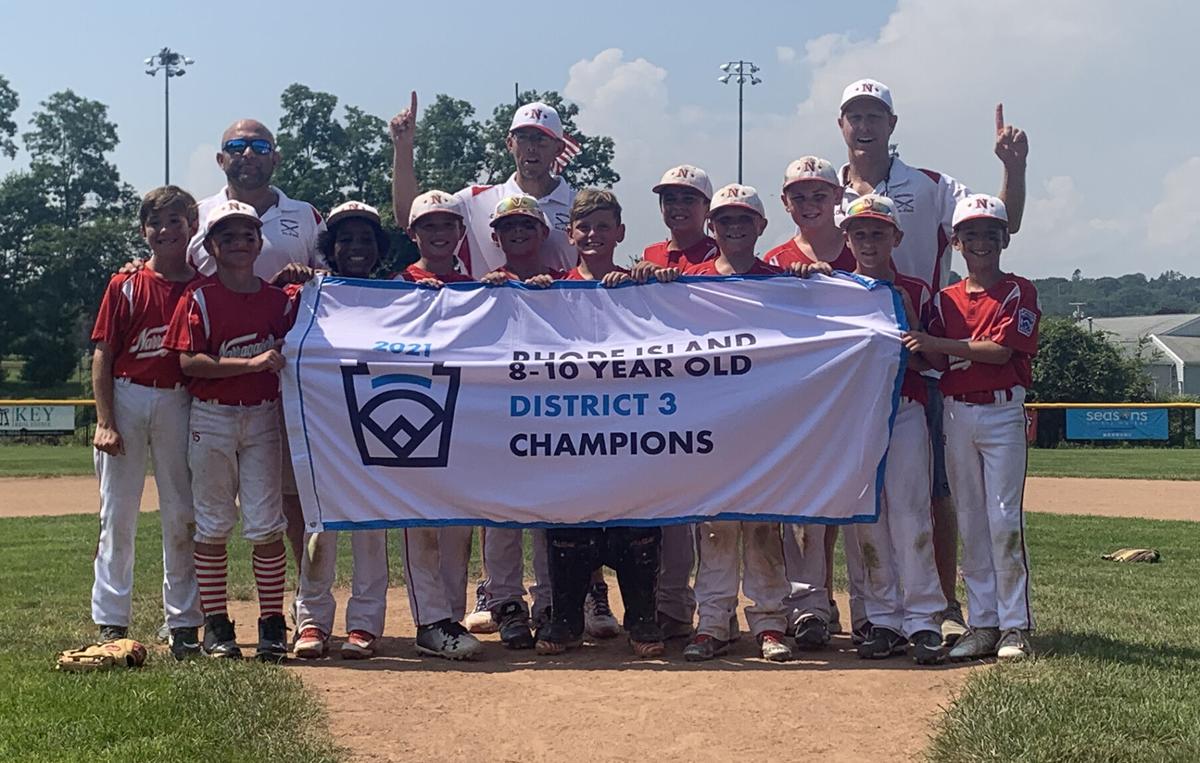 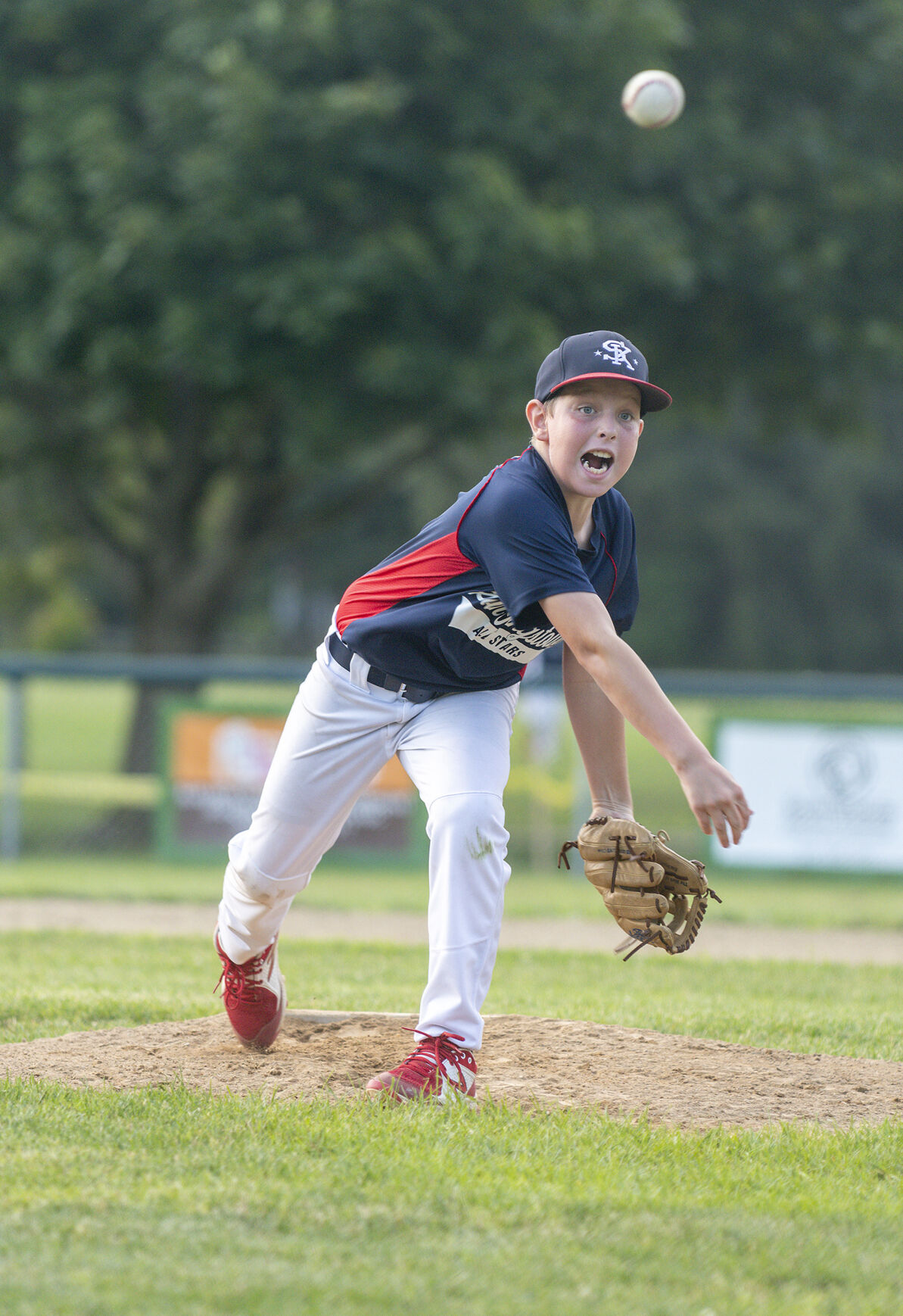 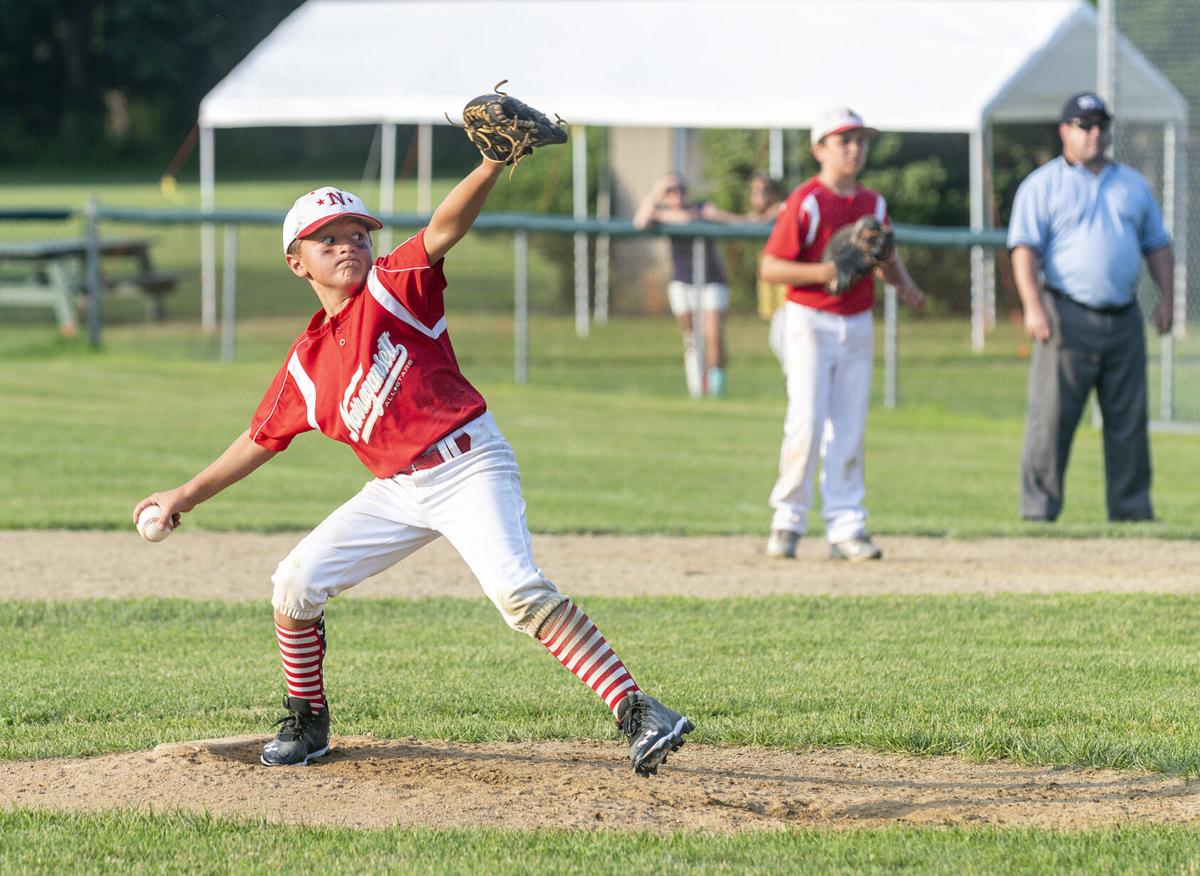 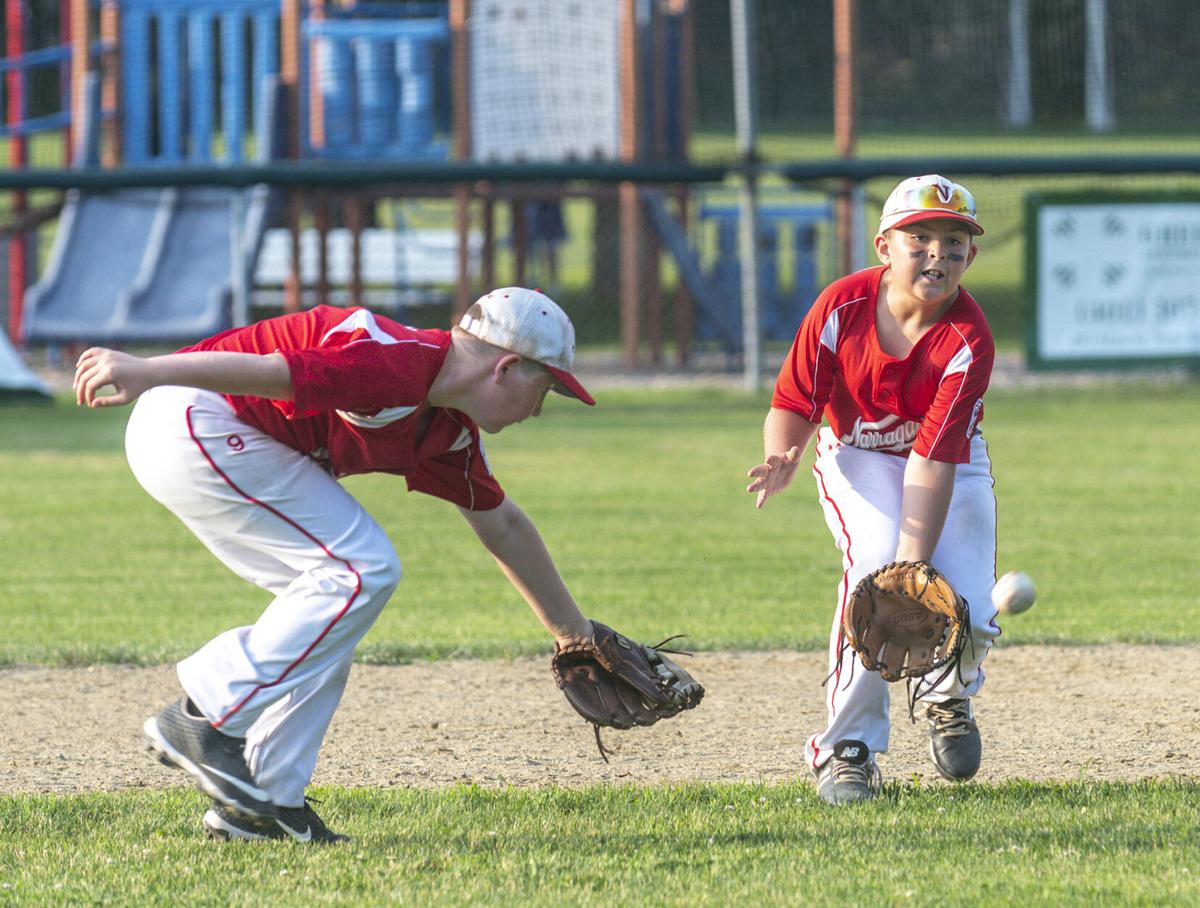 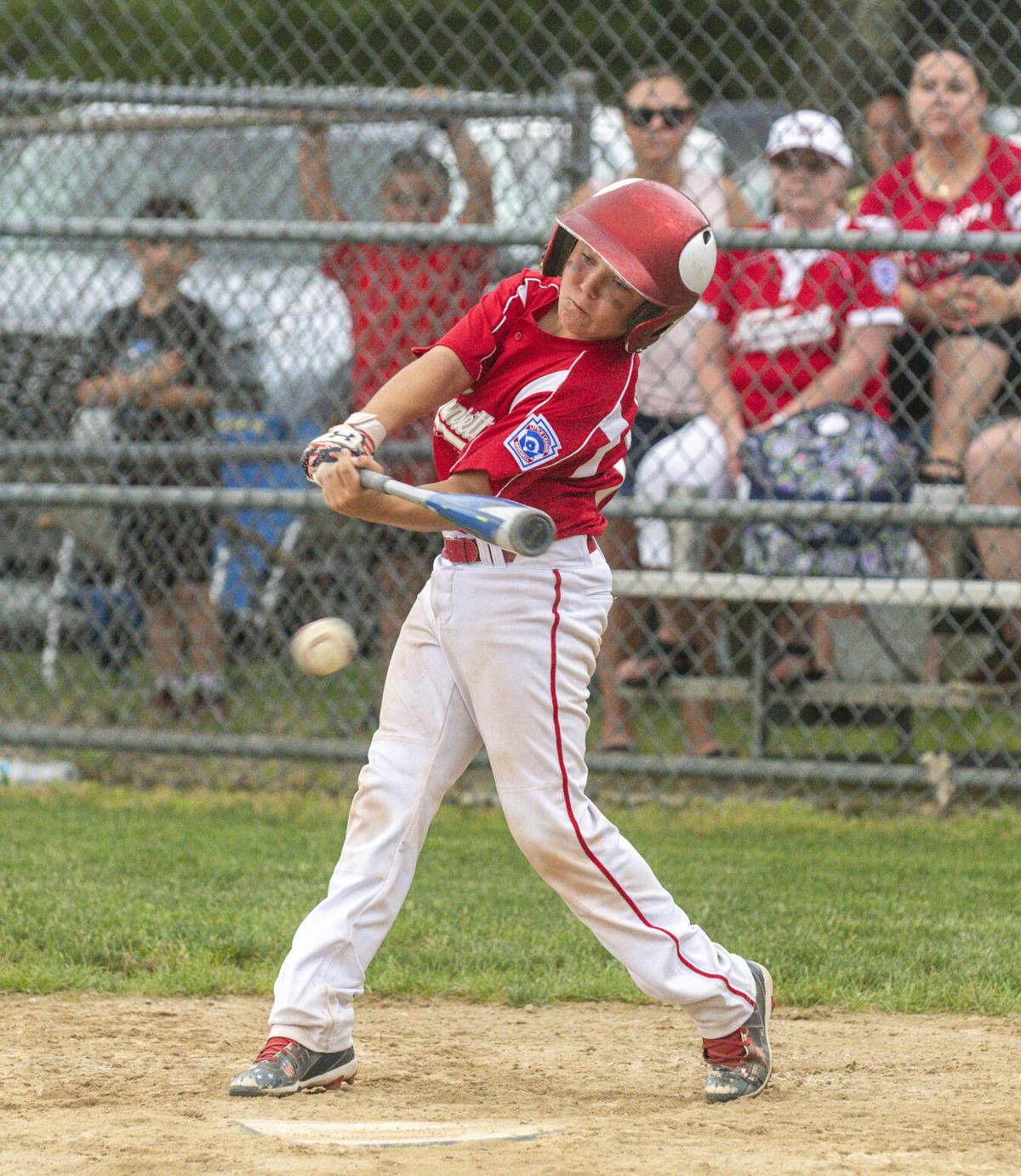 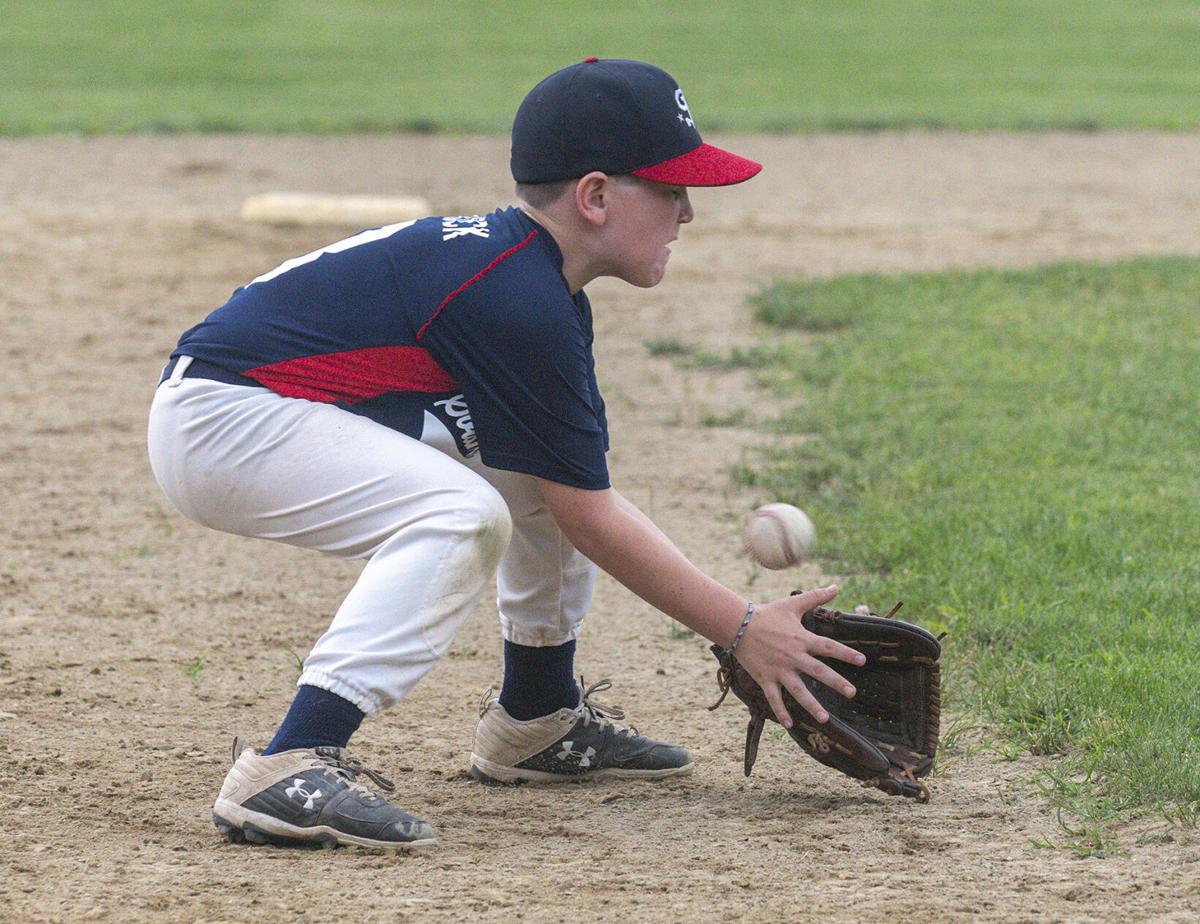 South Kingstown's Leo Brock makes a play at third base during Friday's game against Narragansett at Tuckertown Park.

South Kingstown's Leo Brock makes a play at third base during Friday's game against Narragansett at Tuckertown Park.

A wild game on July 11 ended with a 13-12 win for South Kingstown in the winners bracket final of the District 3 tournament. Undeterred, Narragansett fought back out of the losers bracket for a rematch with South Kingstown, prevailed in another wild game on Friday, then won the district championship with a 7-5 victory on Saturday afternoon at Sprague Field.

“That loss the first time we played them easily could have been it for us,” Narragansett manager Eric Kopf said. “You never know how they’re going to respond to something like that. But the kids came back even more eager at our next practice. Each game, they’ve just been connected. It’s awesome to see.”

The district title is the first for Narragansett Little League since 2010, when it won the 10-year-old crown. The current group has been together for a few years, playing in tournaments for younger age groups. This summer marked their debut in district play, and it was a rousing success. The team will represent District 3 in the state tournament, beginning this weekend.

“It’s inspiring,” Kopf said. “We rolled teams to begin with, then we got into a couple of dogfights. Their character was revealed the last couple of games.”

Narragansett found a formidable rival in South Kingstown. The neighbors see a lot of each other during inter-league play in the regular season. They rose above the rest in the district and essentially played a best-of-three series for the championship, each one completely up for grabs. More matchups in future summers are an exciting prospect.

“The more games they play, it’s going to be fun to watch,” South Kingstown manager Josh Rosen said. “It was good to get a nice group of kids on our end. We haven’t had this in a few years. We’ve been mixing to fill teams with kids from lower divisions. These are all kids who saw each other on the Major League field during the year. They got a chance to be together and they played really well in this tournament.”

South Kingstown won the first meeting in dramatic fashion, rallying from a 12-5 hole in the late innings. With its back against the wall, Narragansett beat Warwick Continental American in the losers bracket final to get another chance on Friday at Tuckertown Park.

The situation got tougher for Narragansett when South Kingstown jumped to a 4-1 lead in the top of the third inning. Narragansett came right back with a two-run rally in the third, highlighted by Max Downey’s RBI double. The fourth inning turned the game completely around as Narragansett sent 12 batters to the plate and racked up nine runs. Luke Taliani led the charge with a two-run double, and Hunter Kopf hit a two-run single.

There would be more scoring on both sides but the big inning held up as Narragansett won 14-9 to set up the winner-take-all title game.

Riding the momentum from Friday, Narragansett raced to a 4-0 lead in the top of the first inning on Saturday. The team opened with four consecutive singles from Fede Giramma, Edward Audet, Taliani and Downey. Rory Plaziak and Liam Boyd each knocked in a run.

True to form for the series, there was a long way to go.

South Kingstown pitcher Cole Rosen settled in and his team scored three runs in the second and two in the third to grab a 5-4 lead. Mason O’Hagan had two doubles and an RBI, while Eli Totten, Jayden Martin, Cash Gurnon and Leo Brock drove in one run apiece. The defense also shined. Totten made several highlight-reel plays at third base and Johnny D’Agostino started a quick-thinking double play after he couldn’t corral a hard line drive.

“They stepped up big,” Rosen said. “Yesterday, they were disappointed. Two innings in the middle of the game, things didn’t go our way. It was a short recovery but one of their goals when we asked them what we’re working on today was the defense. We’re not going to be perfect. No team is in baseball. It was all about can we get a second play, a third play. And we made some big plays.”

But Narragansett made the biggest.

South Kingstown was threatening to add to its lead in the fourth, with runners on second and third. On a shallow pop to right field that looked like trouble, Giramma raced in at full speed and made a shoestring catch to end the threat.

Then Giramma started the top of the fifth with a triple, and Narragansett was back.

“Unbelievable catch,” Kopf said. “Second and third, you don’t know when that inning is going to end. And then he comes up and hits one over the center fielder’s head. He had an unbelievable game. We just moved him into the leadoff spot and he’s been a real spark plug for us.’

After a solid outing, Downey hit his pitch limit for Narragansett in the fifth. Taliani took over and Totten welcomed him with a double, but Taliani stranded him there with a strikeout and a fly-out.

Rosen retired two straight to start the sixth before hitting the pitch count mark. Declan Bellows kept the inning alive with an infield hit, then Chase Moniz cranked a double to deep left field, scoring Bellows with the go-ahead run.

“Chase hit in the middle of our order the first few games,” Kopf said. “We pushed him down into the nine spot a few games ago, and he’s just been crushing the ball. We don’t want him to move around in the order, so we’re keeping him there. He happened to come up in the right spot. Not many teams have a nine hitter as good as him.”

Giramma added an RBI single for an insurance run.

It was fair to wonder if there would be one last rally in the wild stretch of games, but Taliani didn’t let it happen, getting a ground ball for the first out in the bottom of the sixth, then striking out the next two batters to end the game and give Narragansett the championship.

“Our pitchers were outstanding,” Kopf said. “They pounded the zone and gave us a chance. And our gloves were great.”

The loss ends a memorable run for South Kingstown, with more to come.

“We take away a lot for the mental game,” Rosen said. “The boys kind of grew into that over the course of the tournament. Playing in these types of games, good competition, a little bit of pressure – to consistently go out and play and battle, that’s tremendous for these boys.”

Narragansett was off to Pancho O’Malley’s for a postgame celebration on Saturday.

Then it’ll be time for more baseball. Narragansett faces Smithfield on Saturday in the state tournament at Rumford Little League.

“This is a great group of kids,” Kopf said. “They’ve been together for a long time. It’s pretty special.”