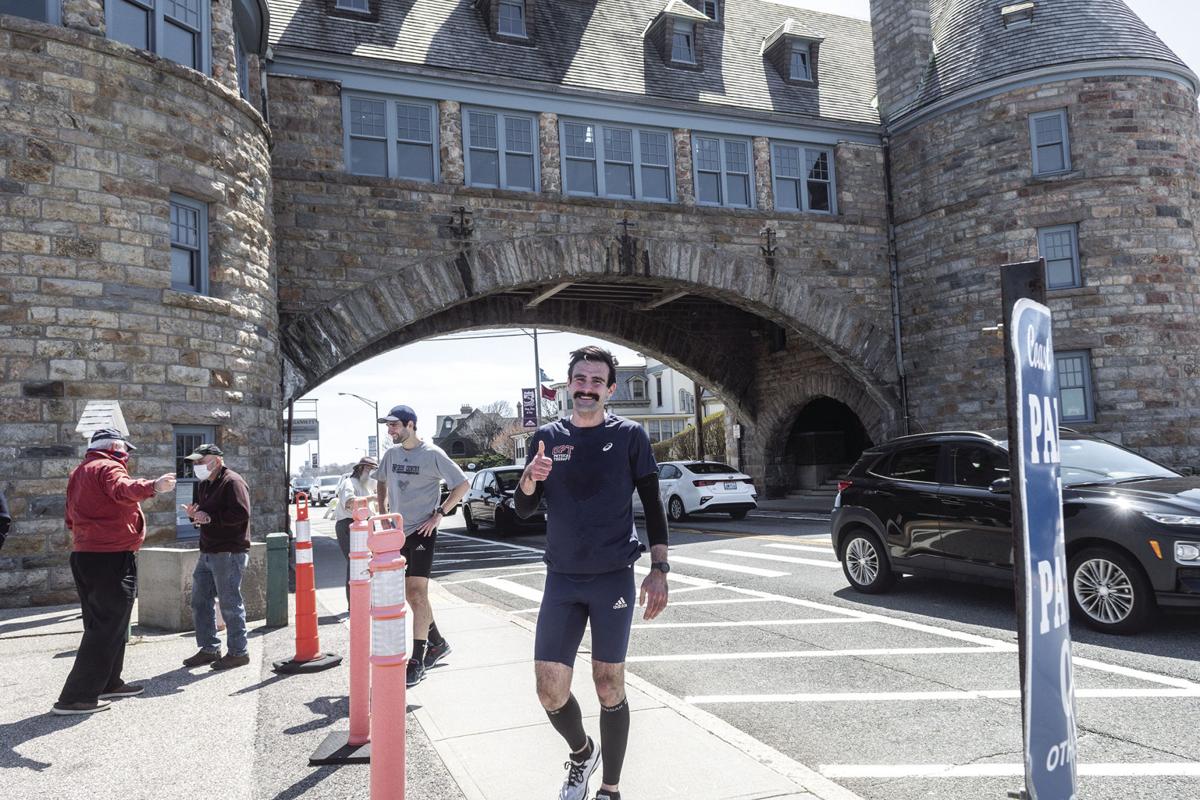 Ken Vinacco, a physical therapy doctoral student at the University of Rhode Island, gives a thumbs up after arriving at The Towers in Narragansett on April 25, which served as the finish line for his two-day run across the state. 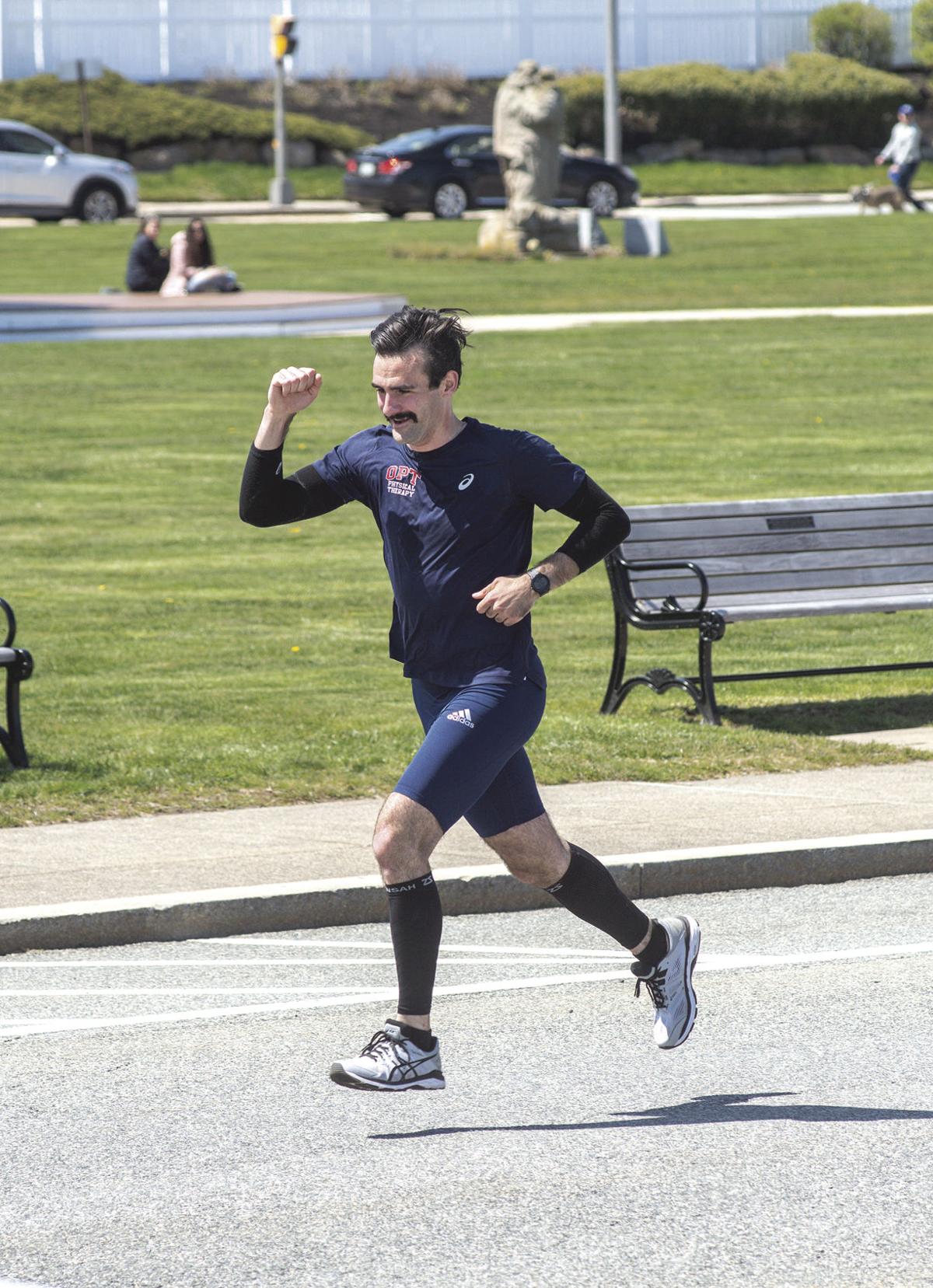 Ken Vinacco, a physical therapy doctoral student at the University of Rhode Island, approaches The Towers in Narragansett on April 25, which served as the finish line for his two-day run across the state.

Ken Vinacco, a physical therapy doctoral student at the University of Rhode Island, gives a thumbs up after arriving at The Towers in Narragansett on April 25, which served as the finish line for his two-day run across the state.

Ken Vinacco, a physical therapy doctoral student at the University of Rhode Island, approaches The Towers in Narragansett on April 25, which served as the finish line for his two-day run across the state.

Ken Vinacco didn’t want his training to be for nothing, especially when there was an opportunity to lend a helping hand.

That’s how Vinacco found himself running to his own personal finish line at the Towers in Narragansett, 56.5 miles behind him.

The University of Rhode Island graduate student was scheduled to run the Boston Marathon in April. When the race was postponed due to the coronavirus pandemic, Vinacco took to the streets of the Ocean State for a marathon and then some on April 24 and 25, running from the northern border of Rhode Island in North Smithfield to the shores of Narragansett and using the journey to raise more than $6,000 for the Rhode Island Community Food Bank and the MS Dream Center.

“I was super excited for the outcome and how much money we were able to raise,” Vinacco said. “Very grateful. We raised over $6,000, which I never thought would be possible. I had a lot of support along the way, too, that I was really thankful for.”

Vinacco is no stranger to long runs. A standout cross country and track runner at Scituate High School, he went on to an all-conference career at Stonehill College. Now in his second year of URI’s three-year physical therapy graduate program, he has continued running in road races, with two marathons under his belt. Last summer, he finished 38th in the Blessing of the Fleet Road Race in Narragansett. He began training for his first appearance in the Boston Marathon last fall, having qualified at the Newport Rhode Races Marathon.

In training for Boston, he had gone as high as 19 miles on a long run. The postponement was disappointing and he began to dial back his mileage when he decided he didn’t really want to tone it down.

“Beginning of April, I was like, ‘I really don’t want all this training to go to waste,’ and I had seen some other fundraisers with people trying to give back,” Vinacco said. “I thought, what’s big and notable that people will pay attention to and hopefully raise a lot of money? This kind of put that all together – my running ability, the training I had been doing, and I thought it was an event that would be big enough to catch people’s attention.”

A journey from border to shore certainly fit the bill. Vinacco got the word out in media outlets and social media and started a GoFundMe page for donations. He picked the Rhode Island Food Bank due to its increasing needs in the pandemic and the MS Dream Center for personal reasons. His mother has MS and has benefited from the center’s work.

“With my birthday coming up at the end of the month and with the current difficulties that many are facing, I wanted to give back and help the community now more than ever,” Vinacco wrote on the GoFundMe page.

Money rolled in. The goal was $3,000; the total is now $6,015 and donations are still being accepted. Search “Run Rhody” on gofundme.com to find the page.

Buoyed by the support, Vinacco set out on the run April 24. He planned to do two runs of about 14 miles each day but didn’t end up splitting it that way, instead running 28 and 28. They were the longest runs of his life, more than the 26.2 of a marathon and more than he had ever done in marathon training.

“Typically, marathon training, you’ll get up to maybe 20 or 21 for your long run,” Vinacco said. “I’ve run two marathons before, but never this distance.”

The extra mileage wasn’t too much of a problem on the first day. Vinacco wasn’t pushing for a particular time, so he could go at a comfortable pace.

Day two was a little different.

“It was painful. It definitely hurt,” he said. “The first day was fine. I was completely fine. It felt like a regular run for me. But waking up that next morning, I knew it was going to be a tough day for me. I just took it at a relaxed pace and took each mile as it came. As the end grew near, I got more and more excited, and I think adrenaline kicked in over everything else and it got me through.”

He also had help, literally every step of the way. Former Stonehill teammate Joe Santo ran next to him the whole first day, and they were joined by Vinacco’s friend from Scituate, Nick Russo, for about 14 miles. Vinacco’s brother, Matt, who runs at URI, did 24 miles on day two. Two friends from the physical therapy program, Hannah Scanlon and Annalissa Mandile, biked alongside. Bery Reid of Olympic Physical Therapy in Wakefield – one of the sponsors of the run – joined in for a few miles once the journey hit South County.

The final boost was provided by family and friends, who gathered by the Towers for the finish. Narragansett Town Manager James Tierney – a close family friend – helped set up the makeshift finish line, creating enough room for social distancing.

“That was a surprise for me,” Vinacco said. “I didn’t know that was happening.”

Vinacco has been taking some time off to recuperate since the run but he won’t stay grounded for long. The Boston Marathon has been rescheduled for Sept. 14, and he plans to be there.