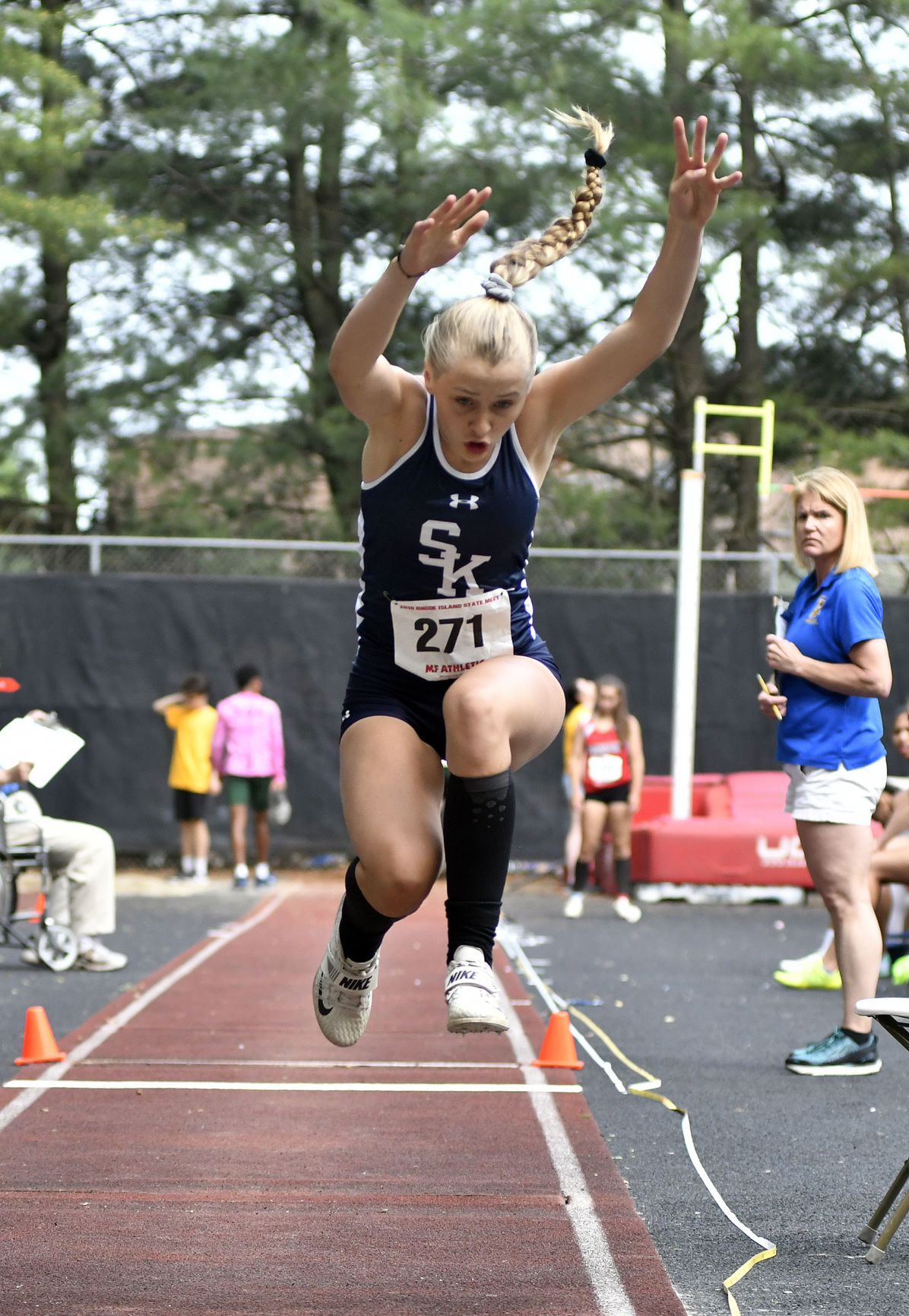 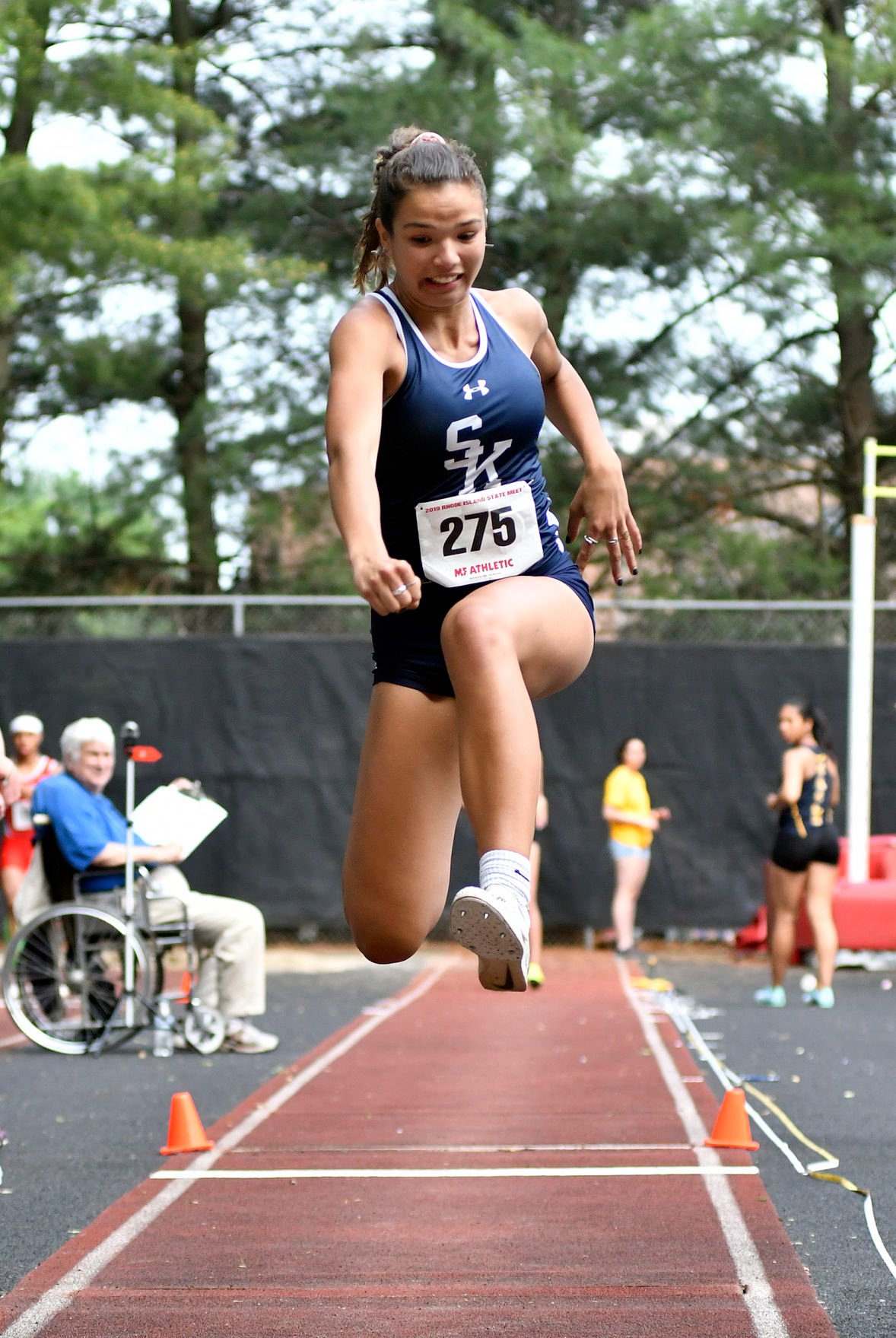 Katie Madore went to the first practice of the season her freshman year and didn’t come back for two weeks because she wasn’t sure she liked it.

Sydni Vesterholm grew up playing soccer and basketball but didn’t try track until middle school, where the event that would become her specialty wasn’t even offered.

From those beginnings, the South Kingstown High School seniors became the top two triple-jumpers in the state last season, embracing their new pursuit along the way and charting a future in the sport.

“If I didn’t stick with it, I don’t even know what I would be doing,” Madore said. “It’s given me so many opportunities and it’s honestly taught me a lot of things, too.”

“I started track in middle school, but I didn’t take it that seriously,” Vesterholm said. “When I got to high school, it became my favorite sport.”

Madore and Vesterholm became the flag-bearers last spring for South Kingstown’s jumping corps, a group that has been hugely successful in recent years. Madore took the gold medal in the triple jump at the state meet, and Vesterholm grabbed silver as the runner-up.

Their status as the state’s best endures, but not in a welcome manner, with the spring season canceled due to the coronavirus pandemic. They were both disappointed to miss out on one more spring of competition and time with teammates, but they’re excited that their careers will continue. Madore will join the track and field team at the University of New Hampshire, while Vesterholm is set to do the same at Coastal Carolina University.

Those opportunities would not have been on their radar four or five years ago.

“I did it in middle school, just in eighth grade and it was kind of fun,” Madore said. “Freshman year, my dad told me to do it. He said, ‘You might as well try it out.’ I actually showed up to the first practice and then didn’t show up for two more weeks because I didn’t like it. And then I was like, ‘Oh, maybe I’ll go and try it again. It’ll keep me in shape, keep me busy.’”

“When we went back, we switched and we ended up loving what we were doing. It just started from there,” Madore said. “We kind of thank each other.”

The new event became a passion for Madore. She learned a lot from coach Eric Anderson and realized the independence of track suited her.

“Coach Anderson has taught us a lot about life. I don’t even know where I would be if I hadn’t done it,” Madore said. “I played soccer my whole life. Track is different – you don’t rely on anybody else. It’ s just you. So if I make a mistake, it doesn’t affect anybody else. It just affects me. It’s very independent. I love that, being able to set goals for just yourself.”

With Vesterholm also excelling in the triple jump, the standouts could enjoy that independence without being completely on their own.

“We push each other so much,” Madore said. “At meets, if she jumped a certain measurement, then I would want to beat it, and then she would want to jump further. It was great to have somebody else doing it with me. It makes you better.”

Vesterholm was also new to track when she started out, having focused mostly on soccer and basketball when she was growing up. She found she liked the inherent fairness and justice of track – work hard, see results.

“I like how whatever work you put in, you always get something out of it,” Vesterholm said. “As a team, even if you put in all the work you can, it might not change the outcome. In track, you get rewarded for all your hard work.”

Vesterholm’s above average height made jumping events a natural fit. In addition to her success in the triple jump, she was also the state runner-up in the high jump last year.

“I’m very tall, so that helps,” Vesterholm said with a laugh. “I didn’t even know triple jump was a thing until I got to high school. They didn’t even have the event in middle school. A lot of my friends still don’t know what it is, but I really like it. I don’t even know why, but it’s fun.”

Vesterholm was hoping to challenge her teammate for triple jump supremacy this year, but that isn’t the biggest things she’s missing this spring.

“Just the last season with my team,” she said.

Madore feels the same way. She also had big goals, having ended last year just two inches shy of the school record in the triple jump.

“That was really frustrating because I had been telling myself I was going to get it this year, and now I wouldn’t be able to even try,” Madore said. “It’s also just not being able to be with my team one last time, going out there and representing SK again.”

Significant team success was also a possibility. The Rebels finished third at the state meet last season. With Madore and Vesterholm back in the fold, along with champion pole vaulter Lyons and junior standout Chloe Greene, South Kingstown might have been able to challenge for the top prize.

There is solace in all the seasons that came before the one that was canceled. Both Madore and Vesterholm are three-sport athletes. They were members of the state championship soccer team in the fall. Vesterholm was also a key player on the championship basketball team in the winter, while Madore completed a solid gymnastics career.

“I loved it so much, especially because I got to do it all with my friends,” Vesterholm said. “Practice was never a chore. It was always something that I looked forward to. It was just such a good experience overall. And getting to win, I felt so happy because I know everybody put in so much work and it finally paid off.”

For a big class of standout senior athletes, the memories will last.

“I’ve played soccer and done gymnastics in this town my whole life, so I’ve grown up with all these girls,” Madore said. “I’ll always remember that – how close we all were. We’re all just best friends. We’re like a family.”