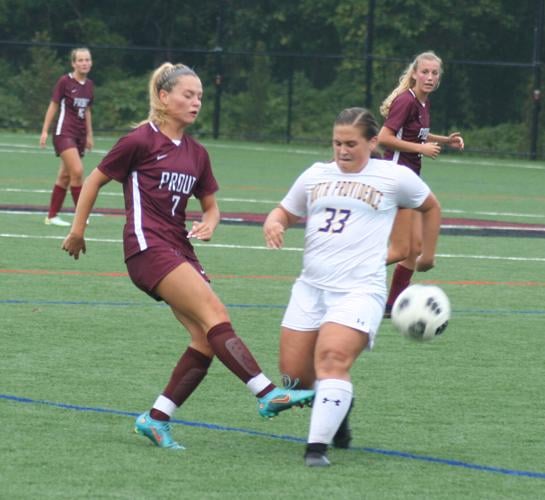 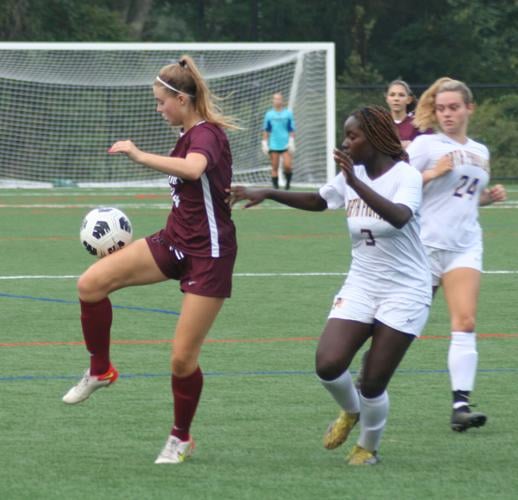 SOUTH KINGSTOWN — Giving up a pair of leads hurt, but an offensive breakthrough and the first points of the season in the standings were enough to put Monday’s game on the positive side of the ledger for the Prout girls soccer team.

The Crusaders played North Providence to a 2-2 tie on the school’s new home turf. The tie gives Prout its first points of the season in the Division II standings, after a loss to Mount St. Charles in their league opener. They hadn’t scored a goal in any of their league and non-league matchups.

“Last game, our defenders and our center mids were our strong suit, and we were a little weaker up top. This game, I thought we were strong all the way through the field, so that’s growth from last game,” head coach Christina Armstrong said. “Am I disappointed we didn’t get the win? Yes. But to see them grow in such a short period of time, we’re happy with how they played.”

Prout was the Division II runner-up last season and is extremely young this year. But it’s a group that’s receptive to coaching, and the differences in Monday’s game and the league opener showed it. Against Mount St. Charles, the Crusaders possessed the ball well but didn’t create chances. On Monday, they possessed it and put shots on net, and it paid off.

The game was scoreless into the second half. Prout broke through in the 50th minute, when Kelsie McConnell knocked home a cross from Taylor Roberts for the 1-0 lead.

After North Providence answered in the 62nd minute, Prout regained the lead when Reese McIntosh turned and fired a missile from the top left corner of the box that beat the North Providence goalie in the 73rd minute.

Four sophomores accounted for the goals and the assists.

“The majority of the minutes from our forwards are the sophomore class,” Pesante said. “They’re very hungry sophomores. They want to make a difference, and they’re so willing to learn. Their soccer IQ is high. Today, we said, ‘Go out there and shoot,’ and that’s exactly what they did.”

Prout was minutes away from the victory when North Providence rallied one more time. In the 78th minute, a breakaway led to the equalizer. Neither team scored in the final two minutes.

“Little breakdowns because we’re young,” Armstrong said. “Nothing too detrimental. We just have to do a lot of teaching. It s a work in progress, but we’ll get there. I see the potential.”

The Crusaders were set to visit Bay View on Wednesday.

Do you believe RI will move toward tolling all vehicles now that a truck-specific policy has been deemed unconstitutional?

Last week, a federal judge ruled that Rhode Island's truck-specific tolling policy on highways across the state was unconstitutional. While the state has not yet commented on whether or not it plans to appeal the decision, longtime critics of the move toward truck tolls said the ruling was a victory. Others said they viewed the ruling as the first step toward Rhode Island lawmakers repealing a law passed at the same time as the truck toll policy that banned the tolling mechanisms for being used for individual passenger vehicles. Do you believe Rhode Island will move toward tolling all vehicles now that a truck-specific policy has been deemed unconstitutional? Why or why not? Let us know in this week's poll question below.