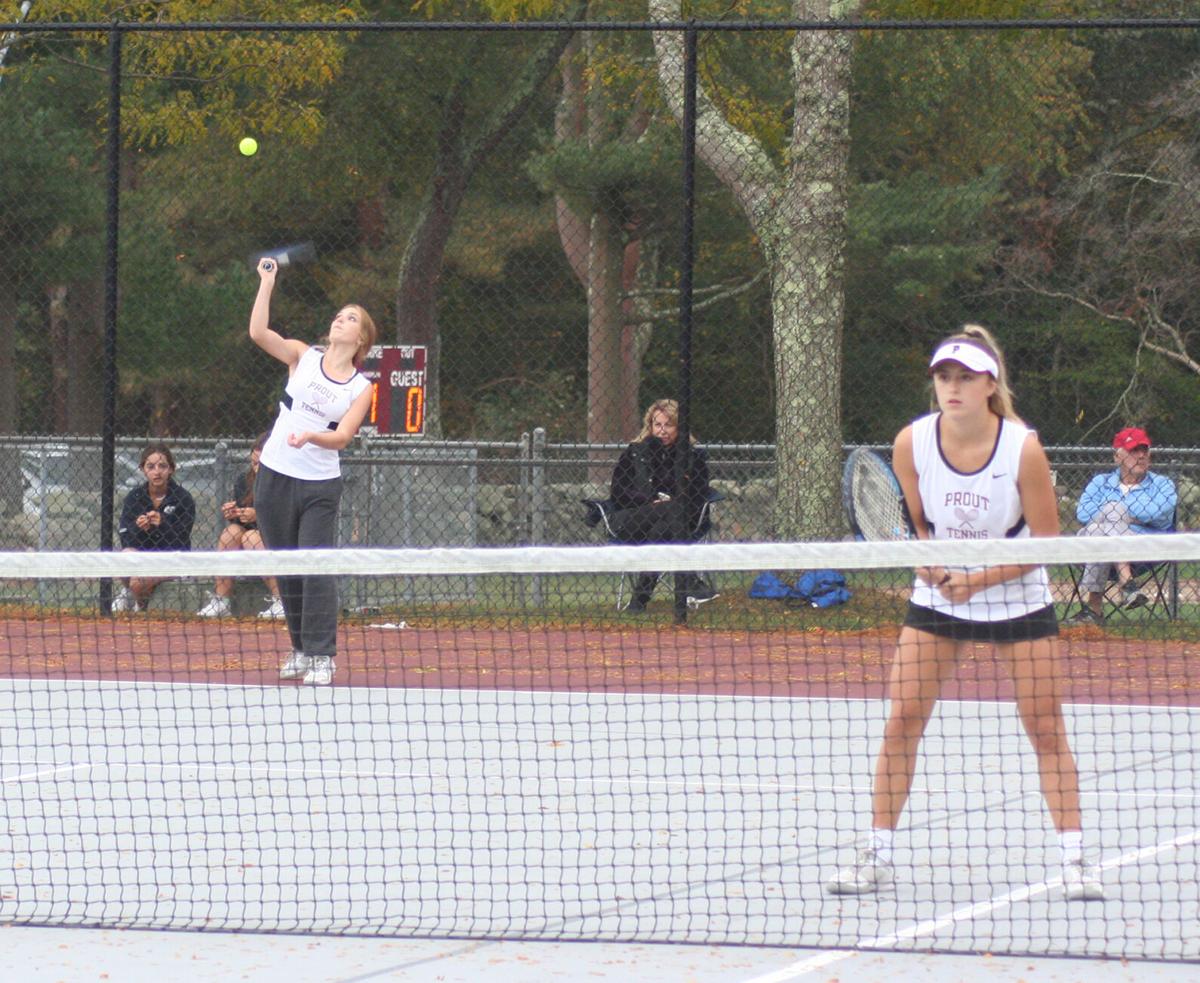 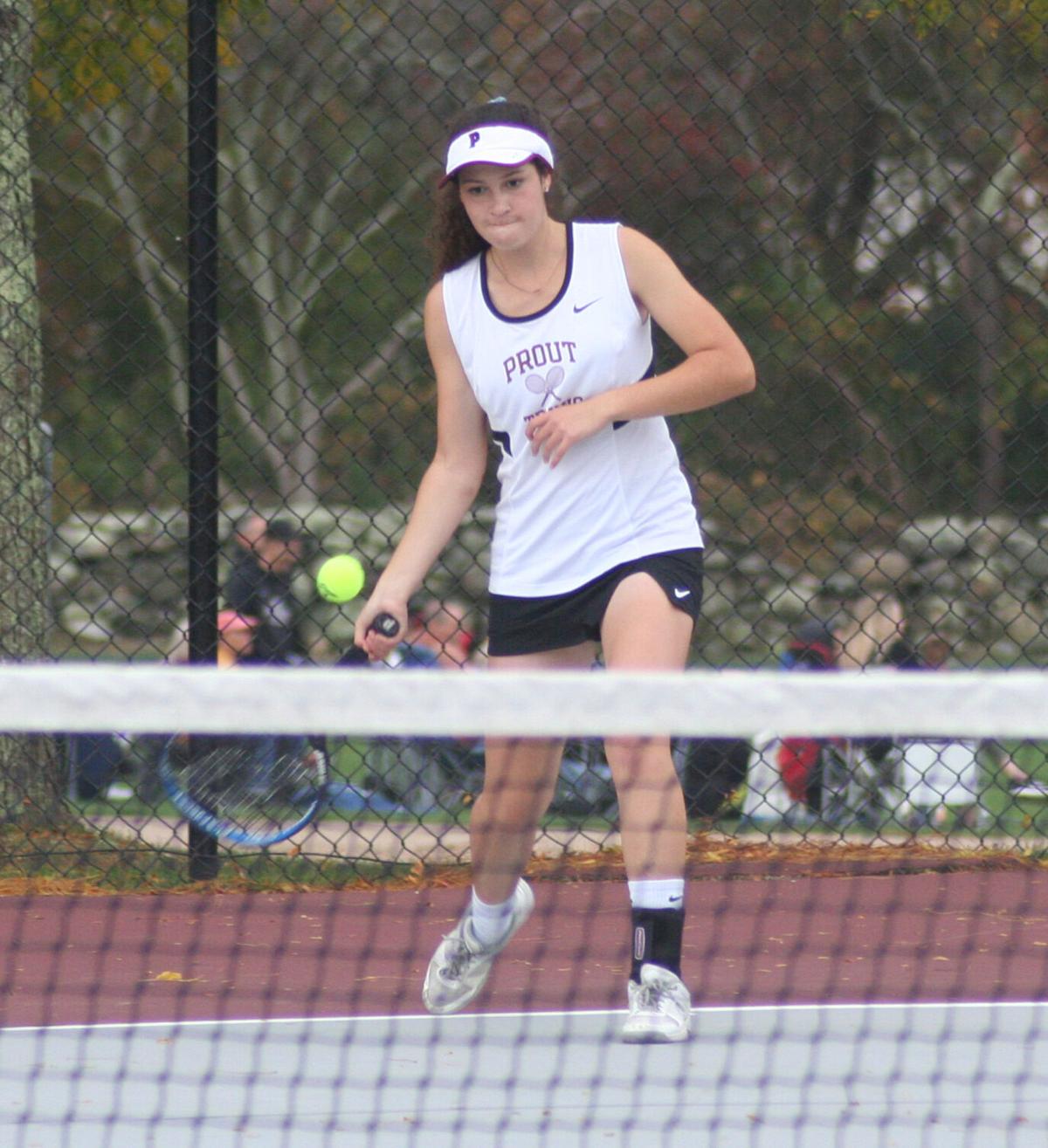 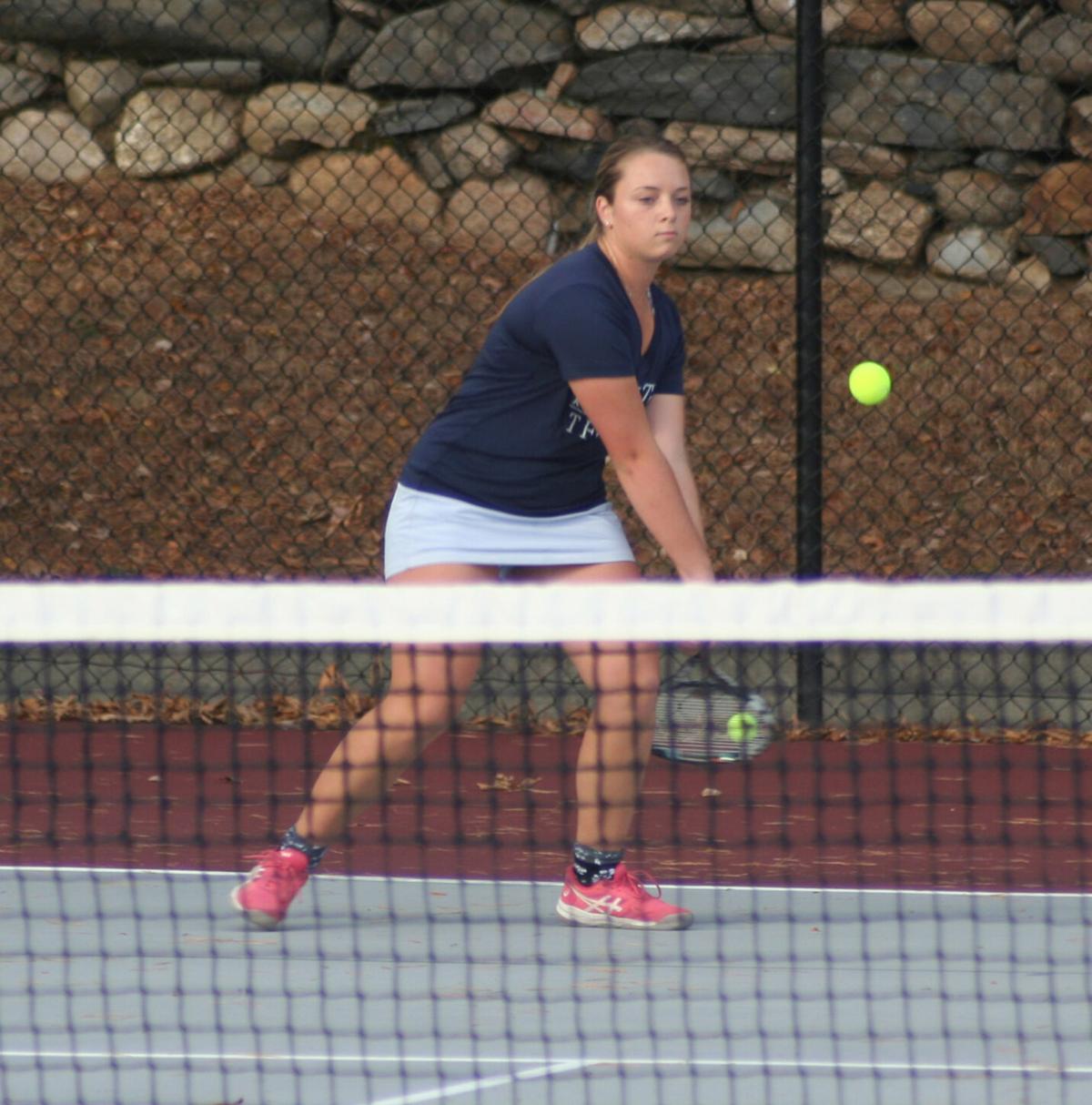 SOUTH KINGSTOWN — A lineup shuffle, a change in routine and a strong push from the opposition made Monday’s playoff match a challenge for the Prout girls tennis team.

But the Crusaders were up for it.

Second-seeded Prout edged No. 7 South Kingstown 4-2 in the opening round of the Division II playoffs. The No. 1 doubles tandem of Maddie Green and Leah Hauser scored the clinching point to send the Crusaders to the semifinals, where they’ll face No. 3 Middletown.

“We had to keep a positive attitude the whole time,” said senior Abby Smith. “If things started to go awry, we just had to keep going. Honestly, our whole team just played great today. I’m really proud of all of us.”

The Crusaders went 14-2 in the regular season but weren’t at full strength on Monday, with No. 2 singles player Mia Renzulli sidelined. Breck O’Connor and Maddie Mattiucci both moved up one spot in the singles ladder, and Smith came up from No. 1 doubles. The moves also broke up a doubles duo that has had a great year; Smith and Hauser went to the state tournament as a doubles squad.

On top of the lineup switch, Prout didn’t have school on Monday and a rainy morning may have had players thinking they wouldn’t be playing in the afternoon.

“I’m proud of the way the girls played today, all things considered – day off from school, down a player,” head coach Sarah Steverman said. “They came out stronger in the end.”

South Kingstown also presented a difficult foe, having won four of its last five matches in the regular season.

“It’s always a bit of a rivalry match against South Kingstown,” Steverman said. “The unique aspect of this season is we had faced this team already. We did have some strategy going into the match to try to turn around the mistakes we made the last time. I think communicating those strengths and weaknesses kind of gave them confidence.”

Still, it was a tense match, especially after South Kingstown put the first two points on the board. Olivia Zeyl beat O’Connor 6-3, 6-1 at No. 2 singles and Grace Cummiskey topped Megan Mancini 6-4, 6-4 at No. 1 singles.

Prout tied the match when Isabel Leal and Lena Eng won at No. 2 doubles, beating Emma Davis and Avery Birrell 7-6 (7-5), 6-4. Davis and Birrell were threatening to push the second set into another tiebreaker but the Crusader squad held them off.

Smith closed out a long match with Zoe Pollack 6-2, 6-3 to put the Crusaders up 3-2. Green and Hauser then finished things off with a comeback victory at No. 1 doubles. After winning the first set 6-4, they saw South’s Abi Guertin and Danica Mason roar back for a 6-1 win in the second set. Green and Hauser fell behind 1-0 in the third set but finished strong for a 6-3 win that clinched the match for Prout.

“They absolutely rallied,” Steverman said. “I’m really proud of them and of Abby for her versatility, to be able – on a couple of hours notice – to step up to play singles. And I really appreciate the doubles teams having flexibility. We’ve had all had to be flexible during these times anyway and it’s showing on the court in a positive way.”

The loss ended a solid season for South Kingstown, which finished at 9-8-1.

Prout is turning its attention to the semis, as it moves one step further than it got last year. In the abbreviated fall season of 2020, the Crusaders went undefeated in the regular season but were upset by another local rival, Narragansett. This time, it’s full speed ahead.

“Last year didn’t really end the way we wanted it to,” Smith said. “This year, we’re looking for redemption. We’re hoping to make it all the way.”