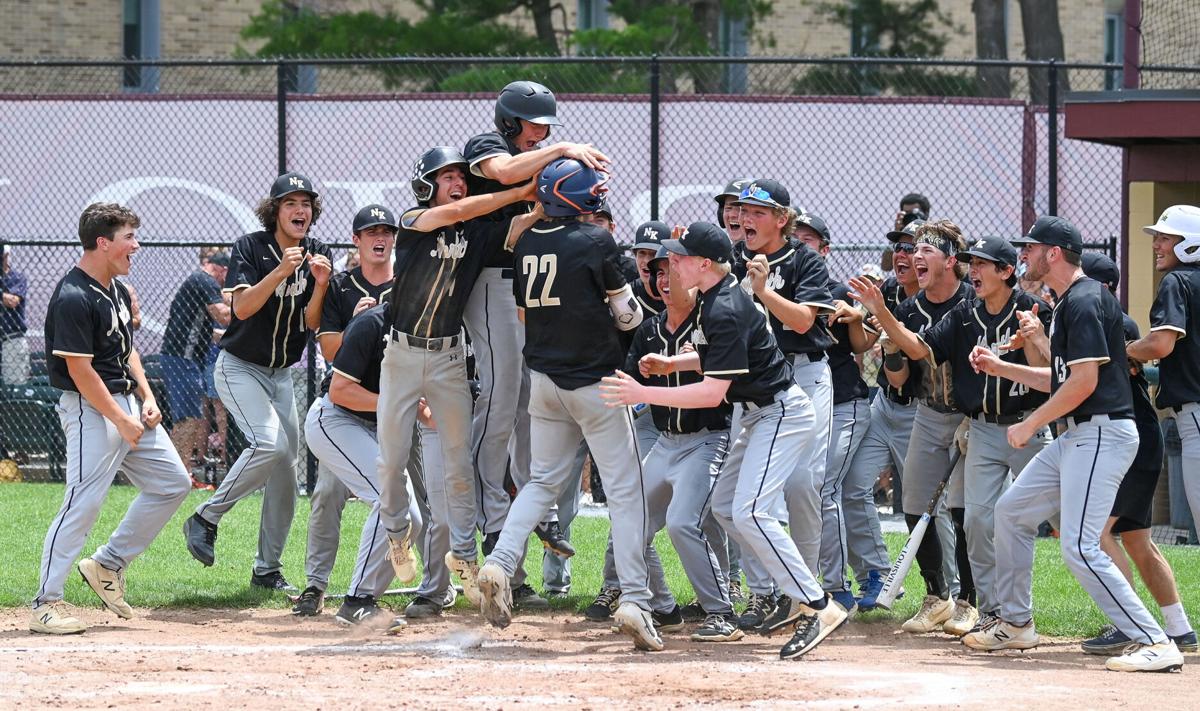 Teammates greet Josh Lincourt at home plate after his grand slam in game three of the state championship series. 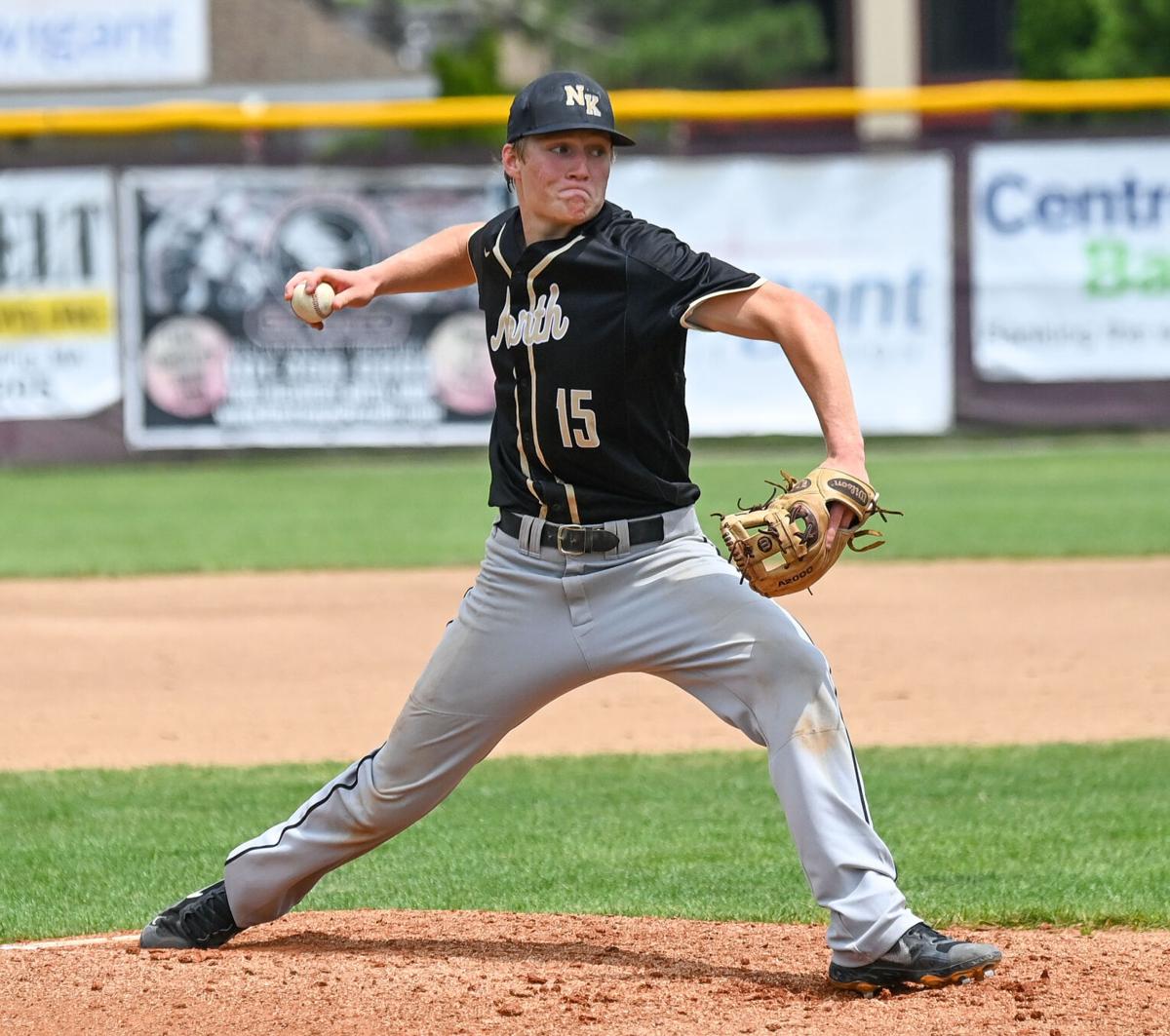 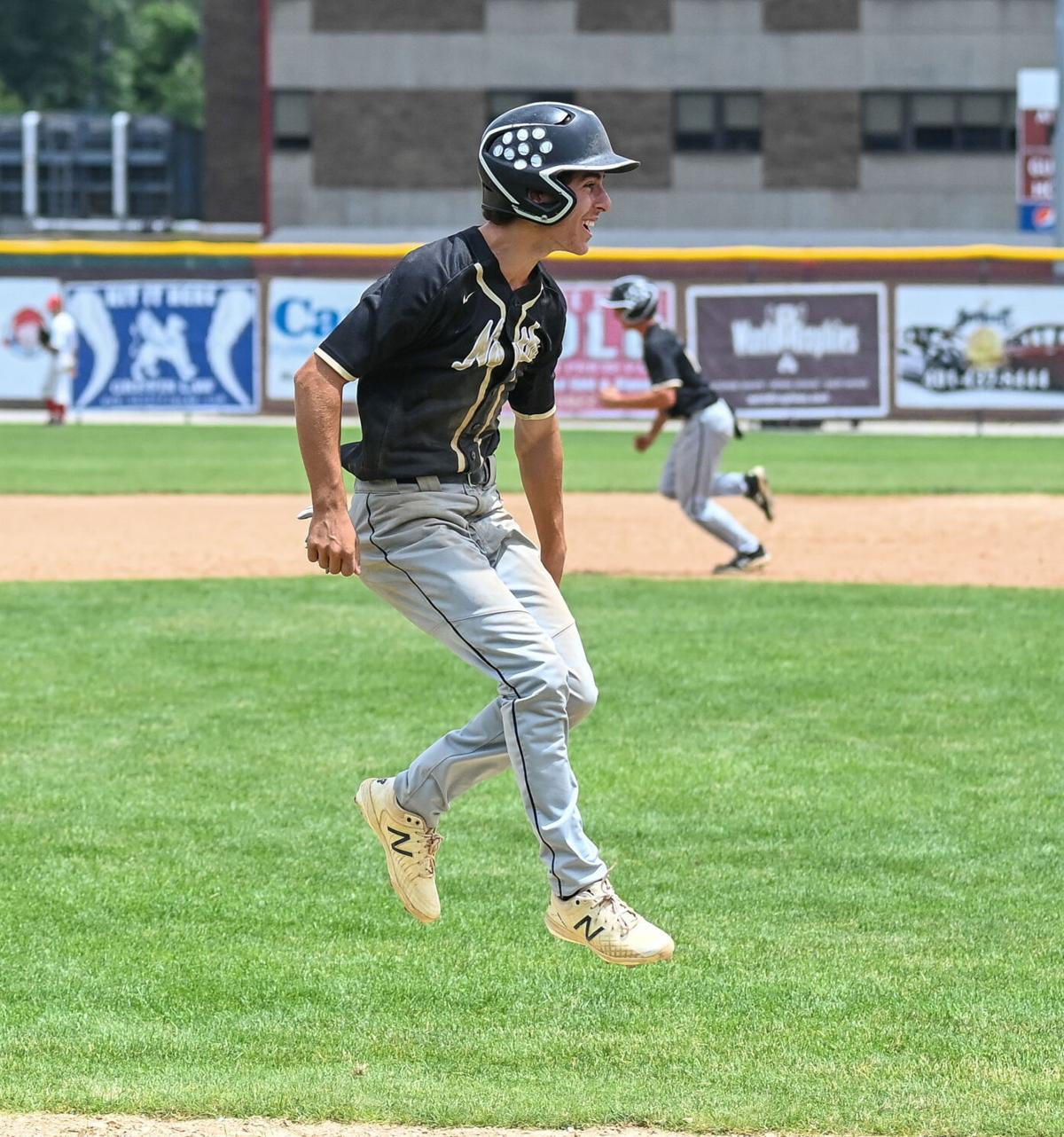 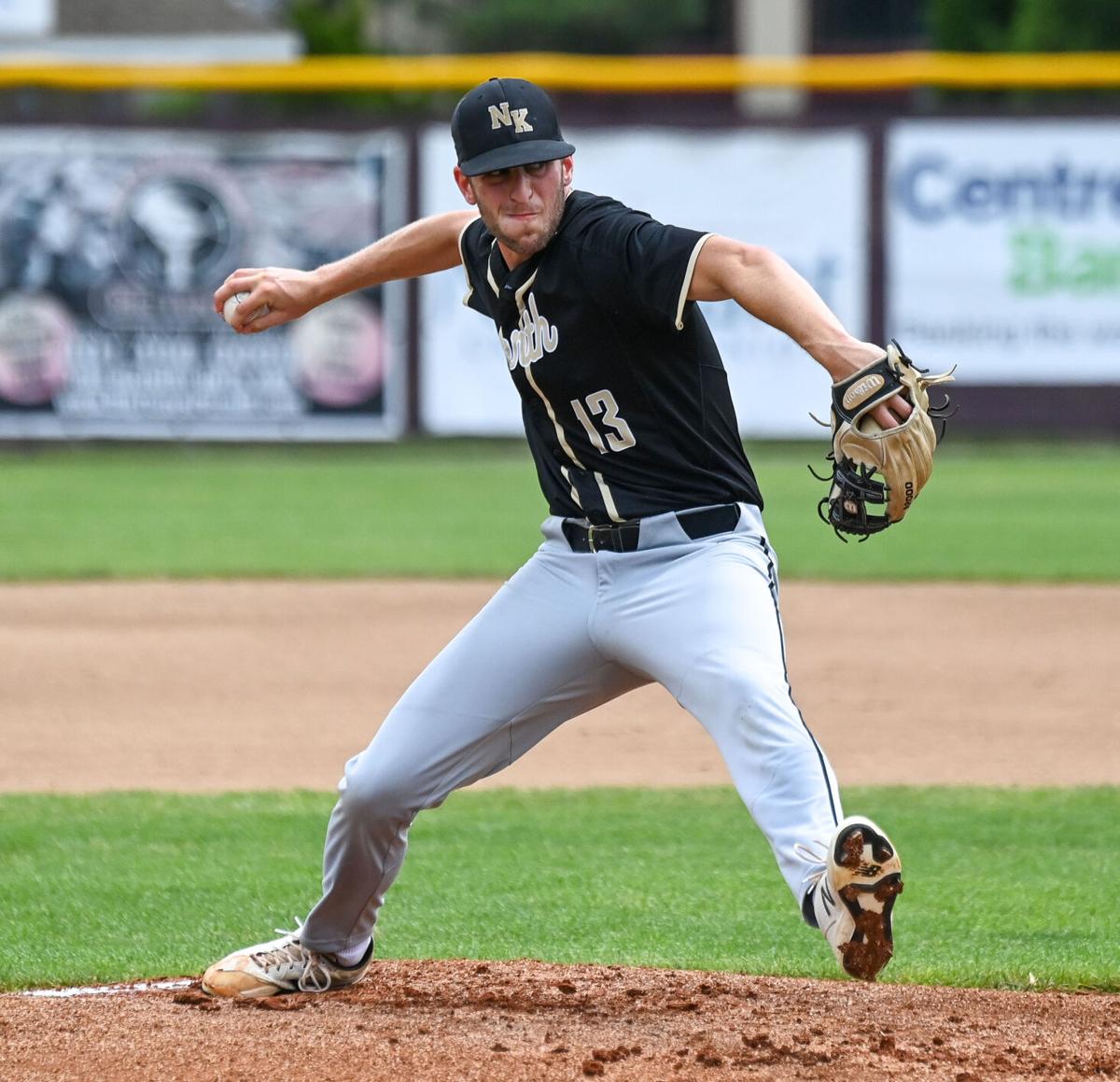 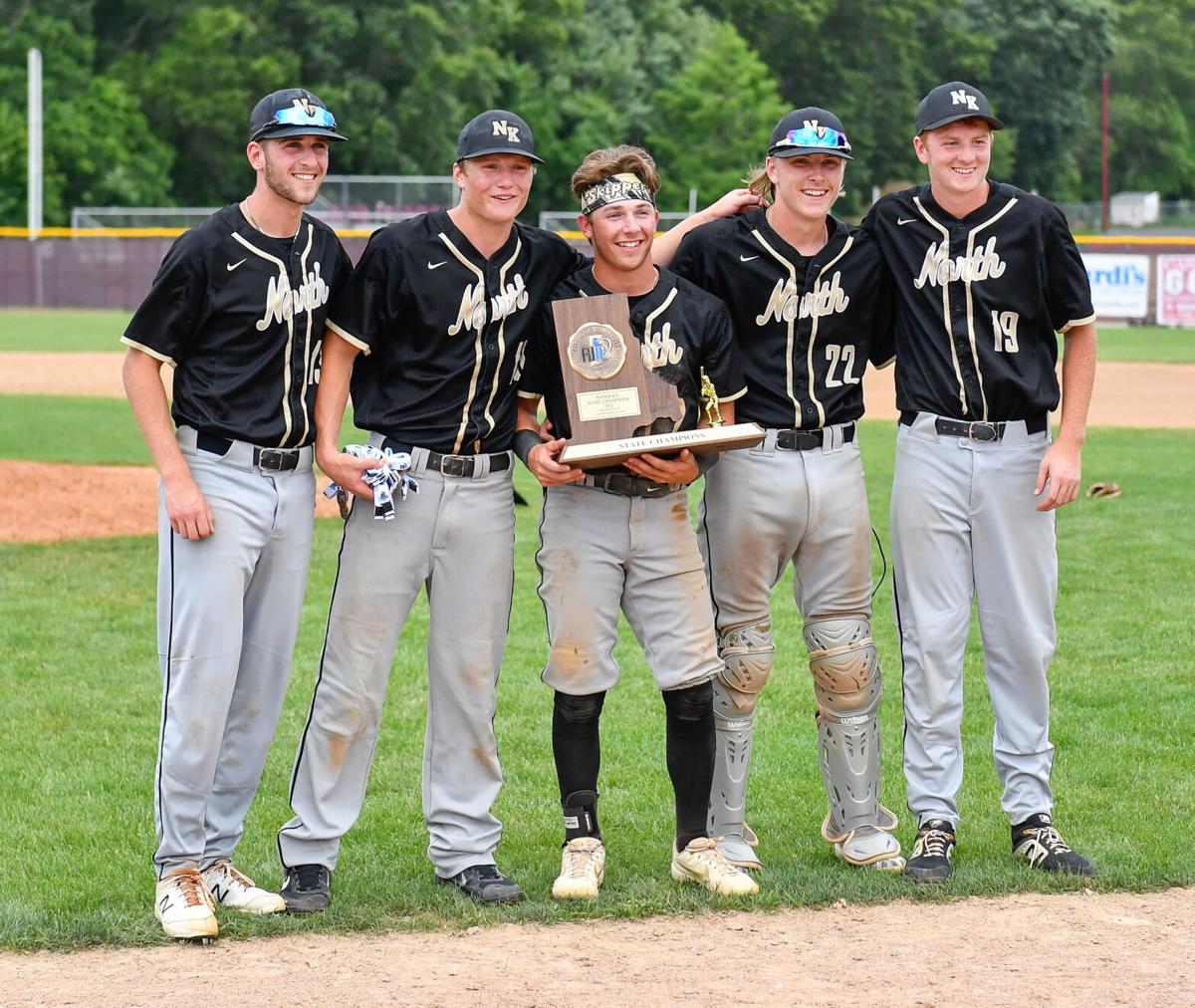 Teammates greet Josh Lincourt at home plate after his grand slam in game three of the state championship series.

PROVIDENCE — On a fall Saturday in 2018, a long way from baseball season, members of the North Kingstown High School baseball team gathered at Lischio Field.

They pulled weeds. They raked leaves. They cleaned up. Longtime head coach Kevin Gormley had just decided to the return to the helm the next spring after four years away, and that Saturday was the tone setter for his return. It would take that kind of work, that kind of pride, to get North Kingstown baseball back to where it belonged.

Two-and-half years later, the work put in, the pride on display, a canceled season providing motivation and a series of challenges sharpening them, the Skippers opened the 2021 playoffs with an 8-2 upset win over La Salle.

Suddenly, they knew what it would take for the next step.

“NK lost its swag for a long time,” senior third baseman Justin McCarthy said. “When coach Gormley came back, everybody knew it was just a matter of time. Once we beat La Salle in the first round of the playoffs, we finally got that swagger back.”

The win over La Salle started a run that will go down in North Kingstown athletics lore. The Skippers won four straight games for a spot in the Division I championship series, then made it five with a win in the series opener. Coventry evened the series in game two, but the Skippers didn’t waver, doubling down on the grit that got them this far and winning the state title with an 8-3 win on Sunday at Rhode Island College.

It’s the second baseball title in school history and the first since 1967, a hard-to-believe, 54-year drought that included seven runner-up finishes.

“I’m happy for the kids,” Gormley said. “I don’t think we need a state championship to justify what we do at North Kingstown High School, with the tradition that we have. I know we develop players. When you develop players, you develop teams. We’ve been knocking at the door a long time and it feels good to kick it down.”

These Skippers were perhaps not the likeliest group to be the one. They have two Division I commits in the junior class but only four seniors on the roster. The starting lineup regularly featured four sophomores. They made an early impression, though, taking a lead into the final inning of the season opener at Bishop Hendricken before giving up a late rally. From the beginning, there was a good vibe.

“I like this group,” Gormley said in week two of the regular season. “They get it. They’re a gritty bunch.”

As the Skippers hit ups and downs in an 8-5 campaign, it seemed those qualities would provide building blocks for a run in 2022. Instead, the Skippers got hot. They won two straight to end the regular season, beat La Salle and Cranston West in the single-elimination rounds of the playoffs and swept Pilgrim in the semifinals. Nobody was thinking about 2022. The mantra was to seize this moment.

After splitting the first two games of the championship series with Coventry, the Skippers grabbed hold tight of the biggest moments on Sunday.

Riding momentum from Saturday, Coventry got a runner to third in the top of the first inning. Starting pitcher Noah Quarella induced a ground ball to shortstop. Based on positioning, the Skippers were conceding a run, but T.J. Gormley saw an opportunity and fired home to cut down the run.

“I thought that play in the first inning was a real tone setter,” the elder Gormley said. “They had a little momentum. Usually, you’re taking the out at first base. I don’t know what he saw, but he threw a laser to home. That really kind of settled us down, I thought.”

That play allowed the Skippers to score first instead. Wyatt Daft doubled to lead off the second inning and came around on a base hit by Robbie Lamond.

Coventry tied the game in the bottom of the second inning, but the Skippers exploded in the third. Will Brew singled, Gormley was hit by a pitch and Andrew Ciarniello worked a walk. Josh Lincourt then delivered the biggest hit of the season when he smashed a 1-1 pitch to deep center field. It sailed over the 400-foot sign for a grand slam.

It was a 5-1 lead for the Skippers that felt bigger thanks to the thunderous blast that built it.

“The wind is pumping here and it just kept on carrying,” Gormley said. “I saw the center fielder look up and I was like, ‘Oh my god.’ That ball was crushed. That’s the longest ball I’ve seen hit all year.”

Quarella allowed a run in the bottom of the third but left two runners in scoring position, then worked a scoreless fourth. The senior has been a solid No. 3 for the Skippers this season and he gave the Skippers what they needed.

“Honestly, I was just thinking, ‘Go out and pitch as best as I can,’” Quarella said. “Never going to get this opportunity again. I’m a senior, it’s my last game. What better game to start than game three of the championship?”

Lincourt knocked in two more runs in the fourth inning with a wind-blown popup that Coventry couldn’t handle. The Oakers pushed a run across in the bottom of the fifth and were threatening for more when Kevin Gormley made the call to the bullpen. T.J. came in from shortstop.

“I said, ‘It’s your game, buddy,’” Kevin Gormley said. “He’s been our closer all year. I gave it to him a little early. Noah Quarella kept us right in there, did a great job. Seniors step up when they need to. T.J. is gutty. He’s my guy and I love him to death, but he’s a competitor. That’s probably his best trait is that he competes. When you give the ball to somebody, you want the competitor.”

With runners on first and second, Gormley struck out Jason Desjarlais to end the threat.

“Just get an out,” T.J. Gormley said. “I struck the kid out and trusted my defense the rest of the way.”

Two runners reached in the sixth with the top of the order due up, but Gormley retired the next three batters in a row. The Skippers added a run in the top of the seventh as Daft reached on an error and McCarthy drove him in with a single.

Coventry’s Will Turner led off the bottom of the seventh with a single and Voelker walked. Gormley got Tommy Turner to hit a sharp ground ball to second, where Brew flipped to McCarthy to start a 4-6-3 double play.

With the Skippers one out away, Gormley struck out Desjarlais on four pitches. After the final swing, he threw his glove in the air. Lincourt charged from his catcher’s spot and embraced him, both quickly enveloped in a dogpile.

“It’s been a wild 15 minutes but it feels good,” T.J. Gormley said as the celebration died down. “It feels good to be a champ.”

“It means the world,” McCarthy said. “We bonded on the dugout and in the field. To come here and win it is unbelievable.”

It was a long time coming. The current Skippers were in elementary school the last time North Kingstown came up short, in the 2013 finals. They were aware of the history without being impacted by it.

“I’ve heard about that, but I wasn’t on any of those teams,” Lincourt said. “This team, we just stayed strong.”

Their comeback from the game two loss was one final example. The grit that showed up on day one never faded.

“We’ve been talking about their grit all year,” Gormley said. “It’s certainly not the best team I’ve ever had. That would be a disservice to all the great players that came through North Kingstown. But they’re gritty. We’ve had gritty teams before. We got some breaks. Seventh time here and we finally caught some breaks. Yesterday was tough, but I knew this group would come back. They showed up this morning with a little hop in their step. I felt good about it.”