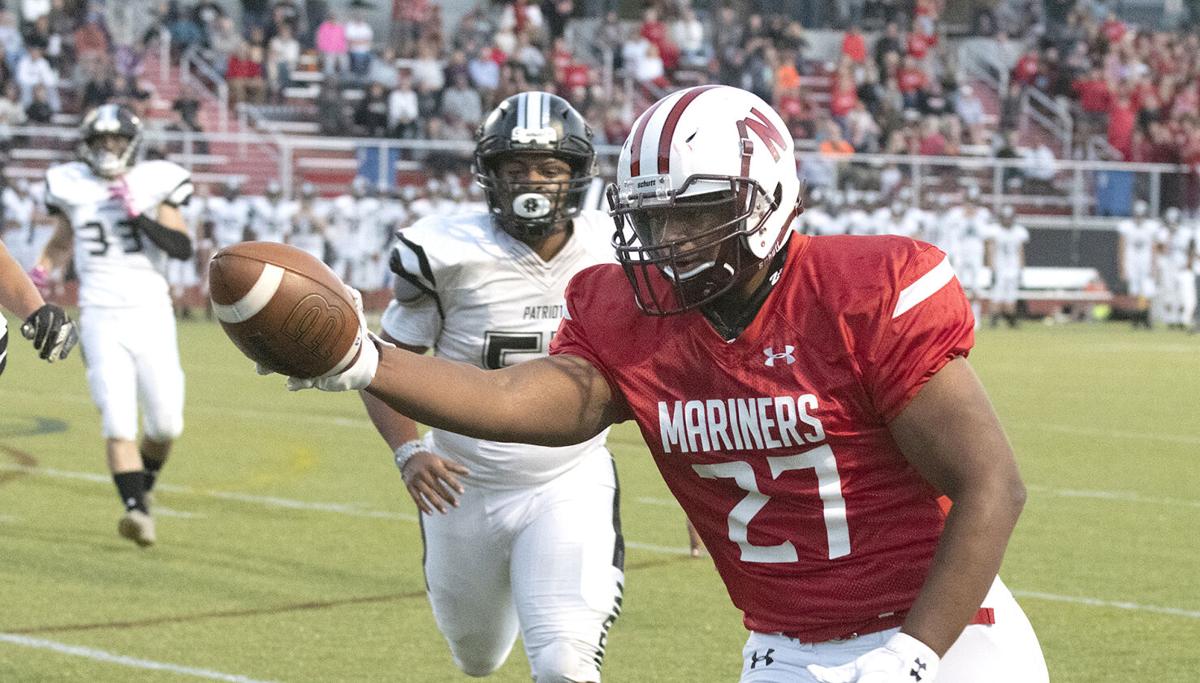 Narragansett's Mekhi Wilson holds out the ball as he runs into the end zone during Friday's game against Pilgrim at Narragansett High School. 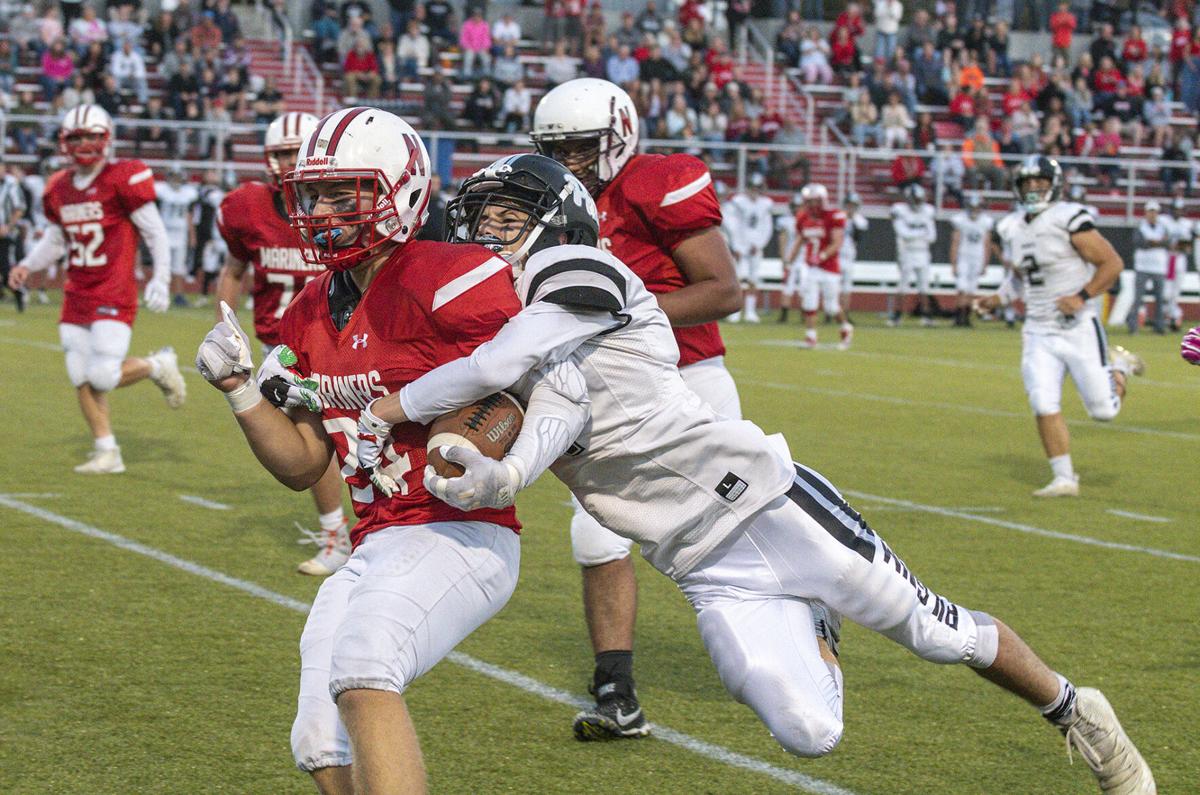 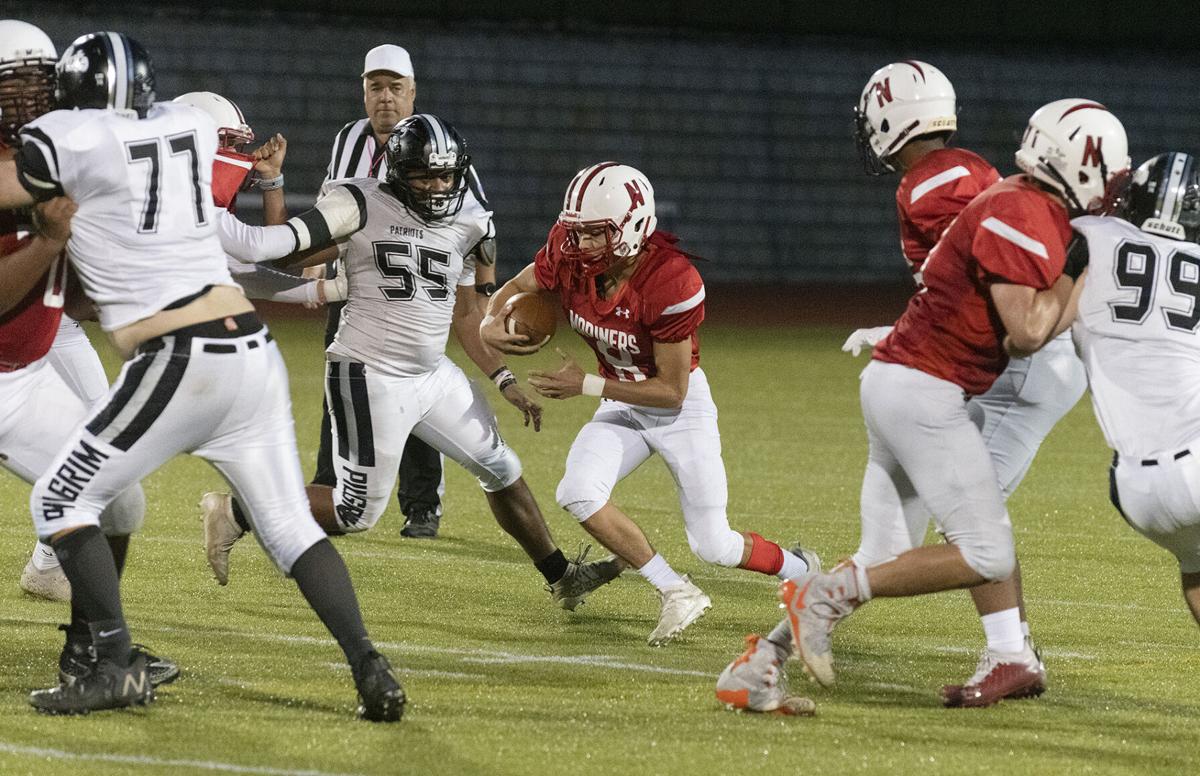 Narragansett's Mekhi Wilson holds out the ball as he runs into the end zone during Friday's game against Pilgrim at Narragansett High School.

NARRAGANSETT — The situation was similar.

But these Mariners are at a new level.

When Pilgrim visited the Narragansett High School football team in 2019, it was a battle of unbeaten teams. The Patriots won big and later went on to the Division III championship.

The sequel came Friday night, with the familiar foes emerging as the top teams in D-III again, and Narragansett staked claim to the very top spot with an overpowering performance in a 55-40 win at Jim Zepp Field.

“About two years ago, we played these guys on senior night and they came in and threw us around the field pretty much,” said junior receiver and defensive back Harry Lague. “We worked extremely hard all week. We had great leadership from the seniors. And our juniors like Mekhi Wilson really stepped up tonight. That’s what got the job done.”

The win puts the Mariners at 4-0 in league play and 4-1 overall, their lone loss coming to Division I South Kingstown. After surviving some bumps in the road early in the season, they’ve been playing at a significantly higher level the last two weeks, putting up 98 combined points in games against Johnston and Pilgrim, both of whom figure to be top challengers.

“We knew we were sitting on a lot of potential,” head coach Matt Blessing said. “The numbers have been great again this year, after having success last year. We had about 70 kids last year and about 70 again this year. When you have those kinds of numbers, you’re going to find some diamonds in the rough.

“After last season, we were able to assemble a true line. We lost Sebastian Giramma, our big lineman, the last two games of the season. Other guys stepped in, got that experience under their belt. This is the first time we’re not pulling a tight end in and saying, ‘You’ve got to play tackle.’ It’s a big step forward for the program.”

The Mariners started fast against Pilgrim, jumping to a 7-0 lead and bumping it to 28-12 before halftime. The Patriots returned the opening kickoff of the second half for a touchdown and seized momentum from there, but the Mariners pushed back with a dominant fourth quarter. A trick play pass from Peanut Chaloux to Lague that went for a 55-yard score was the spark in a four-touchdown final period. A powerful running attack gained steam as the game went on, with the Mariners wearing Pilgrim down.

“They stayed up,” Blessing said. “We knew Pilgrim was going to come back at us. They’re a talented team, they’ve got some athletes over there, no question. They make plays. We were concerned about it. That big score after the half, kicking myself for not calling an onsides there. You could see them getting more and more. That’s live and learn. Momentum is a big thing in this game. Our guys were able to face that momentum, step their game up a notch and take that commanding lead at the end.”

Junior Mekhi Wilson started the scoring with a 5-yard touchdown run in the first quarter, the start of a breakout performance. After Pilgrim made it 7-6, the Mariners got a 6-yard touchdown run by Reider Fry and a short touchdown pass from Phil Theroux to Tyler Poirier for the 21-6 lead.

Pilgrim made it 21-12 with 1:44 left before halftime, but that turned out to be more than enough time for the Mariners to answer. A 24-yard touchdown pass from Theroux to Lague, plus Lucas Masson’s extra point, made it 28-12. Pilgrim threatened to keep the back-and-forth going for one more score, but Poirier intercepted a pass in the end zone with four seconds left.

After the break, the Patriots began to make their move in a flash. Alexander Pinheiro brought the opening kickoff of the second half 80 yards for a touchdown. Just like that, it was back to a one-score game.

Narragansett was on the verge of a strong response, driving deep into Pilgrim territory. A fourth down pass from Theroux to Poirier looked like it would be a touchdown, but Poirier was hit short of the end zone and then fumbled the ball as he reached out for the goal line.

Pilgrim recovered the fumble and promptly drove 75 yards for another score. Connor Widmer’s 1-yard touchdown run made it 28-26. A pass fell incomplete on the two-point try, keeping it a two-point Mariner lead.

With Poirier battling a cramp, the Narragansett offense went nowhere on its next drive and punted, keeping momentum squarely on Pilgrim’s side. The turnaround began when the Mariners forced a turnover on downs thanks to four straight incomplete passes. Then it really got going with the trick play. Set up for third-and-6 after the break between quarters, the Mariners called it. Chaloux, a wide receiver and defensive back, took the pitch from Theroux, rolled right, and lofted a deep pass to Lague, who caught it and then found daylight, racing all the way to the end zone.

“We were sitting on that,” Blessing said. “We almost broke that out against Johnston, but we kept it in the bank, thinking, hey, we don’t need it tonight. We moved the ball so well up there. Pilgrim came back like I had a feeling they would and got a little momentum, so that really stung them. Great to see Harry step up. Peanut is a kid who played quarterback in the Pop Warner League so he was ready to step up and throw.”

Masson’s extra point made it 35-26. The game felt different.

“They had a lot of momentum,” Lague said. “To make that play and for it to work out the way that it did, it just brought all the momentum back to our side.”

And it stayed there. The Narragansett defense came up with a turnover on downs ahead of 63-yard scoring march by the offense. Wilson scored from 31 yards out to make it 42-26. The Mariners then recovered an onside kick as they sought the final blow, and delivered it three plays later. Fry powered in from 27 yards out to make it 49-26.

After a Pilgrim score and a recovered onside kick, Fry sacked Widmer and forced a fumble. The Mariners recovered. On the next play, Wilson wrote the exclamation point with a highlight reel 46-yard touchdown run. The junior was nearly tripped up at the line, but used a hand to keep his balance, then broke away from the defense.

“I’ve grown up with Mekhi since preschool and he’s always been the most athletic kid in our grade,” Lague said. “To be the size that he is and to be running like that and making moves like that, staying on his feet – he almost got tackled and it was like something out of Madden. I was like, ‘Oh my God.’ It was awesome to watch.”

Wilson, who missed the spring season with an injury, adds another weapon to a rushing attack that already featured a standout in Fry. Wilson is the son of legendary South Kingstown running back Mike Wilson. He also missed a few games early this season, so his emergence was slightly delayed.

“I liked watching my boys line it up in the championship,” Wilson said. “But it was a rough recovery. Very good to be back.”

“It’s something special. There’s going to be a lot more to see,” Blessing said. “I think it balances our attack, gives us a 1-2 power game.”

Fry and Wilson both went over 100 yards rushing as the Mariners racked up 331 yards on the ground. Fry carried 23 times for 146 yards and Wilson had 11 carries for 140 yards. Theroux completed 17 of 26 passes for 218 yards as the Mariners totaled a whopping 604 yards of offense. Masson was seven-for-eight on extra points.

“We’re very confident,” Wilson said. “Everyone is ready to go if they get called up.”

Narragansett is slated to face another potential contender this week, with a road game at Middletown on Friday. The Islanders are 3-1 in league play.

“Like Tyler Poirier said last week, we’ve got to put this game behind us, put our heads down and keep working towards the next win,” Lague said. “This is a great win obviously, but it’s on to the next opponent.”