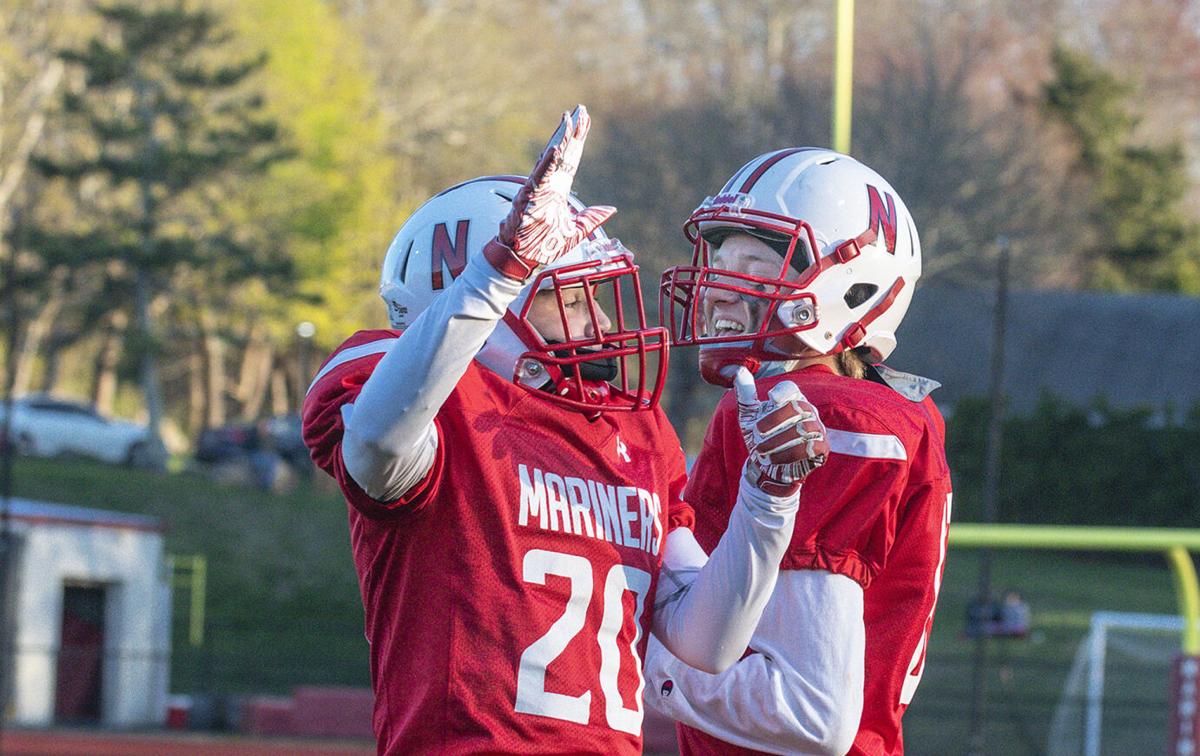 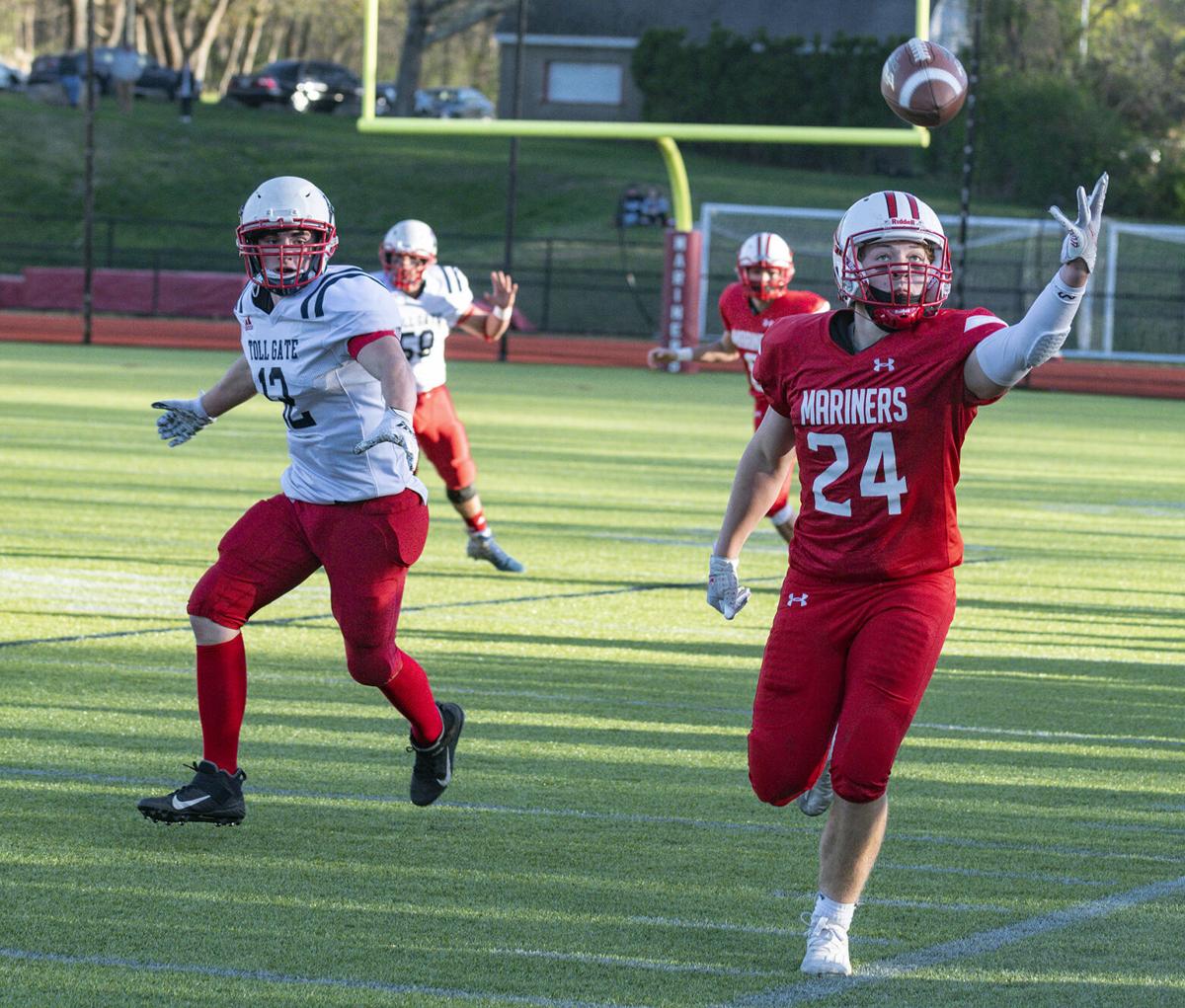 Narragansett's Reider Fry tries to pull in a catch during Friday's game against Toll Gate at Narragansett High School. 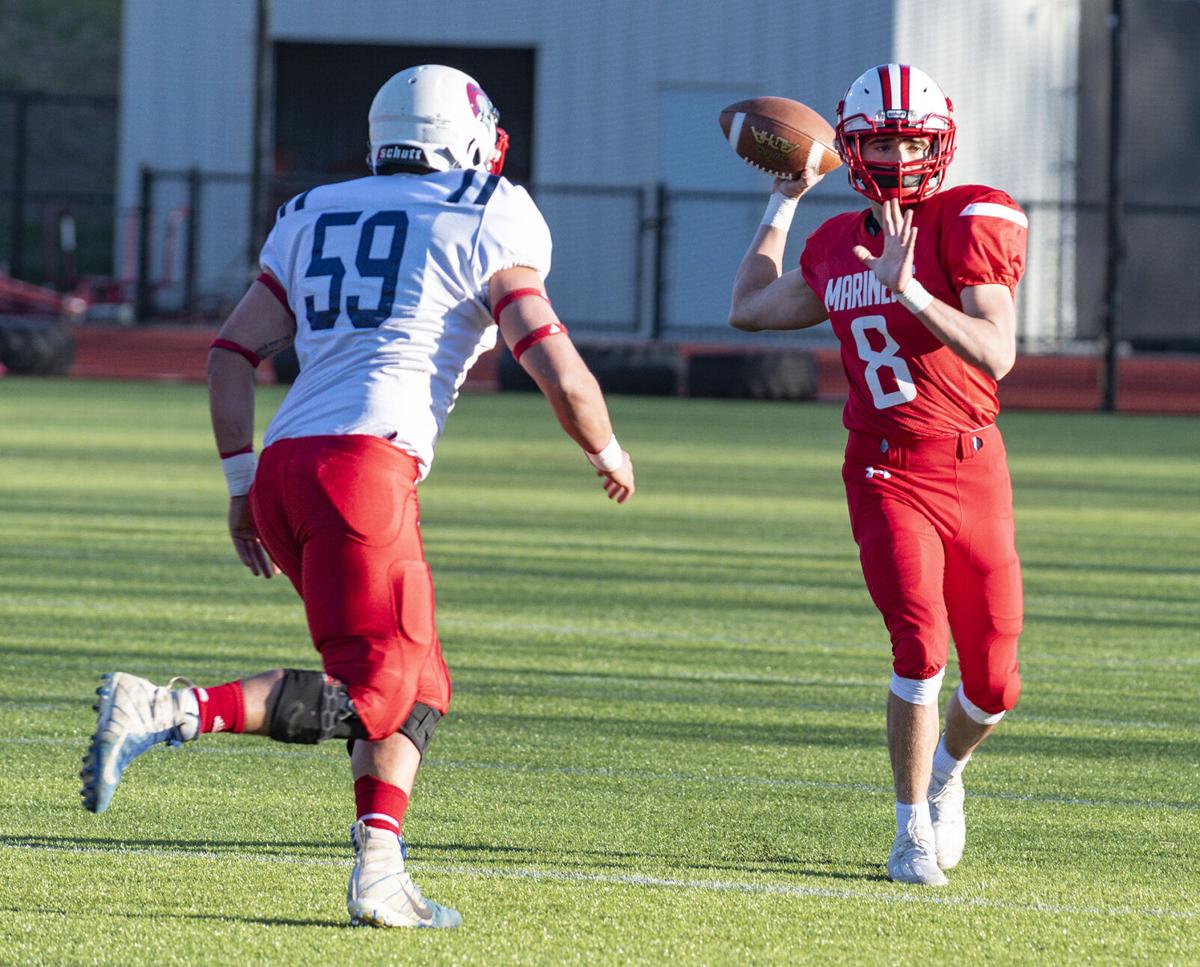 Narragansett's Reider Fry tries to pull in a catch during Friday's game against Toll Gate at Narragansett High School.

With a 31-14 win over Toll Gate on Friday night, the Narragansett High School football team earned the program’s first trip to the championship round since 2005. Top-seeded Ponaganset awaits in the Division IV Super Bowl, set for Sunday at 3 p.m., at Cranston Stadium.

“We had a lot of struggles the past couple of years,” said senior captain Sam Duckworth. “Last year, we had a good season. It wasn’t good enough. This season, we’re rolling but we’ve still got one more. It’s been a while since a Narragansett football team has been in the championship. It really means a lot.”

The Mariners have been frequent contenders over the years, but their last six playoff appearances ended short of Super Bowl weekend. Most recently, they lost in the D-III semifinals to Pilgrim in the fall of 2019.

For this spring season, the Mariners moved to D-IV, home for many of the program’s best years, and they’ve delivered another one for the record books. It was a perfect regular season, and now the ride continues.

“It’s huge,” head coach Matt Blessing said. “Our big slogan is we not me – understanding that your parents, your teachers, all the people who helped you get to this point. I’ve been blessed to have great coaches with me. It doesn’t just happen.”

It certainly wasn’t automatic on Friday. The Mariners handled Toll Gate with little trouble in the regular season, building a four-touchdown lead in a 28-6 victory. Two weeks later, the Titans took a different tack defensively and leaned on standout quarterback Grayson Pasquina to take a 6-0 lead. Narragansett went in front in the first half but led by just one point at halftime. A strong defensive effort kept the Titans off the board in the second half and the Mariners pulled away.

“We got punched in the face but that’s heart,” Duckworth said. “We fought back. They didn’t score in the second half. We never gave up.”

A 5-yard touchdown run by Pasquina finished off an impressive opening drive by the Titans, who found themselves with the lead just over three minutes into the game. Narragansett went nowhere on its first drive but got on the board thanks to a bad snap on a Toll Gate punt that led to a safety.

On Narragansett’s next series, a holding penalty wiped out a touchdown and led to a turnover on downs, but an explosion was brewing. Narragansett quickly got the ball back on an interception by Peanut Chaloux. On the next play, Phil Theroux found Brady Butler on a screen pass, and Butler rambled 34 yards for a touchdown.

Toll Gate fumbled the ensuing kickoff and Ethan Betts recovered it. Tyler Poirier made an acrobatic catch of a Theroux pass for 39 yards on the next play, before Reider Fry hauled in a 6-yard touchdown pass for Narragansett’s second touchdown in less than a minute of game time.

Toll Gate’s defense stiffened for the rest of the first half, applying pressure up front and picking off Theroux on each of Narragansett’s next two possessions. The second interception was returned for a touchdown by Joseph Pankowicz. A successful two-point conversion cut Narragansett’s lead to one at 15-14.

“I’ve got to take my hat off to them. They did a great job preparing for us,” Blessing said. “They threw a lot of pressure at us in the passing game, which we haven’t really seen. Last time, they kind of sat back and dropped everybody. They had a different scheme tonight and they played well.”

Zachary DeCorpo intercepted Theroux on Narragansett’s opening possession of the second half, setting the Titans up in Mariner territory. They quickly drove into the red zone before one of the biggest plays of the night was delivered by the Mariners. On fourth down at the 16-yard line, Pasquina hit DeCorpo on a slant at the goal line. It looked like he would find the end zone, but instead Poirier stripped the ball before DeCorpo reached the end zone and pounced on the loose ball .

“I didn’t even know it was fourth down. I was just like, ‘I can’t let them score,’” Poirier said. “I knew it was a big play for them. It would have been huge if they scored – it would turn the game right around. I just had to do something big.”

“He’s just a heck of a player,” Blessing said of Poirier. “He’s an all-state caliber athlete. He makes catches he shouldn’t make. Defensively, making a play like that. The headiness to strip that ball out when they were going in. That could have changed the ball game.”

Poirier wasn’t done. After a Narragansett punt, he intercepted Pasquina to set his team up at the Toll Gate 20-yard line. Four plays later, Fry rumbled in from 7 yards out for a 22-14 lead.

The defensive highlights continued as Duckworth sacked Pasquina in the end zone for a safety that made it 24-14. Butler put the finishing touches on the win with a 42-yard touchdown run in the fourth quarter.

The Mariner defense continued to keep Toll Gate off the board for a second-half shutout.

“Early, we were long striding everything, trying to come in flying,” Blessing said. “With an athlete like Grayson, he was just making them miss. We said, ‘Hey, you’ve got to play technique sound, you’ve got to break down and make those tackles.’ That was the difference in the second half. We were able to contain him.”

Narragansett is in the Super Bowl for the first time since a runner-up finish in 2005. A championship would be the program’s first since 2003 and its sixth overall.

Limited amounts of general admission tickets were available as of Wednesday but should be purchased in advance at gofan.co/app/school/RIIL.