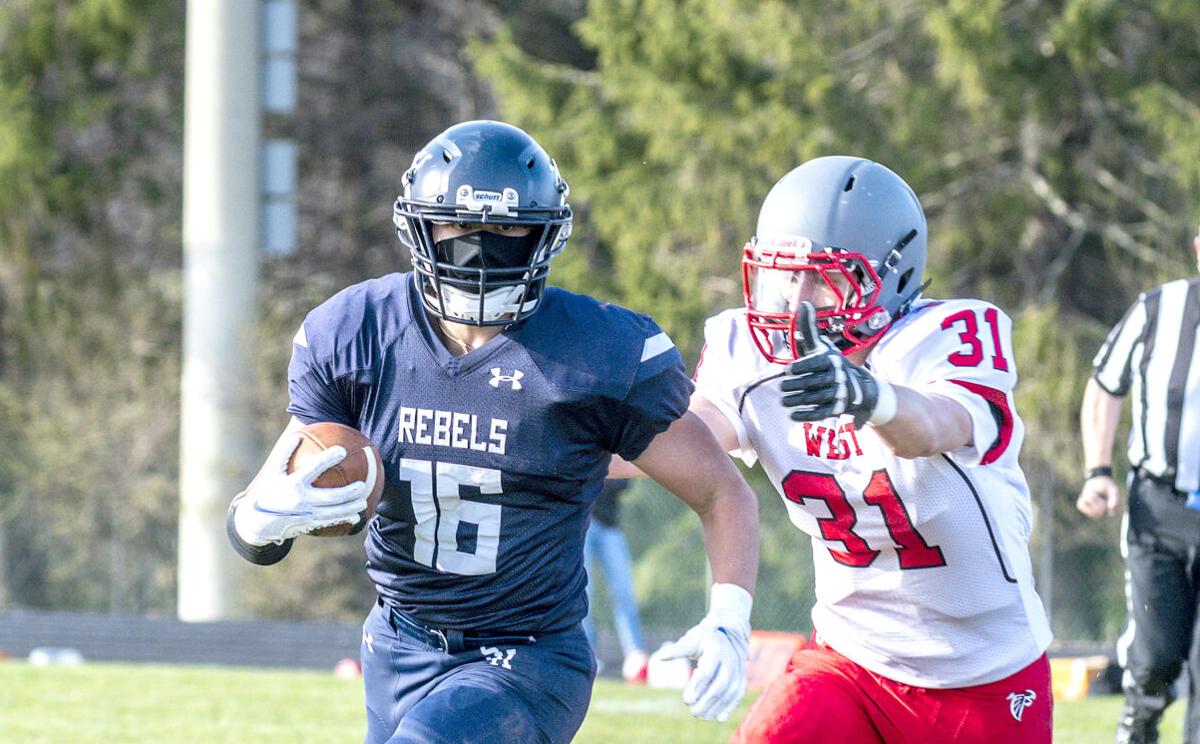 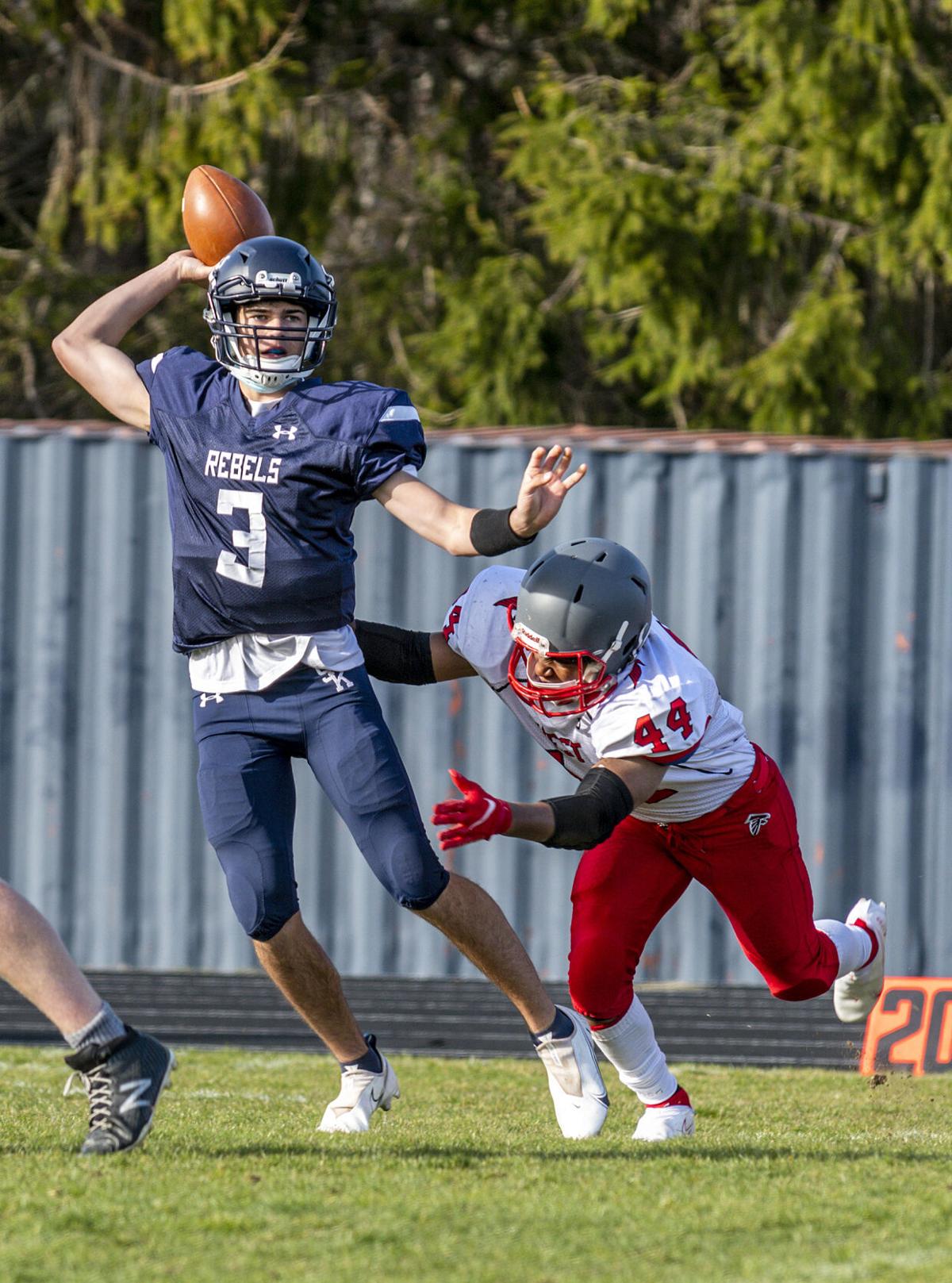 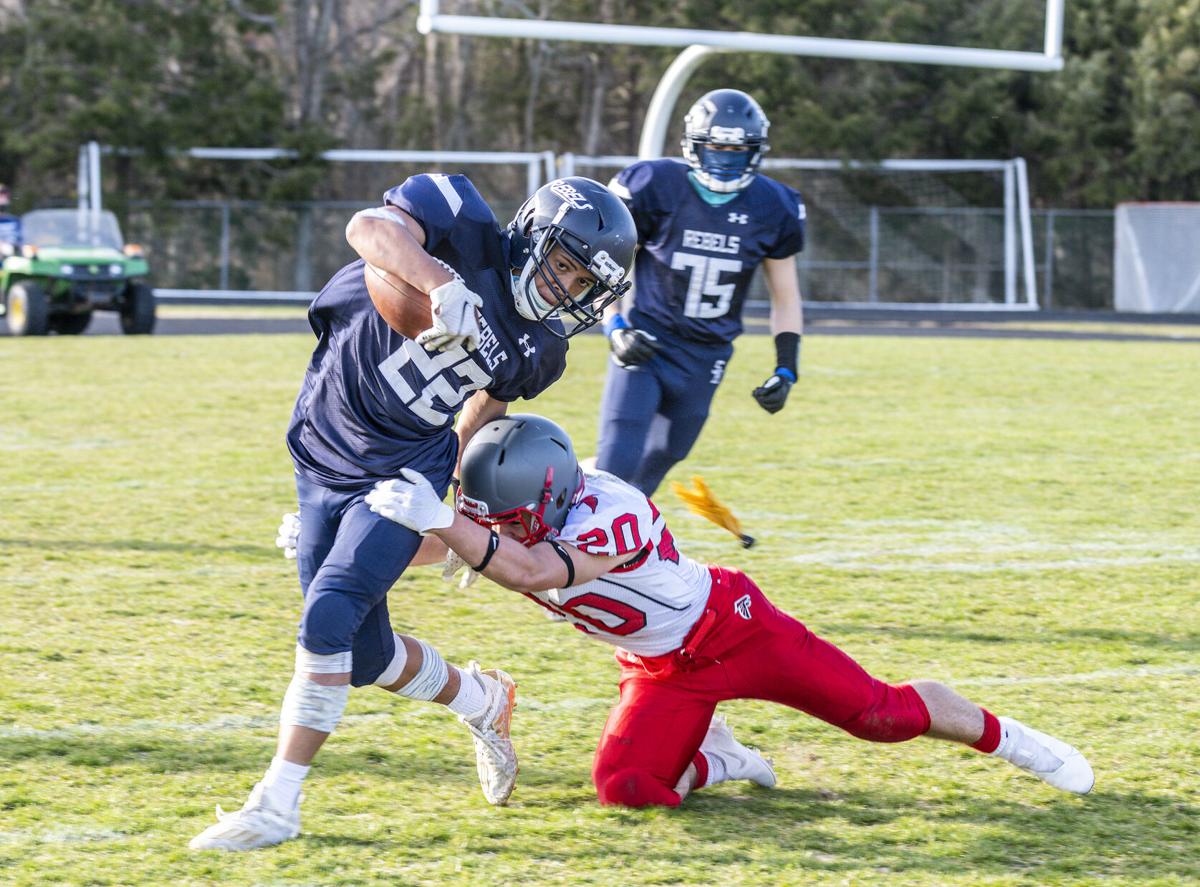 SOUTH KINGSTOWN — There was something to build on in week one, and the South Kingstown High School football team has the project well underway at this point.

On the heels of a victory over Cranston East in week two, the Rebels rolled over Cranston West 21-0 on Friday night in their home opener at Curtis Corner Middle School, continuing to make good on the promise of their spring campaign.

“We talked about it freshman year, that senior year we were going to have to show out,” senior Trey Young said. “We’re doing that right now. We have a great team, great guys. We’re close chemistry-wise and we’re working hard.”

The Rebels are 2-1, joining Central and East Greenwich at the top of Division I-B. They’ll play those teams in the final two weeks of the regular season, and their success the past two weeks has set up those games as key matchups.

“It feels amazing, but we’ve got to get back to practice for the big ones the next couple of weeks,” junior Ryan Hazard said.

With more experience and increased depth, the Rebels hoped to be in this position but had to be wondering when they fell behind North Kingstown 41-0 in the season opener. They rallied with four unanswered touchdowns and have continued the positive trends since.

“We saw the first half and we knew we just weren’t ready to go,” Young said of the North Kingstown matchup. “We were sloppy. The second half, we kind of picked it up. We definitely built off that against Cranston East and kept it going into this week.”

The Rebels weren’t at full strength against Cranston West, most notable with running back Rory Hazard limited to a few snaps on defense and no time on offense due to an ankle injury suffered the week before, when he ran for four touchdowns. The rest of the South Kingstown offense did enough to pick up the slack and didn’t need to do too much thanks to a strong defensive effort. The Falcons were kept off the board and never advanced the ball further than South Kingstown’s 22-yard line. The Rebels forced three turnovers, including a pair of interceptions by Young.

“We really got after it, especially on the defensive side,” South Kingstown head coach Gerry Zannella said. “We played very, very well last week against Cranston East. We were a little dinged up. We’re trying to move some puzzle pieces and take care of some of the injuries. It took us out of what we wanted to do, so we had to do some other things. But the boys played hard, and we played very well defensively.”

The Rebels fell just short of the end zone on their first drive but immediately went back to work, scoring with 3:37 left in the first quarter on a 23-yard touchdown pass from Cameron Holland to Chris Nhem. Ben Conover’s extra point made it 7-0.

Young stopped a promising Cranston West drive with an interception before the teams traded punts. The Falcons’ punt was picture-perfect, pinning the Rebels at their own 1-yard line. Four solid runs by Young gave the Rebels some room, but they soon faced third-and-10 at their own 13-yard line.

That’s when they delivered a play that will go down as one of the season’s highlights. Holland found Ryan Hazard on a screen pass. The full-time defensive lineman and sometimes fullback plowed through a defender then streaked down the sideline with surprising speed, going 87 yards for a score.

“As I caught it, I thought the kid was going to deflect it but I felt it hit my hands,” Hazard said. “I turned. I saw three defenders and I was like, ‘Alright, I’m picking you. I’m hitting you.’ As soon as I broke that tackle, I just saw straight daylight and I was gone.”

Older brother Rory topped the highlight reels a week prior, but his not-so-little brother got his due with the touchdown.

“People look at Ryan and see his size and his strength,” Zannella said. “But I get a chance to watch him every day and his agility for such a big man is really impressive. He’s just a big, strong guy. In his head, he’s not that blocking back. He can do things with the ball in his hands. He’s big, he’s strong and he’s explosive.”

The 14-0 lead held for most of the second half. Hazard put the finishing touches on the win with a 6-yard touchdown run in the fourth quarter. Young’s second interception of the night sealed the shutout for the Rebel defense.

“There are some things we definitely need to work on,” Zannella said. “This year, we do have some depth. We’re in a better situation, but we have to continue to work to improve. And we have to execute better in the next two weeks than we did today.”

The Rebels will travel to Conley Stadium in Providence to take on Central Saturday at 1 p.m.