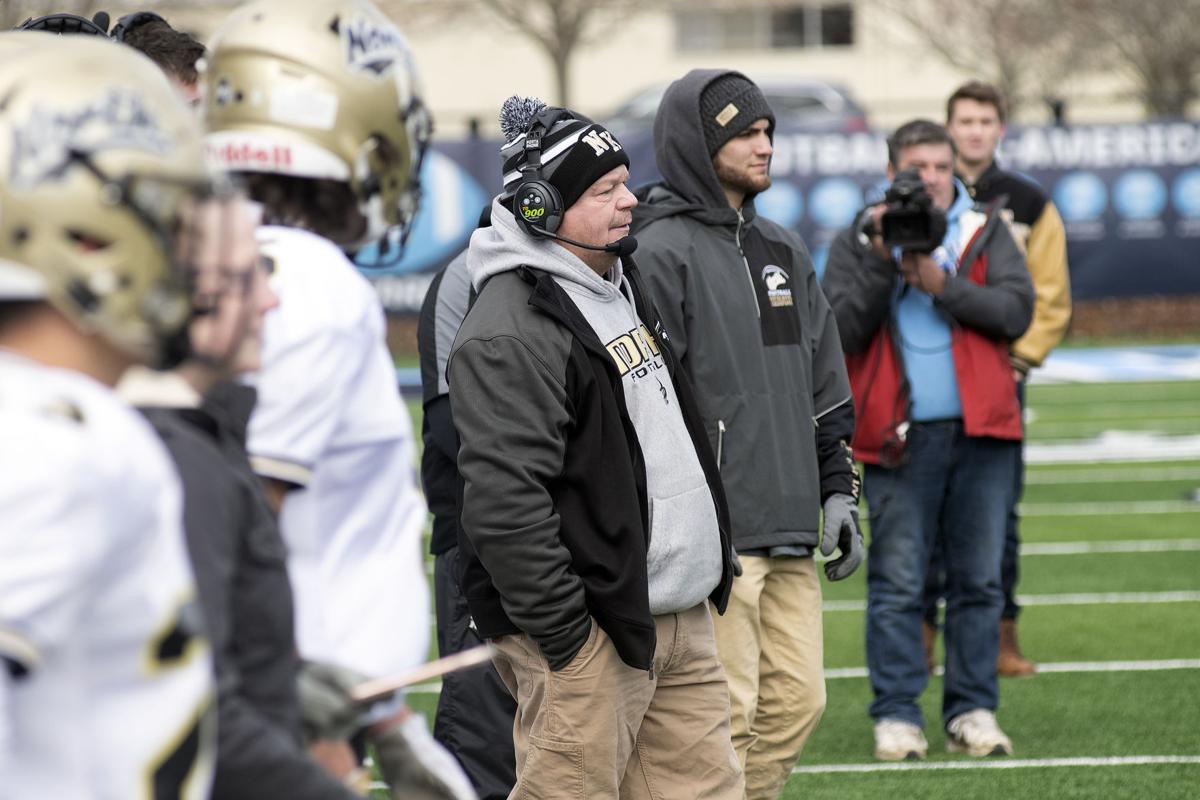 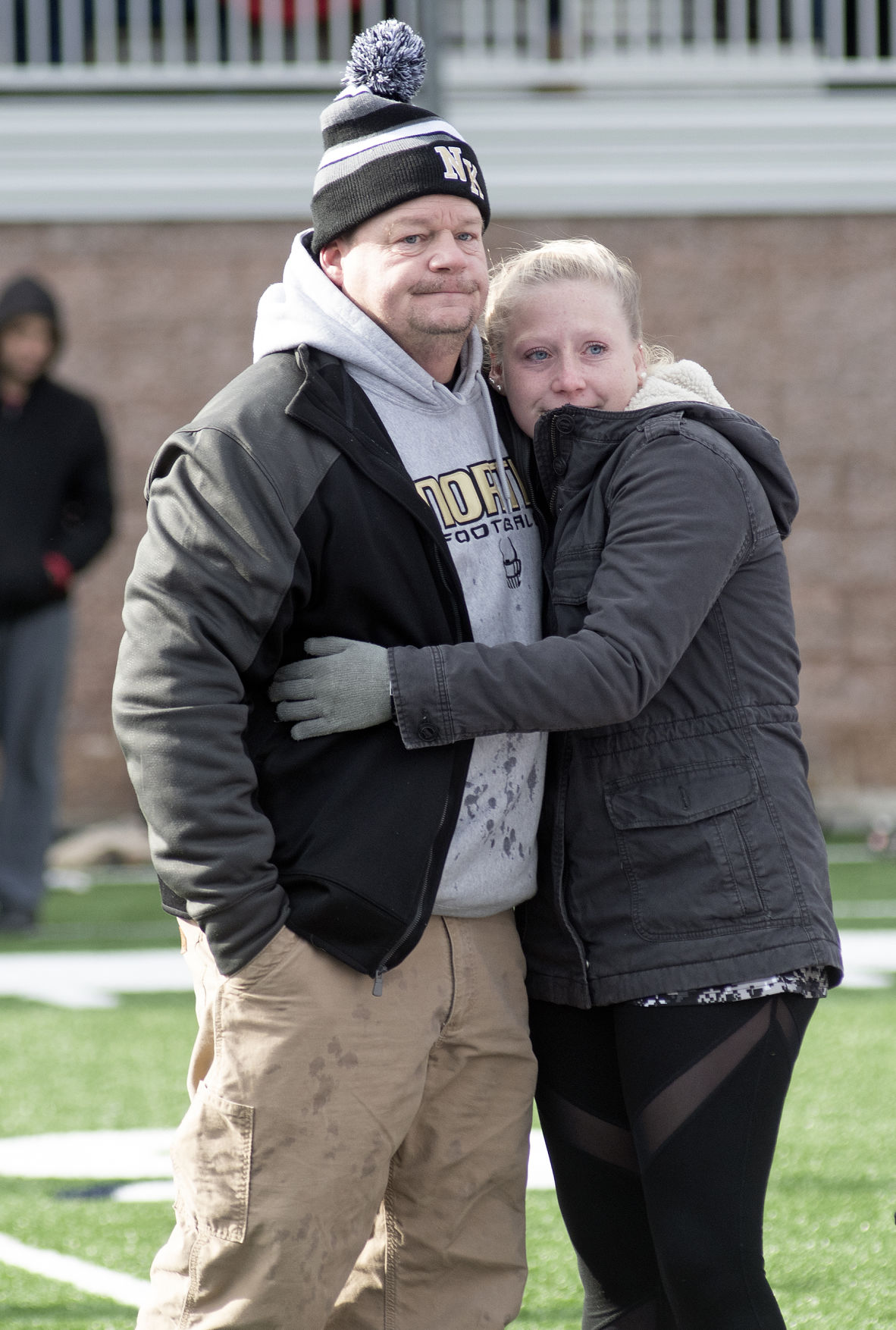 North Kingstown head coach Joe Gilmartin gets a hug from his daughter, Theresa, at the end of the Thanksgiving Day game against South Kingstown at Meade Stadium. It was his final game as head coach.

North Kingstown head coach Joe Gilmartin gets a hug from his daughter, Theresa, at the end of the Thanksgiving Day game against South Kingstown at Meade Stadium. It was his final game as head coach.

It lasted about 30 seconds.

Reflection was left to everyone else, and there was a lot to talk about. Gilmartin’s time with the Skippers will always hold a prominent place in the school’s sports history. He was the head coach for eight years after a previous stint as an assistant and after playing for the Skippers. When he took over the program, it had fallen on hard times. From 2009 to 2011, North Kingstown didn’t win a game. In Gilmartin’s first year at the helm, they won on Thanksgiving over South Kingstown and the turnaround had its spark. Steady improvement eventually blossomed into dominance the last three years, with the Skippers winning three Super Bowls and losing just two games.

“It’s indescribable,” quarterback James Osmanski said. “He’s such a great coach. He coaches us so well, but it’s not just on the field. He’s the most supportive guy. You couldn’t ask for a better coach.”

The culture Gilmartin and his staff fostered paved the way for much of the success. The foundation of it was hard work, and it came from the top down.

“He’s absolutely the hardest-working guy in the room,” assistant coach Bill Piva said. “He’s the first one to get there, last one to leave.”

Piva remembers running into Gilmartin at the 2011 Thanksgiving game, the year before he took over. The two had played together for the Skippers. Gilmartin said he was considering taking the job if it came open, and he wanted Piva to join him as an assistant coach. Even then, there was a vision.

“He hired four guys with varying football experience, but none with a day of coaching experience,” Piva said. “I remember saying, ‘Are you sure you want to do this? Because none of us can help you.’ He said, ‘I’ve got a plan. You’re good guys, you’re all hard workers, you all love kids.’ He had that vision, he had a plan and he put it together.”

The hints of success were capitalized on, as a strong core of players grew to include athletes who might have previously been reluctant to play football. Now, the program boasts one of the largest rosters in the state. Even as the numbers grew, though, the family atmosphere persisted.

“I don’t know that [the culture] is behind the scenes,” Gilmartin said. “That’s really the first main objective.”

“We took steps,” Piva said. “We didn’t sit down in year one and say, ‘Super Bowls are around the corner.’ It was about changing the culture.”

For Gilmartin, family wasn’t just a buzzword. Sons Joe and Ben played for him and daughter Theresa was a constant presence on the sidelines. Time away from them had been a concern of his when he was considering taking the job.

“It was a real difficult decision when I took the job eight years ago because I wasn’t going to spend enough time with my kids,” Gilmartin said. “Because they all came through the high school, it ended up being a great decision because I spent more time with them when they were in school.”

Joe and Ben both enjoyed their time playing for their dad, though it wasn’t easy.

“He’s a little hard on me, but at the end of the day, I know he loves me,” said Ben, a senior linebacker and running back on this year’s team.

The impact was lasting for Joe, now a sophomore fullback at Worcester Polytechnic Institute.

“Practicing, people sometimes don’t take it as seriously,” he said. “In high school, we took practice super seriously. And we took attending things super seriously, getting every place early and making sure you’re attentive. That’s what I really took from here. I took it into school work as well, and just into everything. Not even just in football, but in life – it’s carried over.”

Judging by the sideline reunion, many former players felt the same way. Gilmartin shook hands with all of them after the game, soaking in one of the best parts of the job.

“That’s what you do it for,” Gilmartin said. “Winning’s great. It motivates you. But ultimately, it’s the generations of kids. There are a bunch of kids in that group whose dads I coached. Two years ago, we had five kids whose dads I coached and that’s really cool.”

Gilmartin always knew these would be his final scenes, doing the math when he took the job on when Ben’s senior year would come. Even as the Skippers turned into a juggernaut, Gilmartin wasn’t tempted to stick around.

“I’m tired. It takes a lot out of me. It’s a grind. It’s a long, long grind,” Gilmartin said. “I think what’s different for other coaches – and I’ve talked to a lot of them about retirement – is that football is the only thing. For me, it’s not the only thing.”

Gilmartin will keep tabs on the Skippers next season. Piva will depart along with him, though other members of the staff may stick around. There’s a chance assistant coach Fran Dempsey, who’s been groomed for the top job, will take over.

“We’ve got a lot of really good pieces still there. It’s difficult to continue to push the needle forward but I think there are things these kids can do. You can get a little bit better percentage in the weight room through the winter, and those kinds of things,” Gilmartin said. “I’ll try and get out of the way. The last thing you want to be is in the way. Fran has some great ideas, hopefully he’s able to continue on and maybe move into a different role. And if that doesn’t work, hopefully they’ll get somebody who can keep the thing rolling along.”

Gilmartin and original members of his staff from the first season posed for a photo amid the postgame goodbyes on Thursday, recreating a shot from the Thanksgiving win in 2012. There were also family photos and hugs with players and alumni.

The moment had finally come, even if it seemed like it never would. In the fourth quarter of the game, with his team leading 27-8, Gilmartin took a timeout, angry about something that maybe only he noticed.

That was more fitting than the spotlight.

“Man, he was yelling at the last practice,” Piva said with a laugh. “The Wednesday practice before Thanksgiving, he’s getting after people.”