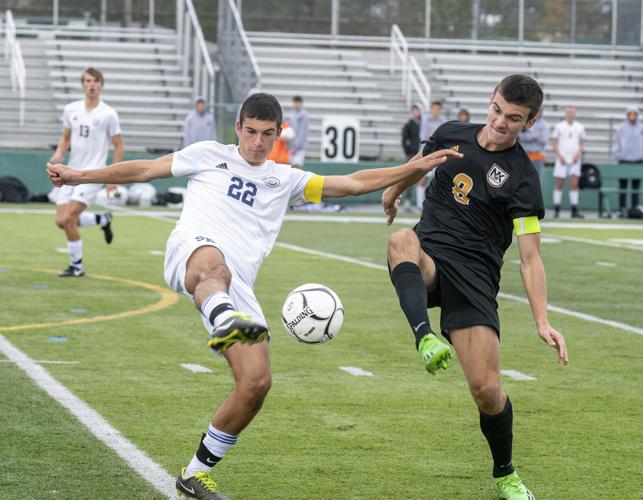 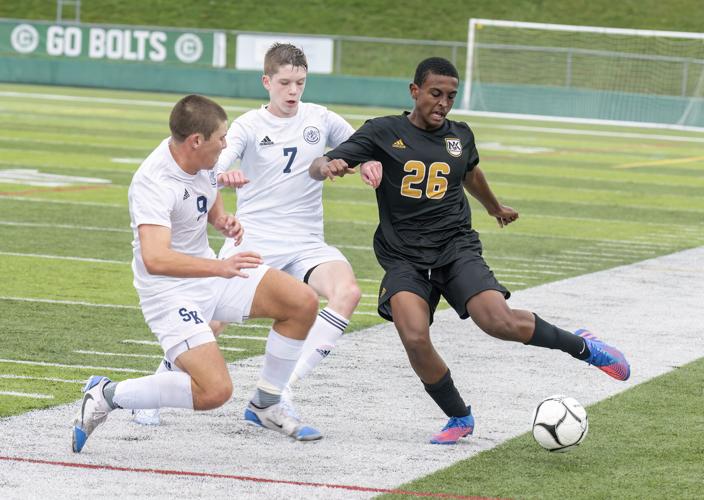 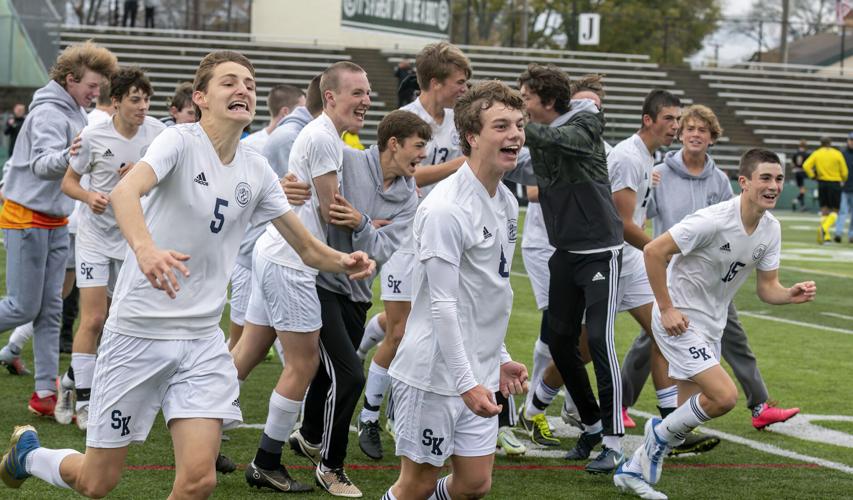 South Kingstown players run to the stands to celebrate with friends and family after winning Sunday's championship game against North Kingstown at Cranston Stadium.

South Kingstown players run to the stands to celebrate with friends and family after winning Sunday's championship game against North Kingstown at Cranston Stadium.

CRANSTON — It was the hardest possible path to a championship. The perennial powerhouse and defending champion in the semifinals. The bitter rival and unbeaten top seed in the finals.

Hardest, but also the best?

The hard way just made the victories that much sweeter.

After a stirring 5-1 win over La Salle sent the Rebels to the state finals, they kept the pedal down and beat top-seeded North Kingstown 3-1 on Saturday at Cranston Stadium to claim their second state championship in three years.

“When we won two years ago, it had been like 25 years,” South Kingstown senior Dan Banks said. “We were always there at the end. To be able to finish it twice in three years is huge.”

North Kingstown was trying to cap an undefeated season with its first championship since 2014. The Skippers boasted a high-flying attack powered by some of the state’s top players, and they delivered a memorable year. But the Rebels denied them a finishing touch.

“They have a lot of good players up front. All the goals they scored, it can be a little intimidating,” South Kingstown senior Tom Leonard said. “But we came into the game with a plan and a system. We felt really confident. In the regular season, we held them scoreless for 70 minutes. We had a lot of confidence coming into the game. We just had to execute.”

On paper, North’s regular season matchup with South Kingstown – which came in the season finale – looked like just another big win for an unbeaten team. The Skippers prevailed 4-0. But all the goals were scored in the final 10 minutes as the game slipped away from the Rebels.

South Kingstown took confidence from that game and added some serious momentum with a dominant showing against La Salle in the semifinals.

“It was electric,” South Kingstown goalkeeper Fisher Nadeau said. “Give all the credit to the boys. We had a plan. They beat us 4-0 in the regular season. We just used that to drive us to get the win.”

The title match ended up being similar to the semifinal surge. Cody Granville staked the Rebels to a 1-0 lead in the 12th minute of action, finding space in the box and hammering a shot into the net. Nine minutes later, a free kick by the Rebels was popped away by North goalie Ethan Ford, but the rebound came out to Leo Johnson by the top left corner of the box. The defender sent a shot right back in and got it past Ford for a stunning 2-0 lead.

“That’s been a point for us this year,” Granville said. “We always want to score the first goal. I don’t think we’ve lost when we’ve scored the first goal.”

South’s veteran defensive unit clamped down on the Skippers and sent the Rebels to halftime with the same cushion.

North Kingstown made its move early in the second half, when Froberg fired a shot from the right wing. Goba punched in the rebound to make it a 2-1 game in the 44th minute. Soon after, the Skippers had a golden opportunity to pull even when a failed clear left Matewos Ashenafi with the ball right in front of the net. Nadeau made the point-blank save.

“Huge,” Armstrong said. “Fisher in my opinion is the best goalkeeper in the state. You don’t see him all the time, but all of a sudden, he’ll come up with that save. Our back line will win 20 headers in a row. The one that they don’t head, Fisher saves us. He doesn’t have many saves because we have such a good defensive unit. When he’s had to make two or three a game, they’re always spectacular.”

On the ensuing counter-attack, Luca Prodigio blasted home a shot from 20 yards out to put the Rebels in full control.

“I just saw him coming in and knew I had to come up with a big stop for the boys,” Nadeau said. “And they went down and scored.”

“We felt like we should dominate the first 20 or 30 minutes based on our pressing and our sprints and our fitness level,” Armstrong said. “Let’s make sure we get a goal during those first 20 or 30 minutes. At halftime, I said they were going to make a change and they did. They scored an early one. I had told them, if one gets in, we need to keep playing the same energy and get another one.”

North Kingstown kept pushing but couldn’t find the net again, as South Kingstown nursed the 3-1 lead to the finish line – and to a wild celebration.

“It’s unreal,” Nadeau said. “Couple of ties and losses early on, but we stuck with it. We got it done. Big credit to the coaches. It’s unbelievable.”

Defenders Leonard, Johnson, Jeff Burns and Derek Moffatt did what they’ve done throughout the season. While there were bumps early on, the foundation was evident in the fact that South Kingstown didn’t allow a goal in its first five games of the season. That group continued to be the backbone in the title game.

“I think our back line set the tone today,” Armstrong said.

Goals were sometimes harder to come by for the Rebels, but not in the postseason. They scored 12 goals across three games.

“In these games, everything comes down to our system, our shape and our preparation,” Armstrong said. “After that, you need that personality and that heart. We talked about how our SK logo means so much to us. We called this the culture game. The preparation we do, the recovery we do, the film, the whiteboard sessions and if you look at our bench, everybody is up and cheering us on. That’s our culture. This is SK soccer.”

The loss marked the end of some great careers for North Kingstown seniors. Froberg, Goba and Chase Zorner earned all-tournament honors. In the last two years for that trio and the rest of the seniors, the Skippers went 26-2-1 in regular season action and had two runner-up finishes. This year’s campaign was the program’s first undefeated regular season since 2007 and the first ever with zero losses and zero ties.

It could have been a remarkably smooth ride to the title for the Skippers. It was more of a winding road for the Rebels, but they were happy to be on it.

“We didn’t have any big wins in the regular season,” Armstrong said. “We just wanted to make the boys know they needed to peak at the right time, and they surely did. They proved to everybody in the state that we’re the best team.”

They knew they could be all along.

“This was definitely possible,” Granville said. “After those early ties and losses, this is exactly what we talked about. We asked each other, ‘Where do you want to be at the end of the year?’ And every single person said here. We knew what we wanted, we had a goal and we all showed for it.”

Should school committees and town councils be required to appoint the top vote-getters of an election to leadership roles?

Following a fairly tame election season (By local standards), the Narragansett and South Kingstown Town Councils got off to a rocky start last week as top vote-getters Susan Cicilline Buonanno and Deborah Bergner were each passed over for roles as their respective town's Council Presidents following controversial votes in the first meetings of both boards. The moves have sparked a local debate over the "tradition" of appointing the top vote getter of an election to the role of Town Council President, with supporters arguing such a move should be mandated as an indication of the will of local voters. Opponents argue the perhaps informal tradition is not a requirement by either town's charter and, as such, should be left for each individual body of government to decide amongst itself. Should school committees and town councils be required to appoint the top vote-getters of an election to leadership roles? Why or why not? Let us know in this week's poll question below.