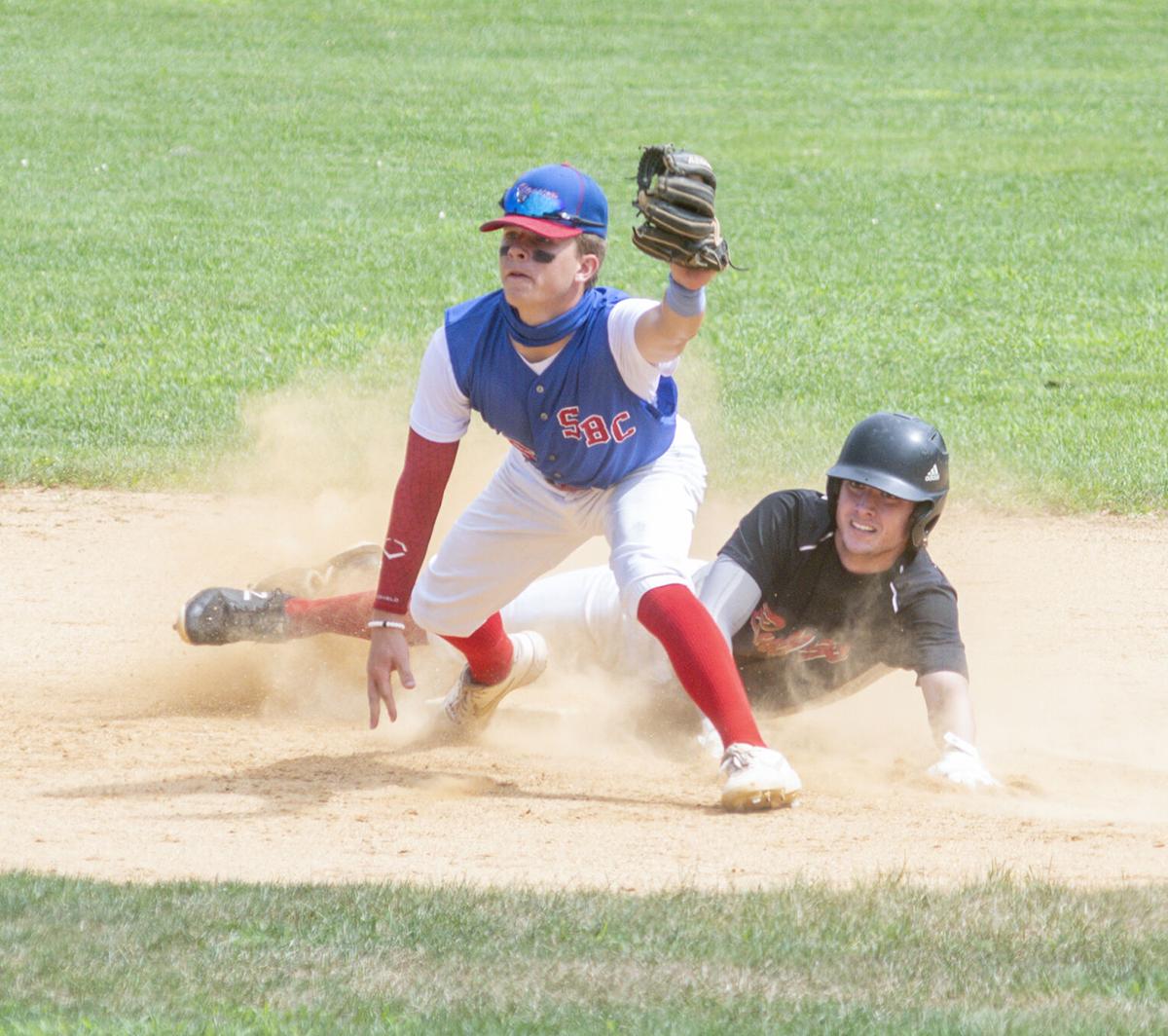 Slocum's Justin McCarthy looks for the call after tagging out a runner at second base during Saturday's game at Lischio Field. 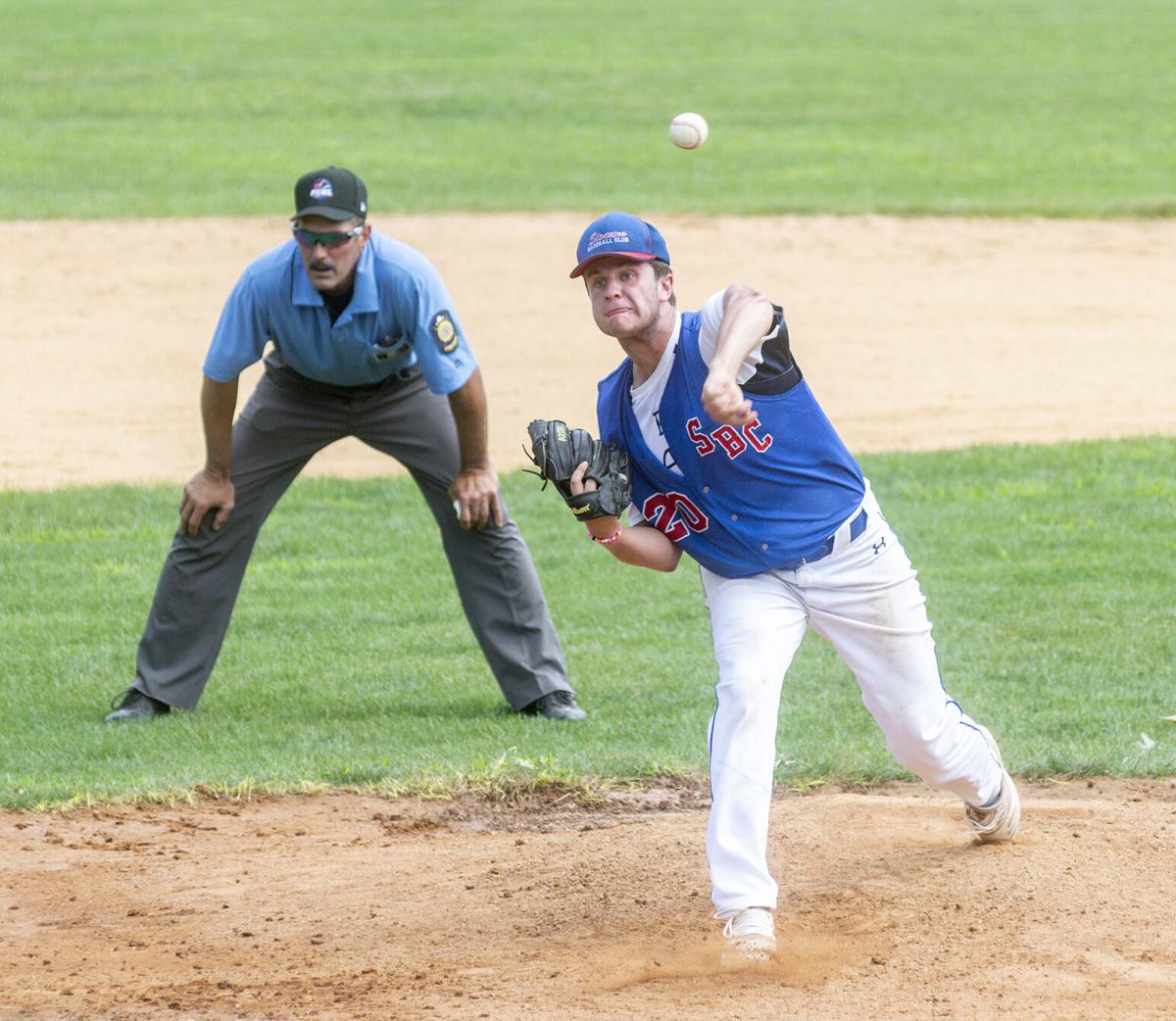 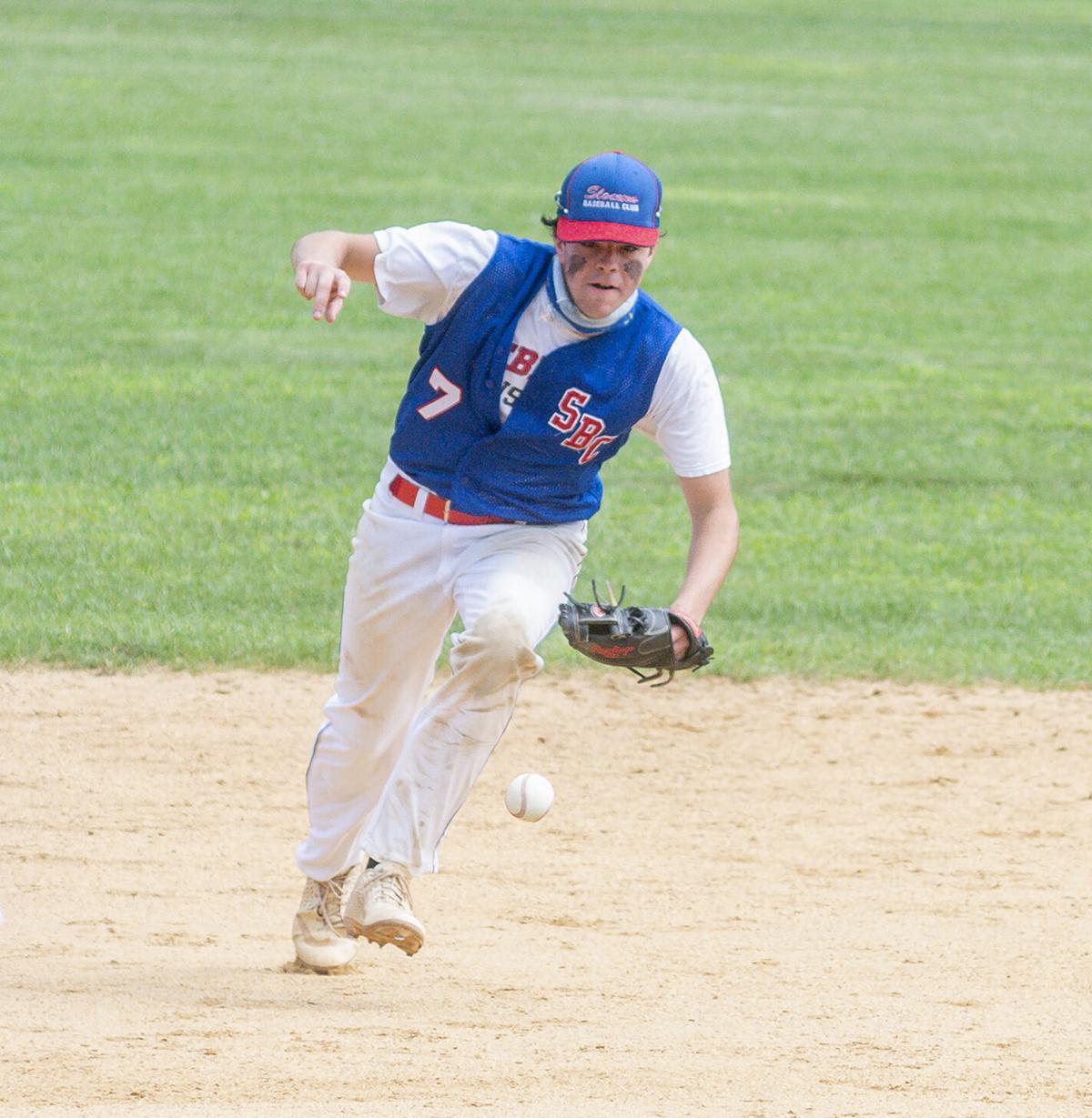 Slocum's Justin McCarthy looks for the call after tagging out a runner at second base during Saturday's game at Lischio Field.

NORTH KINGSTOWN — The Slocum Baseball Club thought a win over a strong Cranston team in the finale of an up-and-down regular season was a sign of things to come for the Rhode Island Connie Mack playoffs.

They were exactly right.

After a sweep of Tiverton in the opening round, sixth-seeded Slocum upset No. 3 Cranston with a quarterfinal sweep, rolling into the semifinals on a five-game win streak.

“We’re definitely playing our best baseball down the stretch, which is always what you want,” catcher Brendan Kearns said. “Honestly, we’re just a bunch of guys who love playing baseball. The energy we bring to the field every day, I think that’s why we’re rolling right now.”

Slocum will face No. 2 Chariho in a best-of-three semifinal series beginning Friday, after a rainout Thursday. Game one is set for Friday at 5:30 p.m. at Lischio Field. Game two will be Saturday at 10 a.m. at Sprague Park in Narragansett.

A playoff run always seemed possible for this group, which brought experience, talent and a little more hunger than usual to the field this summer. The results didn’t always reflect that, with the team losing its opener, winning three straight, then alternating wins and losses the rest of the way. Slocum ended up missing out on a bye through the preliminary round of the playoffs.

“Regular season for us, it’s developing these guys for next year,” assistant coach John Slattery said. “They come in and we get them out a level up hopefully. That’s the regular season. Then when we hit the playoffs, we’re playing.”

And in the end, a little extra baseball may have just created more momentum. Slocum edged Tiverton 2-1 on Aug. 3. After a rainout the next day, it rolled to a 5-0 victory and the sweep.

That set up the quarterfinal tilt with Cranston, less than a week after Slocum’s win in the regular season finale. The first game of the series followed a familiar script, with strong pitching for both teams. Noah Quarella went five innings for Slocum and was armed with a 2-0 lead. After Cranston tied the score, Slocum reliever Braeden Perry escaped a jam in the sixth and Wyatt Daft broke the tie with an RBI single in the top of the seventh. Perry then struck out the side in the bottom of the seventh to secure the victory for Slocum.

Game two was true deja vu, with Slocum sending Owen Caldwell to the mound against Cranston’s Kyle Palardy on a bright Saturday morning at Lischio Field, the exact same scenario that had played out a week earlier in the regular season meeting. Caldwell won that first duel, striking out 11 in a complete-game shutout as Slocum won 4-0.

In the rematch, Palardy was terrific, allowing just one run on four hits, but Caldwell continued his mastery. He took a no-hitter into the fifth, struck out eight and tossed another shutout as Slocum prevailed 1-0.

“Owen’s our big dog,” Kearns said. “He has a lot of talent. He’s got intensity on the mound and for him, it’s confidence. He doesn’t care who’s up. They had a lot of good hitters on that team. He just does his thing, paints the corners, comes at kids. Honestly, I think he knows when he steps on the field, he’s the best player out there.”

Caldwell helped himself get the 1-0 lead. With two outs in the second inning, he cracked a double to deep left field. Henry Hersum then chopped a single through the left side of the infield to plate pinch-runner Danny McNeil with the game’s only run.

There were some tense moments for Slocum as Caldwell set out to protect the lead. The biggest threat came in the fourth. Caldwell still had his no-hitter going but a pair of walks and a groundout put runners in scoring position. With two outs, a pitch to Gian Messina got away and John Nardolillo tried scoring from third. Kearns chased the ball down and flipped to Caldwell covering home. Nardolillo was called out on a close play, and the lead endured.

Messina broke up the no-hit bid in the fifth with a single, but Caldwell responded by retiring the next six batters he faced, including three straight strikeouts in the sixth inning. Nardolillo led off the seventh with a base hit, but Caldwell came back with a strikeout and a fly-out. A ground ball to shortstop led to a force at second base and sealed the win.

“These guys come together and grind out every inning,” Slattery said. “Every play, every out – give credit to them.”

The dominant pitching and flawless defense fit with the intensity that’s been on display for Slocum throughout the postseason. Between the cancellation of the spring high school season, summer uncertainty and a good mix in the dugout, the team hasn’t had to deal with any dog days of summer.

And now it’s full steam ahead.

“A lot of these guys had their high school seasons taken away, so it seems like they want it a little more,” said Kearns, who graduated from North Kingstown High School in 2019. “Sometimes, it can be a little lazy or lackadaisical in the summer, but that’s where we motivate each other and bring that intensity. I think sometimes other teams say, ‘Oh it’s just Connie Mack or it’s just summer ball.’ We fall into that sometimes, too, but we make sure to pick each other up. The camaraderie we have really motivates us. We’re blessed to be on the field right now and we’re really trying to make the most of our opportunities. It feels really good to be playing this well.”