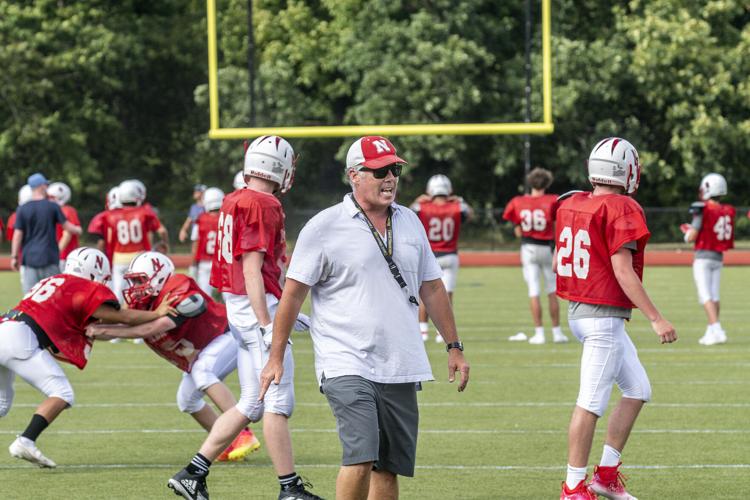 Narragansett football head coach Matt Blessing calls out instructions to his players during Tuesday's practice at the high school. 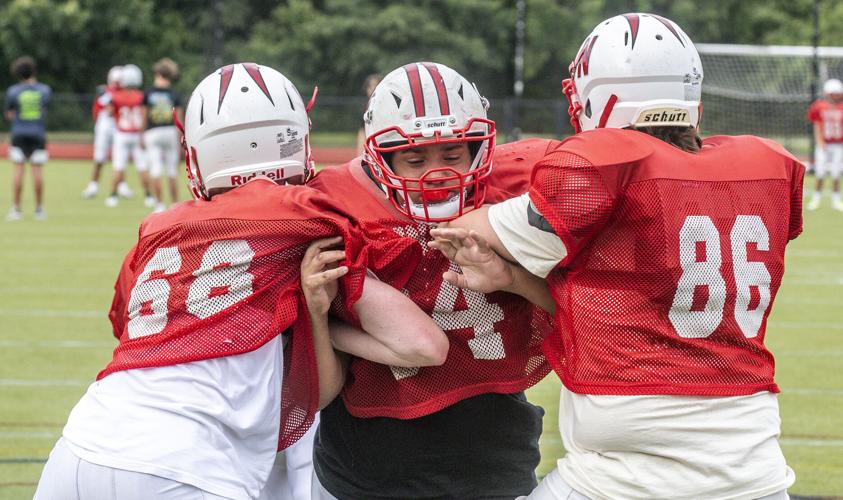 Narragansett's Darien Price tries to break through a pair of defenders during Tuesday's practice at the high school. 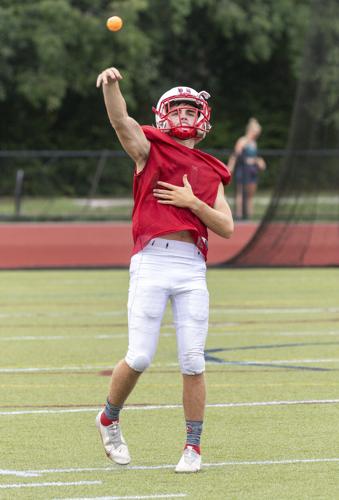 Narragansett quarterback Aidan Friedt participates in a passing drill during Tuesday's practice at the high school.

Narragansett football head coach Matt Blessing calls out instructions to his players during Tuesday's practice at the high school.

Narragansett's Darien Price tries to break through a pair of defenders during Tuesday's practice at the high school.

Narragansett quarterback Aidan Friedt participates in a passing drill during Tuesday's practice at the high school.

The latest challenge is tougher. The gaps to fill are larger.

But if the last two seasons are any indication, the Narragansett High School football team will be up for it.

The Mariners became a powerhouse in the spring of 2021, emerging from the postponed fall season with renewed vigor en route to a championship. Last fall, they moved up a division and didn’t miss a beat, winning their second consecutive Super Bowl title.

This season, in a new-look division with a lot of new faces, the Mariners are aiming to keep rolling.

“We had great leaders before us,” linebacker and lineman David Beauchemin said. “Colin Flynn, Tyler Poirier – all of us kind of learned from them and gained that leadership from them. All the young guys are stepping up. We’re just all ready. We know the challenges we’re going to face. We know the talent we lost. But we’re just ready.”

It won’t be easy. Rhode Island Interscholastic League realignment kept the Mariners in Division III, but sent some new foes their way, as part of a trickle-down effect from the move to a smaller Division I. A host of former D-I teams make up the bulk of D-II. A group of D-II teams – including reigning champion Classical – are now in D-III.

“It’s basically Division 2.5,” head coach Matt Blessing said. “It’ll be super competitive. I think we have the capability of being a playoff team. We have to stay healthy and get in a nice groove and see what we can do.”

The team that will take on the challenge has good depth and talent, but is shorter on experience than its predecessors. Graduation took the core of the Super Bowl squad and 16 players in all, including all-staters Tyler Poirier, Reider Fry and Colin Flynn and touchdown-slinging quarterback Phil Theroux.

“It’s a lot to lose – 16 kids in a senior class,” Blessing said. “We’re going to be plugging in some different guys, figuring out how it all fits together, but we’re pretty excited with what we’ve got.”

The biggest piece that’s still in the fold is senior running back and linebacker Mekhi Wilson. He missed his sophomore season with an injury and was out for a few games in the fall of 2021. When he got onto the field, he played a complementary role to Fry in the backfield and immediately topped the team’s highlight reels with dazzling runs. Now, the starring role is his, and it should allow Wilson to become one of the top players in the state.

“Mekhi looks healthy,” Blessing said. “I think we just saw a little glimpse of him last year. He’s ready to go and he’s in great shape.”

Wilson cut weight in the off-season and is feeling lighter on his feet – a scary thought for defenders who already thought he was pretty fast.

“I have very, very high hopes for myself,” Wilson said. “Ready to put on a show, honestly. I’ll be faster, better on my feet. It’s going to make a big difference. I’m already moving better, more stamina – it’s affecting my whole game honestly.”

Matt Nathaniel will join Wilson in the backfield and on defense after contributing last year. Mike Fiorillo is ready for a bigger role. The offensive line should open plenty of holes, with Beauchemin, Luke Webster, Danny Ashworth and Cobin Raitano all returning.

There may be a few more opportunities to run, given what the Mariners lost from their aerial attack. At the same time, they like the potential. Harry Lague returns to lead the receiving corps after playing a big role last year opposite Poirier. Ian McGrath had a good summer in the passing league. Chris Levesque and Christian Petrecca provide speed in the slot. Newcomer Jackson Monast is the latest multi-sport Mariner to give football a try and will play receiver and defensive back.

Under center, junior Aidan Friedt may have the inside track at the starting quarterback job, with sophomore Matt Timpson also competing.

Several of the offensive linemen will also man the defensive line, along with Darien Price and Will Perrotti. Beauchemin, Nathaniel and Wilson anchor the linebacking unit. Lague and Levesque are part of a deep secondary group.

Throughout the lineup, depth stands out. While the Mariners may not have as many stars as last year’s team did, they have more players who can contribute.

“What we have this year that we haven’t had in the past is some depth,” Blessing said. “We had guys the last few years who played both ways and rarely left the field. We have an opportunity this year to keep guys fresh and play some guys just one way, which is going to make a difference.”

With so many players ready to seize opportunities, there’s no shortage of hunger for success. The championship plaque was barely into the trophy case when returners started taking the field for player-led off-season workouts – even in the winter.

“A lot of us were out here in the winter, working in the snow,” Beauchemin said. “We’ve been going to the gym all summer. We all feel great. We have the guys and we’re ready.”

Do you believe RI will move toward tolling all vehicles now that a truck-specific policy has been deemed unconstitutional?

Last week, a federal judge ruled that Rhode Island's truck-specific tolling policy on highways across the state was unconstitutional. While the state has not yet commented on whether or not it plans to appeal the decision, longtime critics of the move toward truck tolls said the ruling was a victory. Others said they viewed the ruling as the first step toward Rhode Island lawmakers repealing a law passed at the same time as the truck toll policy that banned the tolling mechanisms for being used for individual passenger vehicles. Do you believe Rhode Island will move toward tolling all vehicles now that a truck-specific policy has been deemed unconstitutional? Why or why not? Let us know in this week's poll question below.