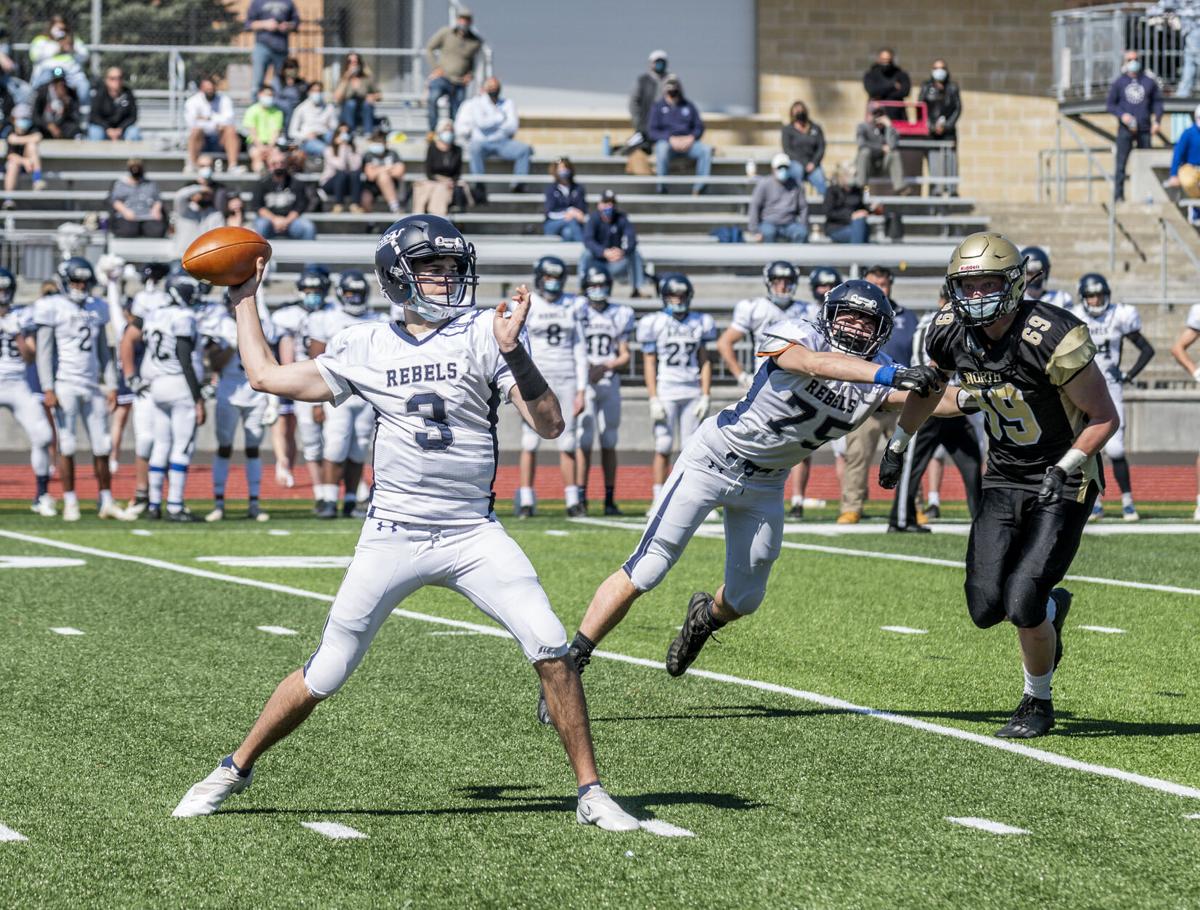 NORTH KINGSTOWN — Far from their usual Thanksgiving Day meeting, rivals North Kingstown and South Kingstown still had a lot to be grateful for on Saturday morning.

The Skippers won 41-28 in the opener of the COVID-delayed season, beginning the program’s new era with more of the same. South Kingstown scored 28 unanswered points to make things interesting and flashed more offensive firepower than it has had in several years.

And after the postponement of the football season to spring, both were thrilled to be on the field.

“It feels great to be back,” North Kingstown coach Fran Dempsey said. “We waited about a year and a half to be back on the field. Just super excited for the seniors that they got a chance to come out here. A lot of the guys took advantage of the opportunity today. They played their hearts out and had great games.”

The Skippers won for the sixth straight time against the Rebels, across four Thanksgiving meetings, one playoff matchup and now the spring debut. The rivalry streak has coincided with North Kingstown’s rise into the state’s upper echelon, and the latest win offered plenty of signs that it plans to stay there. With a host of new starters pulling the weight in Dempsey’s first game as head coach, the Skippers raced to a 41-0 lead, looking like a player in the new Power Four conference. Making his first career start, senior quarterback Donovan Carr tossed five touchdown passes.

“I was really happy with our first team,” Dempsey said. “We wanted to get out to a fast start, work on some of our quick passing game, some of our no-huddle start. Really happy with how our receivers reacted and how Donovan threw the ball. The line played well up front early on. It’s a hard game to manage. You go up early, then you’re trying to slow it down, which is really not us. But happy with the outcome.”

After falling into the early hole, South Kingstown worked its way back into the game with a performance that is fueling optimism for the rest of the season, particularly with the toughest test of the season now complete. Sophomore quarterback Cameron Holland tossed three touchdown passes and the Rebels finished with more total yards than the Skippers.

“Going forward, we showed in the second half that we can do things, that we can play,” South Kingstown coach Gerry Zanella said. “We’ll definitely show the first half film. And we’ll also show them the second half to say, ‘This is what you’re capable of.’ I give them credit. It would have been easy at 34-0, to roll over. But they played with some pride in the second half and were able to put some things together.”

The game began with a lightning strike that wasn’t. Carr hit Tyler Pezza for a 72-yard touchdown on the first play from scrimmage but it was called back due to a holding penalty. The Skippers eventually punted, but it was just a momentary detour. Three plays into their next possession, Carr and Pezza connected for a 54-yard touchdown, and the Skippers were off and running.

“I was just telling myself to stay calm and confident,” Carr said. “I think that’s what made the difference for me today. The first drive, we kind of felt it out, and then we went after it.”

A fumble on the opening kickoff of the second half gave possession to North Kingstown deep in Rebel territory, and Evan Beattie rumbled in from 5 yards out. Max Rome’s fifth extra point made it 41-0.

“We played well in the second half,” Zannella said. “It took us a half to figure out we were actually in a game. I’m a little disappointed in that - that it took us a while to figure out the real bullets were flying. We had some huge mistakes that North was able to capitalize on. They hurt us bad. When we failed to line up properly, they hurt us bad. That’s the mark of a good team.”

The Skippers would have liked to see a better finish, though they’ve been in similar spots trying to slow down and protect a lead in past years.

“Not having a scrimmage or a real preseason, we haven’t had a chance to work on that four-minute drill where you’re trying to slow it down and work the clock,” Dempsey said. “They did a great job stopping our run. Credit to them. With our guys up front being a little green, we’re going to have to figure out a way to incorporate our run game.”

Carr completed 15 of 30 passes for 236 yards and the five scores. Pezza had four catches for 91 yards and two touchdowns, while Schwab caught seven passes for 66 yards. Brickle led the ground game with 35 yards rushing on seven carries.

“We have the ability to run the ball with a couple of guys,” Zannella said. “When the defense comes up, Cam has the ability to go over their heads. It’s a nice combination. It’s hard to believe he’s only a sophomore.”

South Kingstown will jump into the heart of its Division I slate Saturday at Cranston East, with no other games on the schedule against the Power Four teams.

North Kingstown is set for a big one Saturday against defending state champion Bishop Hendricken.

“They’re going to be what they always are – big up front, athletic, talented,” Dempsey said. “It’ll be a challenge. We’re probably going to try to go with the same game plan we’ve had – try to get our athletes out in space and making plays. We’re hoping for the best.”