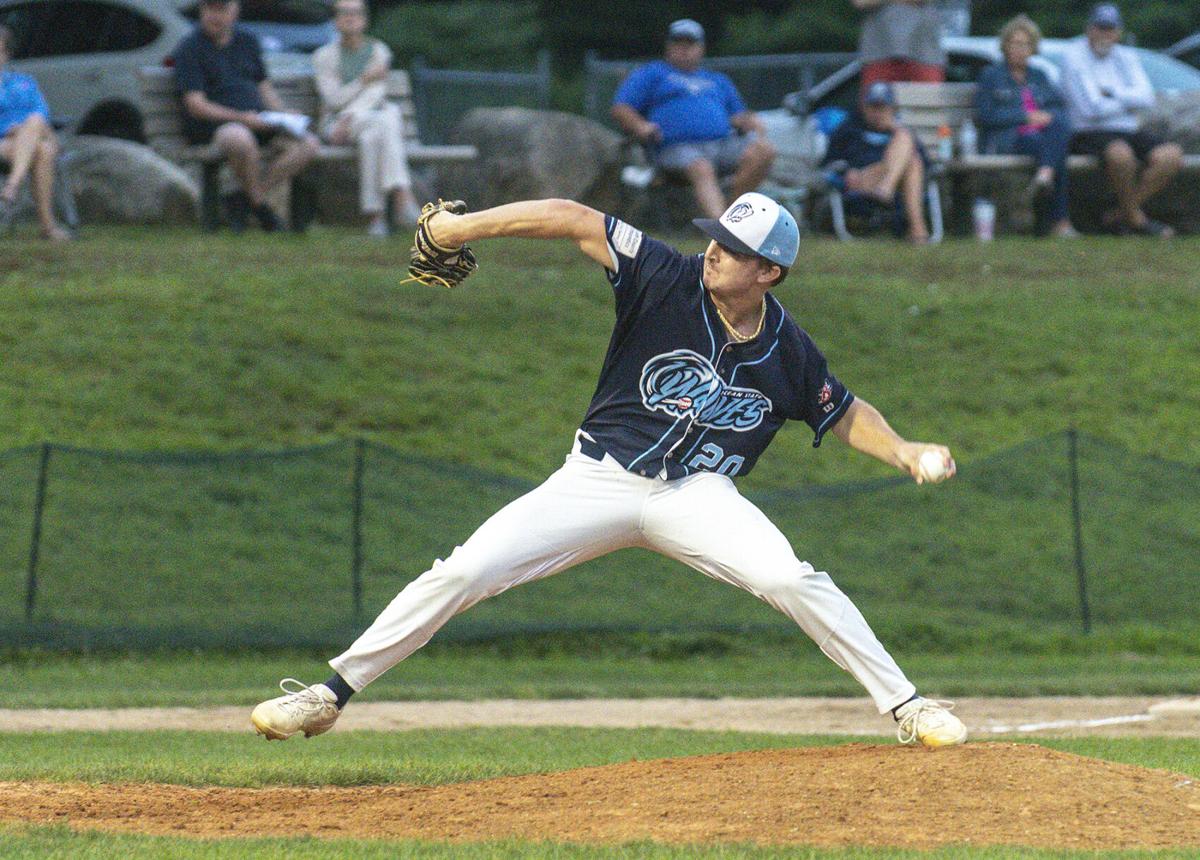 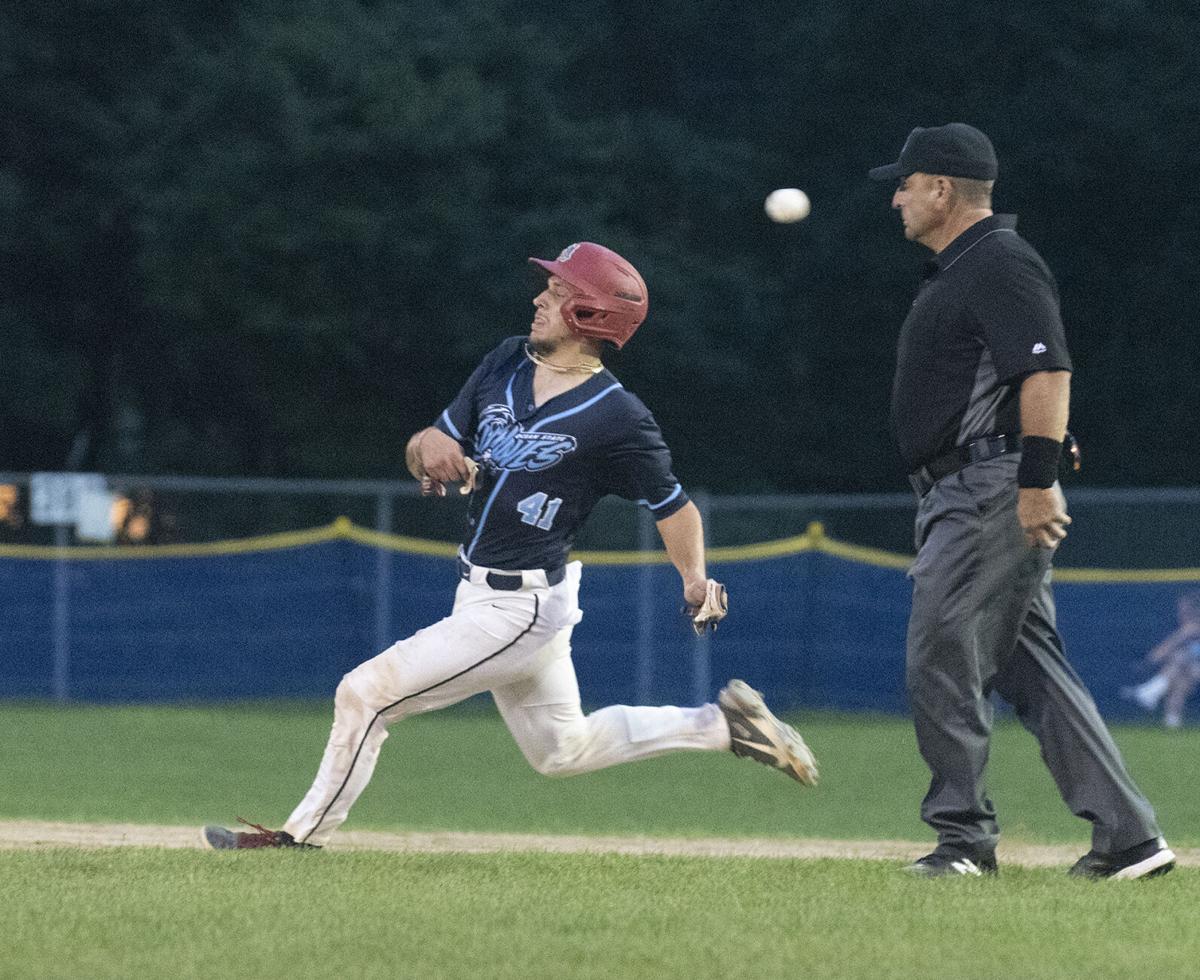 Jonathan Tuccillo, of the Ocean State Waves tries to beat the throw to second base during Saturday's game against the Martha's Vineyard Sharks at Old Mountain Field. 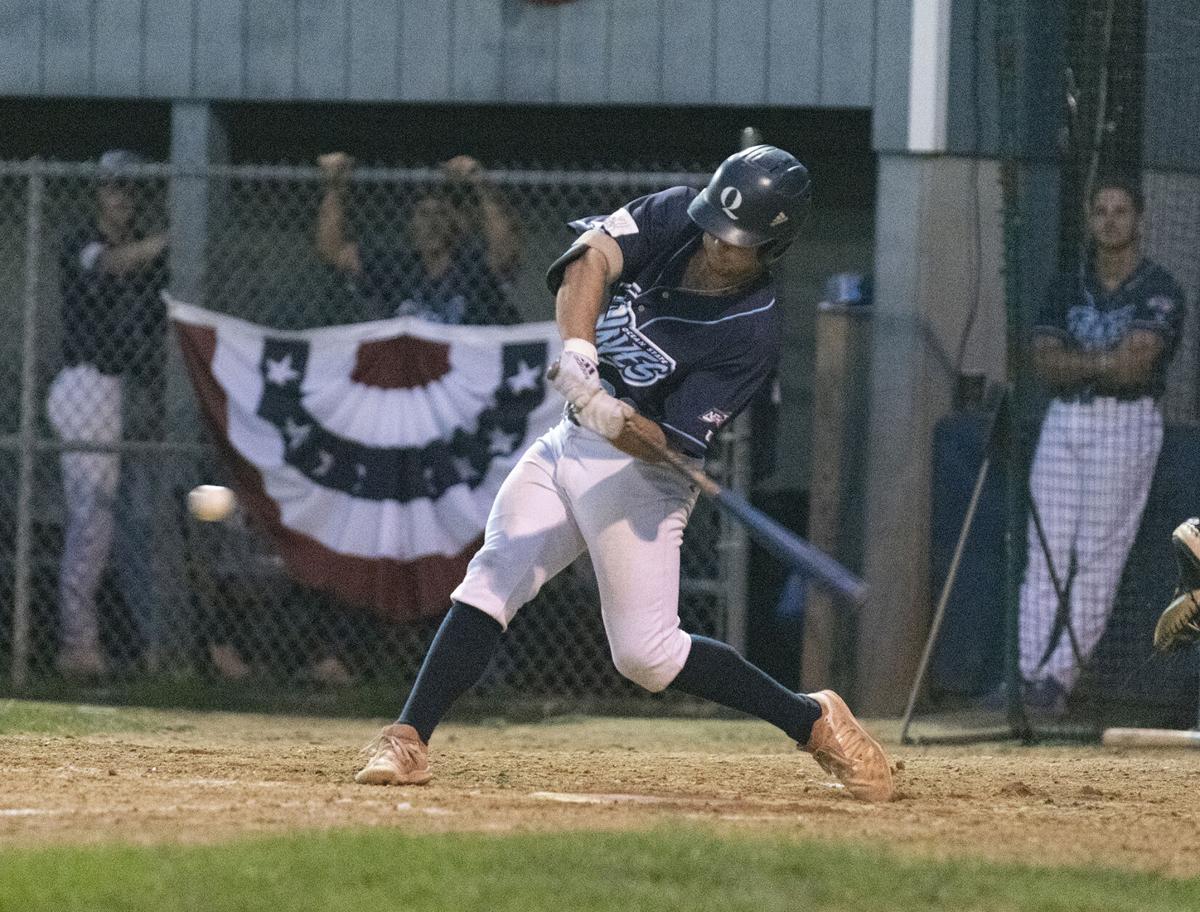 Ian Ostberg, of the Ocean State Waves swings at a pitch during Saturday's game against the Martha's Vineyard Sharks at Old Mountain Field.

Jonathan Tuccillo, of the Ocean State Waves tries to beat the throw to second base during Saturday's game against the Martha's Vineyard Sharks at Old Mountain Field.

Ian Ostberg, of the Ocean State Waves swings at a pitch during Saturday's game against the Martha's Vineyard Sharks at Old Mountain Field.

SOUTH KINGSTOWN — When they upset Mystic in the first round of the New England Collegiate Baseball League playoffs, the Ocean State Waves had the look of a team that could make a postseason run.

Some personnel losses and a strong top seed made that a tough task.

The Martha’s Vineyard Sharks swept the Waves in the best-of-three Southern Division semifinals, winning a 14-5 slugfest on Friday and riding dominant pitching to a 6-0 win on Saturday at Old Mountain Field, ending the season for Ocean State.

“Going into it, we lost some guys. We were down personnel for various reasons – injuries and it’s a grind,” said Waves manager Eric Hirschbein-Bodnar. “Guys get a test on their bodies. Some guys learn from it and other guys aren’t there yet. You roll out there tonight and you’re facing 91-95 miles per hour for the first seven innings, then 92-95 to end the game. It’s not easy. The guys battled. They gave us a chance.”

The Waves were the No. 6 seed for the playoffs after going 18-24 in the regular season. Having had seven players selected for the NECBL All-Star Game, they fit the profile of a dangerous club for the postseason, and the win over Mystic put the talent on display. They were the lowest seed to advance out of the preliminary round.

“Summer ball, there’s a feeling where you kind of want to go home,” third baseman Ian Ostberg said. “But it was cool when we got there – everybody bought in. There was an aura of competitiveness that we hadn’t felt all year.”

After game one was rained out last Wednesday and again on Thursday, the Waves made the trip to the island on Friday and got off to a perfect start. Kyle Maves led off the game with a single and Johnny Tuccillo followed with a two-run homer for the 2-0 lead.

Unfortunately for the Waves, the other half of the first inning represented a far better start. Martha’s Vineyard racked up seven runs on five hits to go up 7-2. A grand slam by Grant Norris was the big blow.

Ocean State starter Chris Chaney settled in remarkably well after the brutal start and didn’t allow another run over five innings, but the hole was deep for the Waves. They scored two runs in the third and one in the fifth to make it 7-5. The Sharks kept things from getting too interesting with another seven-run burst in the eighth inning.

“They’re obviously a really good team,” Maves said. “They’ve got big school guys and they’re a talented team. We lost some key guys with injuries and innings limit, things like that, and that hurt the vibe we had all year a little bit. It was still there, but we just didn’t have the same amount of guys.”

Offense was much harder to come by in game two, especially for the Waves. Martha’s Vineyard starter Jackson Nezuh of Florida State continued a terrific summer with his best start yet. He allowed just two hits and struck out 12 in seven scoreless innings.

“Hats off to their starter – one of his teammates described it as the invisible fastball,” Ostberg said. “He was really tough.”

The Sharks backed him with three runs in the second inning. The first scored on an RBI double by Collin Shapiro. The next two came in when nobody covered second on a stolen base attempt, with the throw sailing into center.

Waves pitchers Liam Dvorak and Colin Ahearn kept the score at 3-0, but the Sharks pulled away with three runs in the eighth. Thomas Balboni got the first out before leaving with an injury. Daniel Baruch walked two batters before a groundout. Martha’s Vineyard found two-out magic, getting an RBI single from Matt Woods, plus an error and a wild pitch for three more runs.

In the ninth, Waves reliever Shaun Gamelin made his final appearance of the summer and shined again, striking out the side in a perfect inning.

Martha’s Vineyard reliever Clark Klitenic finished the shutout with two strong innings. The Waves got hits from Ostberg and Luis Atiles in the eighth, and from Maves and Travis Honeyman in the ninth. All were stranded.

The loss ends a season that featured plenty of positives for the Waves.

“Our pitchers who were here – I think we had seven guys left – they went out and competed really hard,” Hirschbein-Bodnar said. “They gave us an opportunity to be in the game. At the end of the day, it wasn’t about winning and losing. We got here on will, grit and pure team.”